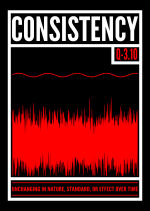 Unchanging In Nature, Standard Or Effect Over Time

Simplicity is the foundation of Consistency

Consistency is the third of the five F3 Leadership Virtues–the Habits and Ethics of moral excellence. The Consistent Leader is constant and regular in everything he does. His followers are drawn to him because his steadiness provides a safe harbor from the howling winds of Chaos and Flux that blow periodically through their own lives. He is their rock.

The Virtuous Leader may be a complex man–in fact, he would almost certainly have to be in order to be Effective. But he does not let his complexity cause him to be mercurial and inconsistent. Genius is of little use in a Leader if it comes with sudden changes of mood or outlook, because that promotes insecurity in his followers and erodes Trust within the Group.

To keep his internal complexity from leading to external inconsistency, the Virtuous Leader simplifies the aspects of his life that are subject to his direct control. He does this by putting as much as possible on autopilot so that he doesn’t have to consume energy thinking about them. The less energy he consumes on little things, the more Consistent he can be in the big things.

Simplification starts with the most elemental personal Habits. Every day Nick Saban eats two Little Debbie Oatmeal CrÃ¨me Pies for breakfast and a lettuce, turkey and tomato salad for lunch. Steve Jobs wore the same black turtleneck, blue jeans and New Balance sneakers every day. During his presidency, Barack Obama only wore gray or blue suits. He said that paring down his decisions about what to eat or wear helped him save energy for the important decisions he had to make. Simplicity is the foundation of Consistency.

The Leaders I was most drawn to in the Army were men so simple and regular in their personal habits that you could set your clock by what they did. The IMPACT they had on me resounds to this day. My office is very spare. I only have what I need and I keep it all in a specific location that never varies so that I never to look for anything. I park my car in the same spot every morning so that I can find it quickly every evening after a long day of thinking about more important things. Like Nick Saban, I eat the same thing almost every day and my wardrobe does not have much more diversity than President Obama’s does.

I do these things (and many others) to simply my life and promote Consistency with three objectives in mind:

First, the more decisions I remove from my daily life the more likely it is that I will continue to Accelerate. As we said in Q1.1 (the DRP), discretion is a cage with velvet bars. I don’t get up in the morning and decide whether to exercise that day. Because my Habits are so ingrained, I just find myself at a Workout every morning via a series of non-decisions that were easy to make because I didn’t have make them. By abandoning discretion to Habit, I have freed myself from having to decide.

Second, the more reliable I am in the small things, the more people will believe they can rely upon in me in the big things. Trust is one of the most critical components to the Prosperity of any Group. The decision whether to follow a man or share Leadership with him is founded upon it. The Virtuous Leader uses every opportunity he gets to remove doubt from the minds of his followers through radical Consistency in small things, because it is the small things in which they will most often see him engaged.

Third, simplicity reduces mistakes. KISS (Keep It Simple Stupid) is the antidote to Murphy’s Law that whatever can go wrong, will go wrong. The American military calls this tendency of events to become chaotic the “fog of war”. It is a theory based upon Clausewitz’ observation that war is the realm of uncertainty; three quarters of the factors on which action in war is based are wrapped in a fog of greater or lesser uncertainty. A sensitive and discriminating judgment is called for; a skilled intelligence to scent out the truth. For me to maintain Momentum through my “fog of life” I need a Truth sensor that is not clogged up by the minutiae of small decisions. Simplicity cuts through the fog.

Strong Routines are the framework of Consistency

A Brick is a singular positive Habit that is Advantageous to the individual who practices it or others that are affected by it. When several Bricks are joined together they form a Routine, and Routines are the basis of the Guardrails in a man’s life that allow him to Accelerate to Advantage. For example, getting out of bed early every morning is a Brick, as is stretching out the back and legs. By linking those Bricks (and others) together, the HIM forms a Routine that enables him to maintain the Guardrail of his King, the daily discipline of physically training his body.

Guardrails protect a man from the Flux, which is his emotional reaction to the peaks and valleys that appear with regularity throughout his life. It is that feeling of “backsliding” or “going through a rough patch” that we all periodically encounter. Because he is Consistent, the Virtuous Leader may appear to his followers to be immune from the Flux, but in truth his steadiness is only the fruit of his Preparedness. The HIM is a Pro who gets ready for the Flux because its onset is expected–he knows it is coming. He Prepares for it through the development of strong Routines that keep him moving along the right path every day despite how he feels about it on any given day. This provides him with an external framework for his Acceleration and frees him from having to overcome negative emotions in order to maintain his Momentum.

As a result, a HIM will physically train his body every day regardless of how he feels about it. It is not a decision fueled by emotion that gets him out there every morning, it is the Bricks that form his Routine which provide him the framework to be Consistent in his King.

The Amateur, in contrast, is a man who does not arm himself with Routines. He allows the Flux to roll over him, periodically exposing his emotions to the shifting winds of circumstance like a man who leaves his windows open in a thunderstorm. As a result, his nature, Standards and effect vary over time. This makes him inconsistent and renders him un-Virtuous.

As a result, an Amateur will only Post workout when he feels like it. When his Flux is favorable, he will have a period of consistent Posting. But when (as it always will) the Flux swings against him, he will not be able overcome his negative emotions sufficiently to maintain the Momentum of his King. The Flux lies at the heart of Pogo-40 and it ruled over me until I began fighting against it by turning Pro and building strong Routines.

The Virtuous Leader focuses on bandwidth not perfection

The existence of the Flux is a matter of Truth, which is a transcendent fundamental or spiritual reality that requires no real explanation because it is self-evident. He may call it by a different name, but every man knows the Flux exists because he has been living within its grip since he was a boy. Fighting the Flux through the building of Routines is a matter of Wisdom, which is practical insight with spiritual implications. Truth is what you know and Wisdom is what you learn about it.

A man can obtain Wisdom though other men who already have it by the process of Positive Habit Transfer that we described in Q2.4. Or he can learn it the hard way through Collision Learning, by gaining it through Failure, Argument and Adversity . For me, learning to fight the Flux through Preparedness came the hard way. I had to Collision Learn it.

Due to the ever present nature of the Flux, and the fact that we are all faced with dynamic circumstances outside of our control, it is impossible to reach a point of perfection where one’s nature, Standards and effect are exactly the same every day. There will always be fluctuation. Knowing this, the Virtuous Leader Accelerates his Consistency by focusing on the bandwidth of his fluctuation rather than perfection. His objective is to reduce the distance between his peaks and valleys to something so infinitesimal that only he can see it.

For me, the effect of the Flux in my life has always been triggered by my physical fitness. As that goes, so goes everything else in my life. I know that if my King and Queen Decelerate, my Jester will run rampant and I will lose Relational Rhythm with my Concentrica and contact with the SkyQ. When I was an Amateur I suffered from wild swings in my fitness that rendered me inconsistent and incapable of Virtuous Leadership. Today, having Collision Learned about the Flux and its control over me, I have strong Routines that allow me to maintain my fitness level within an ever-tightening tight bandwidth.

I only discovered the effect of Flux after I left the military, where my weight had rarely fluctuated by more than five pounds for a nine year period. I mistakenly attributed this apparent Consistency to my own self-discipline, but the truth was quickly revealed to me in my first six months as a civilian. Without periodic weigh-ins and unit physical training I had neither the Incentive to stay physically fit nor any self-generated positive Habits upon which I could rely when the Flux would inevitably hit me. “Liberated” from the strict Routines of military life, I immediately became subject to Pogo-40, gaining and losing the same thirty to forty pounds on a repetitive loop until F3 taught me to be a Pro.

From the Adversity of Pogo-40 I learned that I was a Mascot. I had only appeared to be Consistent when I was a soldier because I had been protected by external Routines that I neither built nor maintained for myself–the Army had provided them to me. Once they were removed, I was revealed for what I truly was, an Amateur whose lack of Preparedness left me constantly exposed to the Flux. Until I learned to build my own Routines the bandwidth of my Fitness, Fellowship and Faith was like a roller coaster.

Whenever my roller coaster was in steep descent I was an insentient zombie, immune to any warning about the jolt of the bottom to which I was heading. As an Amateur, I had no Shield Lock to provide me with Accountability and Correction. Because I lacked Candor, I was unwilling to graciously receive a word of hard Truth that might have snapped me out of it. Inevitably and repeatedly I would have to suffer my own Cat Kicker–a man’s final screw-up before he hits his bottom–before I could begin ascending again.

Now, having recognized the Truth that the Flux exists and the Wisdom of using Guardrails to fight it, my focus is on continually narrowing the bandwidth of fluctuation in my life. To do this, I depend very little on my own motivation and not at all on my emotions. Instead, I rely upon my Shield Lock to hold me Accountable and strong Routines to provide simplicity and relieve me from the distraction of discretion.

This is the foundation and framework of Consistency. Without it, a Leader cannot be Virtuous. 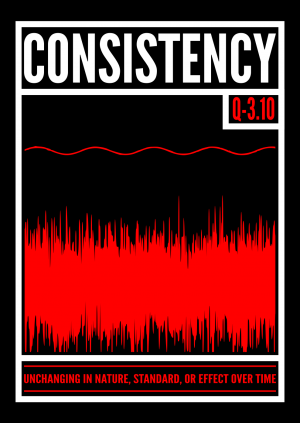