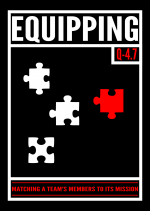 Matching A Team’s Members To Its Mission

Teamwork is a cocktail of concerted effort

Teamwork is combined action that is efficient and potent. It requires proficient performance by each Member of the Tasks that are essential to the Team’s Mission. The Q initiates Teamwork by ensuring that he has the right men for the right jobs, and reinforces Teamwork by keeping it that way once he has found the right combination. The Q Equips his Team by matching men to Mission.

Equipping cuts against the grain of the culture. Where Goo Nation would have us work to improve our weaknesses and get out of our Comfort Zones, Equipping requires a man to Side Source them and focus his energy primarily on his strengths for the betterment of the Team. Doing (mostly) only what each man does best, the Members of a Team combine their actions into a potent and Dynamic cocktail of concerted effort.

Although it cannot perpetuate without Virtuous Leadership, Teamwork between individuals often springs into ad hoc existence. People are pretty good at recognizing what they lack and seeking it in others. Or (even less intentionally) people will combine for reasons other than developing Teamwork, only then to recognize that they are more Prosperous as a Team then they were as singletons.

Marriages are like that, in both ways. Men and women know that they need each other and are biologically driven to seek out a partner. Then, if the relationship “works”, it perpetuates–at least and until it enters a season of discontent. That’s when Leadership becomes necessary. Having come together by accident, an un-Led Team will likely disintegrate by accident when tough sledding requires the Members to give more to the Team than they feel like they are getting from it as individuals. Whether it’s a marriage or a business partnership, accidental Teamwork must be reinforced by deliberate Leadership or it will die.

The Q’s first step to Equip his Team is to determine all the Tasks that it will need to perform in order to accomplish its Mission. From there, he sorts out the Mission-essential Tasks–the things that absolutely and positively must happen for the Mission to succeed. The other Tasks may be important aids to Mission performance, but they should never take precedence over the METs.

If, for example, the Team’s Mission is to conduct an armed robbery of a bank in order to steal the money, the Q would likely identify at least four METs: 1) planning/directing the robbery; 2) subduing the bank customers and security guards; 3) safecracking; and 4) driving the getaway car. Planning/directing, subduing, safecracking and driving are the METs, the things that absolutely must be done right for the robbery to succeed. Buying stockings to pull over their heads during the robbery would also be a Task, maybe even an important Task (particularly to the Team Members who don’t want to go to jail), but it is not a MET because the robbery can still be successfully accomplished without masks.

Once the Q has identified all of the Team’s Tasks and sifted out the METs that must be moved to the top of the list he is ready for the second step of Equipping, which is to recruit and/or train the men required to perform the Mission-essential Tasks.

Within the framework of our bank robbery example, this would require the Q to recognize that planning/directing, subduing, safecracking and driving require four different skill sets which must be performed more or less simultaneously, the Q recruits four separate men to do them. If four proficient men are not available, he recruits the willing and trains them to proficiency.

Each MET will require excellent individual performance for the Mission to be jointly accomplished. Without planning/direction, the Team’s efforts will be disjointed and impotent. If the bank’s customers and guards are left free to roam, they might impede the robbery by direct action or by calling the police. If the safe is not cracked, the money will stay safe from their grasping hands. If the driver is incompetent, the crew won’t be able to escape with their loot.

The Q’s final step in Equipping is to make necessary changes in Membership to correct misalignment with Task.

If it turns out that the man the Q recruited to drive is myopic but calm and highly skilled with firearms, while the man recruited to subdue is way too jumpy for a job like that, the Q is quick to fire his subduer and replace him with his driver. While that means he will need a new driver, Teamwork will suffer far more from the misalignment if the Q doesn’t take action.

One thing the Q of a Dynamic Team does not do is shuffle the Members for any reason other than to execute a Black Tahoe. Once he has found the right combination of Members to match Mission he reinforces Teamwork by keeping it that way. U2 has had the same four men playing the same four instruments for thirty years. The Edge sings on exactly one song, and it’s the worst song in the band’s catalogue .

Whether it is a band of musicians or bank thieves, Teamwork is critical to Dynamism.

A Team Member must know (and accept) his role

One of my favorite bits from The Rock’s WWF days is when he would ask a guy a question only to interrupt the answer by declaring “it doesn’t matter what you think, your job is to know your role and shut your damn mouth”.

Now I know that was only a part of The Rock’s shtick and am not proposing that any Q ever speak to a Team Member that way. But, as there is with so many of his little quips, there is an underlying piece of Wisdom in The Rock’s admonishment to know your role. If a man doesn’t know his role within the Team’s Mission, how can he possibly expect to perform it?

Some men are born to plant and some to water, but it’s the Q’s job is to make sure that he knows which is which. He can only do this by truly knowing each man, maybe better than the man knows himself. That is why a Team requires Proximity between its Members, so that the Q can build Trust within the Team and observe its Members under Hardship. Only then will he know what each Member is capable of and what role he is best suited to perform for the Team to Prosper.

There are abundant tools that can help identify a man’s optimal role, like StrengthsFinder and Myers-Briggs, and the Q should avail himself of any that he believes are effective. But ultimately he will have to rely on his own judgment, match man to Mission and accept responsibility for the Outcome–which is often a Failure. There will be times when all indicia point to a man being a great driver, except for his actual driving. The same man may turn out to be a great subduer or planner/director, but the Q will never find that out unless he is willing to Black Tahoe the man so that he can try.

And that is actually the easier part of Teamwork. The harder part is convincing a man to accept a role he doesn’t like or want but for which he is best suited within the Team. It is inherent in our hard-wired ego to see ourselves in a certain way, despite the abundant evidence to the contrary. Watch a single episode of American Idol and you can see the power of self-deceiving mirror. Only a few of the contestants can really sing, but they have all convinced themselves otherwise.

When I was an Army officer I was completely resistant to the idea that I was more effective on staff than in command. In fact, I still don’t want to believe that, even though all I have to do is look at my OERs to see that it was true. Like every combat arms office I wanted to be the second coming of George Patton, but that wasn’t the role I was born to play. Ultimately, because I was so well Led, I learned to accept my role because that is where my hard-wired Skill best served the Team.

The Q will often find himself with highly talented Members who are determined to plant when they were born to water. For the Team to be Dynamic he must learn how to Persuade such men to subordinate their will to the Prosperity of the Team. If they won’t, the Q must be willing to Black Tahoe them off the Team and replace them with another man who is more willing to adapt, even if he is less talented to perform. 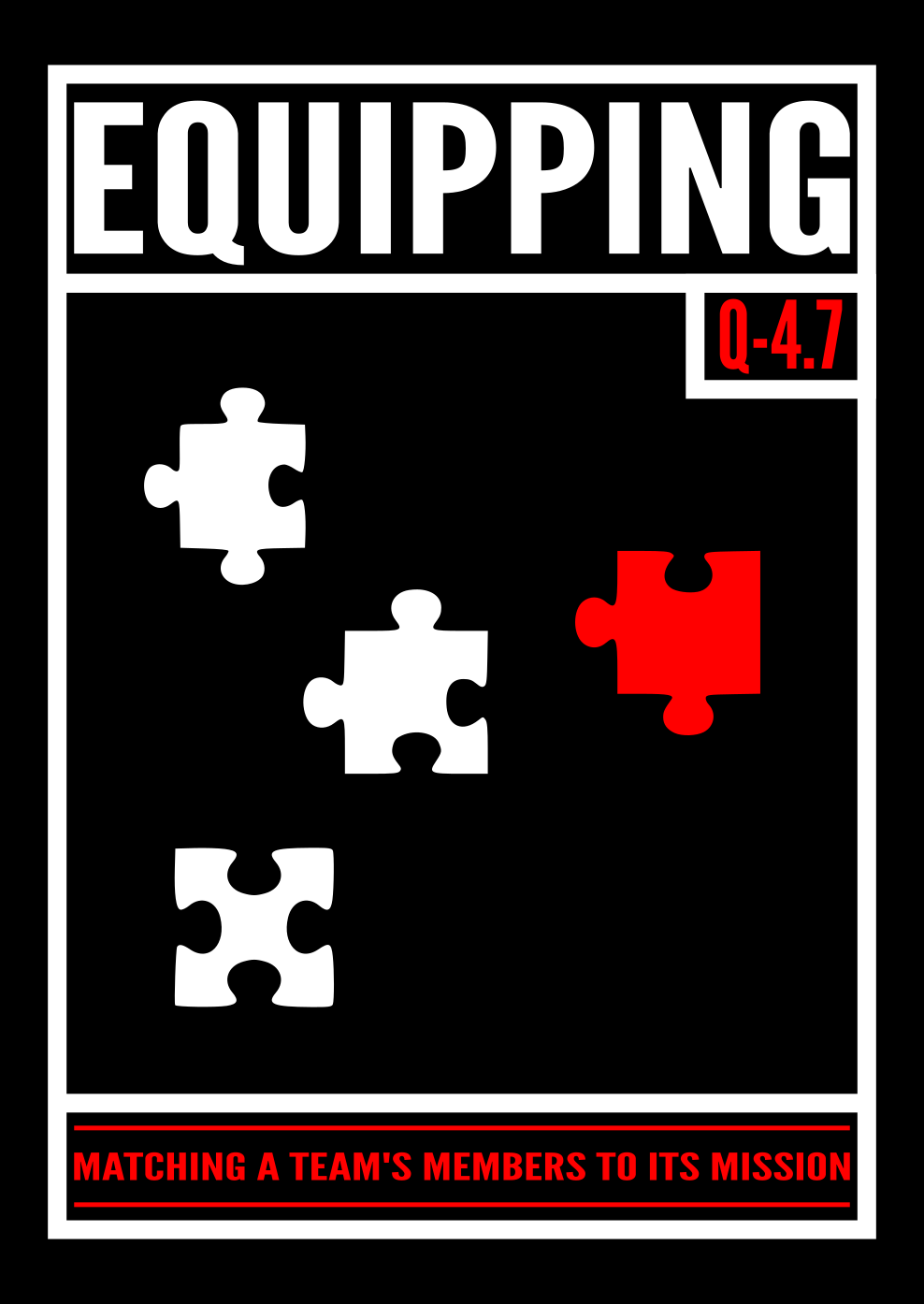 The one who plants and the one who waters have one purpose, and they will each be rewarded according to their own labor.