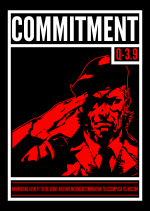 Loyalty requires abandonment of self

Commitment is the second of the five F3 Leadership Virtues–the Habits and Ethics of moral excellence. Commitment has two components, unwavering loyalty to the Group and unflinching determination to accomplish the Group’s Mission. The former is focused more upon the Group as an entity and the Members that comprise it while the latter concerns the Purpose for which it was formed. Because he is Committed, the Virtuous Leader is both loyal and determined.

Loyalty is firm and constant support and allegiance manifested through the subordination of one’s own well-being to the Prosperity of the the Group. A Loyal person puts the interest of his Group and the needs of its Members before his own. In his decision making, he is concerned first with the impact a course of action will have on the Group and only secondarily upon himself. His relationship with his Group and its Members is that of a fiduciary, in that he is charged with a special duty of Trust that obligates him to safeguard its Prosperity in everything he does.

To be Loyal a man must be obedient, meaning that he must willingly submit to higher authority within the Group. Note that obedience alone is not Loyalty, as a man can be obedient without being Loyal. Most convicts will obey the warden’s rules without a shred of Loyalty to the prison system that appointed him.

The inverse however is not true. Loyalty to the Group requires thoroughgoing obedience to its Governance. I cannot be a loyal American if I reserve the right to disobey the just decrees of its duly elected and appointed officials whenever I find them personally inconvenient or morally repugnant. Nor can I be a loyal Member of my church if I am determined to decide for myself which of its doctrines I will accept based on my own theological views.

In either case, if I found that I could not submit to the authority of the Governance I would only have two Virtuous choices. I could either depart the Group–in recognition that remaining and disobeying makes me disloyal, or I could stay and become a member of the Loyal opposition that obeys the Governance while openly seeking to change its policies or composition. To remain and disobey is not a choice, it is disloyalty and thus un-Virtuous.

There is an exception to the obligation to obedience, in that it is not disloyal to actively resist unjust decrees promulgated by a Governance that is not duly elected or appointed. In fact, Loyalty to the Group may require disobedience to its Governance where it has exceeded its delegated authority or is abusing it to the Disadvantage of the Group or its Members. Within any Group (other than those that are inherently unstable), this would be a very rare occurrence. Before embarking on a course of Loyal disobedience, the Virtuous Leader must exhaust all other peaceable alternatives and deliberate sufficiently such that his conscience leaves no other option. Anything less risks brigandry.

This call to Loyal disobedience finds its logical and ultimate end at the heart of the founders’ sober declaration of our nation’s uncoupling from England:

Governments are instituted among Men, deriving their just powers from the consent of the governed, That whenever any Form of Government becomes destructive of these ends, it is the Right of the People to alter or to abolish it, and to institute new Government, laying its foundation on such principles and organizing its powers in such form, as to them shall seem most likely to effect their Safety and Happiness.

Because they believed the crown to have exceeded its authority, the signatories of the Declaration Of Independence did not consider themselves disloyal in their disobedience to its dictates. And, because they were men of Virtue who recognized that Loyalty cannot be divided, they publicly announced their determination to do so. Thus, it was with regret that Thomas Jefferson wrote:

Believe me, dear Sir: there is not in the British empire a man who more cordially loves a union with Great Britain than I do. But, by the God that made me, I will cease to exist before I yield to a connection on such terms as the British Parliament propose; and in this, I think I speak the sentiments of America.

In their decision to Loyally disobey, Jefferson and the other signatories to the Declaration placed the interests of the Community of American Colonies far above their own. Through their deep sense of unwavering Loyalty they subordinated their own wealth, lives and liberty to a cause far greater than their own advancement. By this, they demonstrated Commitment of the highest order.

Determination requires bold will to action

Unwavering Loyalty to the Group is only one half of Commitment. The other half is unflinching determination to accomplish its Mission. While Loyalty manifests itself most often in the things a man won’t do, determination is measured by the things he will and does do. Loyalty without determination may be Virtuous, but it is not Commitment and it is Commitment that is an Essential Leadership Virtue.

Ulysses S. Grant was the fourth Commanding General of the US Army during the Civil War. His immediate predecessor was Henry Halleck, whose nickname was Old Brains (likely, not entirely a compliment). Due to his inherent caution and focus on administration and planning, President Lincoln called Halleck “little more than a first rate clerk”. Frustrated by his inability to end the war (as he had been with the two men who had preceded Halleck) Lincoln replaced him with Grant in March of 1864.

Recognizing that victory required nothing less than the destruction of the Confederate Army, Grant immediately invaded Virginia and met Robert E. Lee head-on in some of the bloodiest battles of the entire war. After twice being fought to a draw by Lee’s much smaller force, Grant (unlike his predecessors) declined to return to Washington to lick his wounds and “reorganize”. Instead, he tersely advised Lincoln of his intentions to press on against Lee: I propose to fight it out on this line if it takes all summer.

And he did. Despite horrific casualties that earned him the label of the “Butcher” by the press, Grant boldly pressed on with unflinching determination to surround Richmond and destroy the will of the Confederate Army to continue the fight. Lee surrendered less than a year later.

Grant’s predecessors may have been Loyal (there is no evidence otherwise), but they did not possess Grant’s unflinching determination to accomplish the Mission. They lacked the bold will to action required to press on through the dirty, dangerous and difficult Obstacles that arose in their path. Although they each enjoyed tremendous material advantage over the Confederate Army, they all timidly searched for a way to not-lose the war rather than boldly trying win it. Grant alone had both the unwavering Loyalty and unflinching determination that comprise the Essential Leadership Virtue of Commitment.

While very few men will encounter circumstances as dire as the ones that confronted Grant during the Civil War, every Group has a Mission that its Leader must see accomplished for his Group to Prosper. Inevitably, along the path toward Mission accomplishment there will arise Obstacles that invite the Leader to flinch, to turn his Group aside in search of an easier course. It is then that the Leader’s character will be revealed–either he will press on and fight it out along that line, or he won’t. Determination requires bold action.

To the un-Virtuous Leader there is a contradiction between Loyalty and determination. He cannot see how a Leader can provide for his men’s welfare and accomplish the Mission if accomplishing his Mission puts his men in harm’s way. To resolve this apparent conundrum, the in-Effective Leader chooses men over Mission by asking nothing of them, like Halleck seeking not to not-lose the war. In contrast, a merely Effective Leader nods in pretense to the care of his men in search of the personal aggrandizement attendant to victory.

Neither is the path of the Committed Leader. He alone understands that the tension between Loyalty to the Group and determination to accomplish its Mission forms the Paradox Of Commitment that confronts all Leaders. The Virtuous Leader resolves the Paradox by prioritizing Mission accomplishment above everything else, while always taking care of his men. Mission first/men always.

War provides a stark example of the Paradox Of Commitment. Loyalty to the Union’s Army required Grant to put the welfare of his soldiers before his own, but determination to accomplish the Union’s Mission compelled him to expose those same soldiers to injury and death. To maintain Mission first/men always Grant did several things. First he provided his soldiers with the best equipment and training possible to increase their chances of survival on the battlefield. Then he ensured that his battle plans were carefully drawn to guarantee the maximum reward possible with the minimum risk required. During combat, Grant placed himself as close as feasible to the forward edge of the battle area to enhance the speed and effectiveness of his decision making. In all things, he ensured that no man’s life was wasted to win the battle. Mission first/men always.

The Paradox Of Commitment applies to any human endeavor where Leadership is invoked. When Vince Lombardi coached the Green Bay Packers winning was the team’s Mission. To reinforce that Mission in the minds of his players and coaches Lombardi constantly reminded them that “winning isn’t everything, it’s the only thing”. His unflinching determination to accomplish the Mission is reflected in the fact that he won almost 75% of the games he coached and three three consecutive NFL championships.

But winning came at a price, measured both by the players’ sweat and blood on the practice field and Lombardi’s willingness to Black Tahoe a man to make room for another whose superior skill gave the team a better chance to win. For Lombardi, the sacrifice required by the Paradox Of Commitment was made possible only through love:

I don’t necessarily have to like my players and associates but as their leader I must love them. Love is loyalty, love is teamwork, love respects the dignity of the individual. This is the strength of any organization.

For Lombardi, love was not optional–as their leader I must love them. Without love, the Paradox Of Commitment is impossible to resolve. An Effective Leader who lacks Commitment will focus solely on the Mission to the detriment of his men–he might succeed for a time but eventually they will figure out that their welfare is his secondary concern, that he doesn’t love them more than he loves himself. In contrast, the in-Effective Leader’s Loyalty to his men may be appreciated by them–but ultimately they will realize that he doesn’t love them enough to respect their willingness to sacrifice their Personal Comfort to a higher Purpose.

Only through love can the Virtuous Leader maintain the proper tension between man and Mission. As we said in the very first QPoint, a great Leader’s Legacy is built on love. 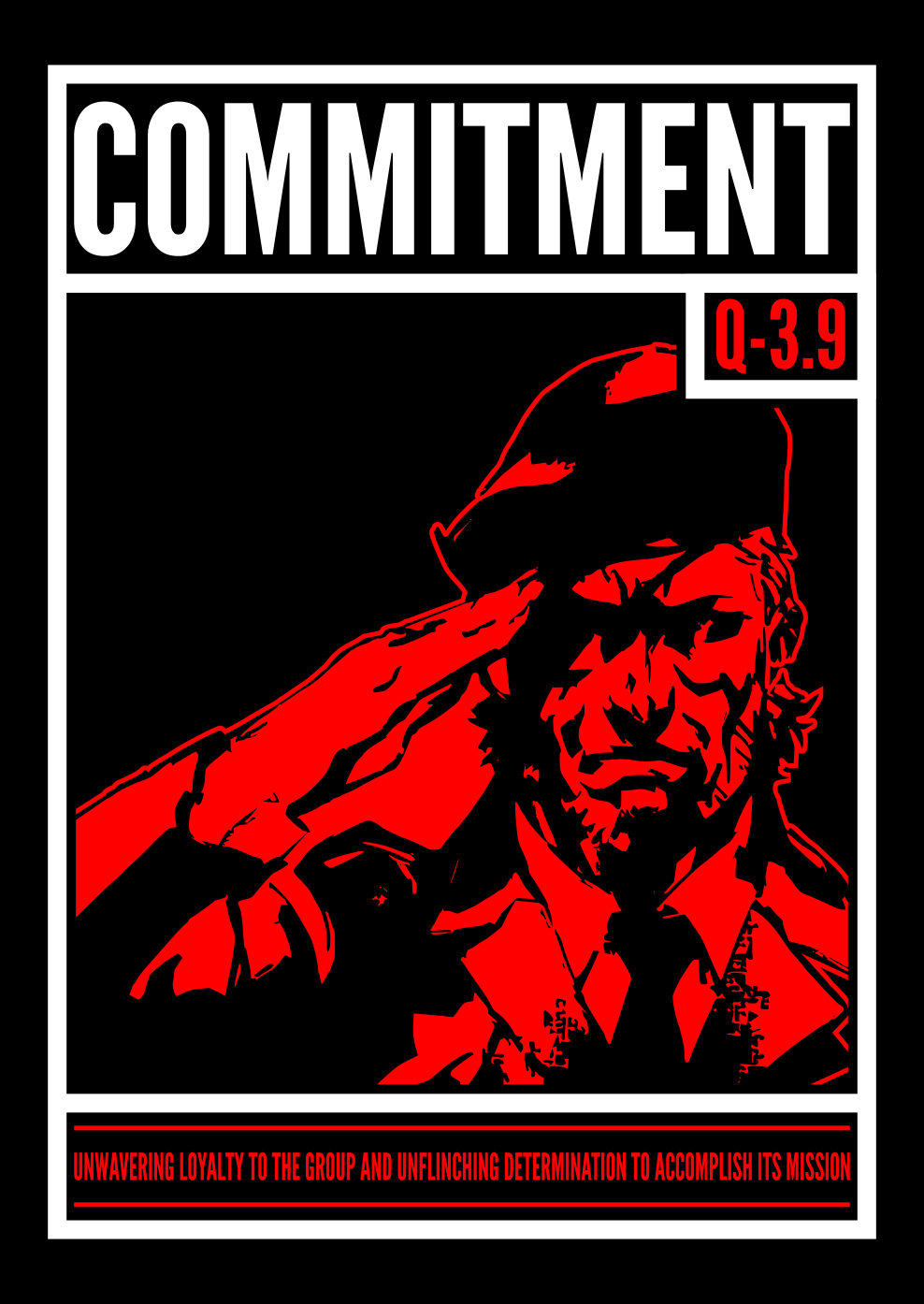 But if serving the Lord seems undesirable to you, then choose for yourselves this day whom you will serve, whether the gods your ancestors served beyond the Euphrates, or the gods of the Amorites, in whose land you are living. But as for me and my household, we will serve the Lord.