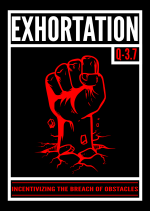 Incentivizing The Breach Of Obstacles

Exhortation is encouragement on steroids

Obstacles are Problems impeding Movement that must be solved before the Group can continue forward. If an Obstacle arises before the Group has Accelerated into full Momentum, it can stop Movement in its tracks, no matter how small it is. Such is the power of the Status Quo to suck a man back to earth just as he has started to fly.

While Exhortation is the last of the four F3 Leadership Skills, in many respects it is the most important because, without it, nothing happens. Just as no plan (no matter how brilliant) survives first contact with the enemy absent Leadership, no Vision (no matter how powerfully Articulated) will sustain Movement through the first Obstacle it meets without Exhortation. It is part of the blocking and tackling required to execute the play the Leader draws up on the whiteboard.

Because he is Prepared, the Effective Leader expects Obstacles to appear in his Group’s path and stays ready to Exhort his followers to breach them by Incentivizing them into pushing through what they may see as an impenetrable wall. The Effective Leader does this Dynamically, with energetic and vigorous force. Through Exhortation, he changes his Group’s perception of an Obstacle from an unscalable mountain into a molehill that can be traversed through persistence.

While Exhortation is encouragement on steroids, it must always stop short of compulsion. If a Leader resorts to bullying his followers, he is a tyrant not a Leader. Although the line between Exhortation and tyranny is clear, it cannot be objectively drawn because it depends on the nature of the Obstacle and the relationship between the Leader and his followers. Much like the Supreme Court’s view on pornography–while a Leader may not be able to define it, he must know it when he sees it.

Fear of Pain and Chaos is a powerful Obstacle

By nature, people seek Personal Comfort by avoiding anything that might cause them the Pain of emotional or physical Hardship . As a result, fear of Pain is a powerful Obstacle to Movement, which is why the Status Quo remains such a compelling place in the heart of the procrastinating men that we all are. It is there, as compared to Movement, that the Pain that necessarily results from change can be avoided. And we do not like Pain. We are animals programmed for survival to avoid it. Movement causes change and change results in Pain. Thus, the brain screams at the body to stay right the heck where it is. And the body usually obeys.

The Chaos of uncontrollable circumstances is Pain’s evil twin Brother. Like Pain, Chaos naturally results from Movement away from the Status Quo. When we Move, we encounter new ground, new people and new circumstances which (because they are new) present us with challenges we have never before confronted. And, since we haven’t seen them before, we are naturally afraid that we will not be able to rise to them. Thus, like fear of Pain, fear of Chaos is a powerful Obstacle to Movement.

Note that we are not saying that it is Pain and Chaos themselves that inhibit Movement, but only the fear of them. This is because a man must be in motion to actually feel Pain and encounter Chaos, and if that is true he must not have let fear of either condition bring him to a grinding halt. In other words, he has somehow set aside his fear of Hardship sufficiently that he could keep moving forward. And when he does, he generally discovers that he has enough moxie to drive through both Pain and Chaos–the fear of the Hardship was far worse than the Hardship itself.

Empathy and Correction are both necessary elements of Exhortation

Picture a man who has been Persuaded that his sedentary and solitary life is to his (and his Concentrica’s) Disadvantage. He decides to initiate Movement by departing from the Status Quo of his Fartsack for an F3 Workout. Because we start at 5:30 (that’s in the AM) on most weekdays, he will have to get up a lot earlier than usual–that’s Painful. Because he has no idea what will take place there (except that he will be exercising), that’s Chaotic. To actually Post, he will have to set aside his fear of Hardship so that he can experience the Pain and Chaos firsthand.

If he accomplishes that, and becomes an FNG , he will find himself exposed to cold, heat, rain, cigarette butts and all the other things the SkyQ and man puts outdoors–that’s Painful. Because he’s been sitting on the couch (or plodding along on the elliptical trainer in a nice warm gym), the raw intensity of an F3 Workout will initially take his breath away, and maybe even make him throw up–that’s Painful. Finally, because the men the FNG will find there have already gone through what he is experiencing, he will find himself bringing up the rear at first–that’s Painful, emotionally. Exacerbating the Pain will be that he will have no control over any of it, other than to quit. If he sticks it out, he will just have to accept the Chaos. There is no other way.

What the man will find is that the actual Pain and Chaos of less sleep, cold rain, Splashing Merlot and his perceived Shame at being the Six (for a while anyway) are mere molehills to the mountain that his fear of these things was–just as long as he doesn’t quit. And keeping him from quitting is where the Exhortation comes into play. The Q must do more than merely encourage him to drive on, he must find a way to Incentivize him to breach the Obstacles of Hardship. This is why we say that F3 is not an Organization with Leaders, but an Organization OF Leaders. Exhortation is what is necessary to spread a Movement with as many Obstacles as we have. It’s not like starting a book club, where vomiting at the first meeting is possible but very unlikely.

What makes a Leader a highly skilled Exhorter? There are probably as many factors as there are Leaders. But there is one common underlying element to all Exhortation, and that is empathy. The Q knows what the FNG is feeling because he felt the same way when he started out from the Status Quo. Exhortation starts right there, with an expression of “I know how you feel Brother. I was there, right where you are and I know how that feels. I have not forgotten. But, there is hope and that hope is how I feel now.” In F3, we call this the Was-Now, which stands for there I WAS, then this happened, and here I am NOW.

Telling a man that the Pain he feels is natural is critical to Exhortation, but it’s not the whole story. Exhortation also requires the Leader to dispense the hard kind of love that Influences Movement. It’s the kind of love that responds to “I can’t”, with “bullshit, you just won’t”. That is why F3’s Credo is leave no man behind, but leave no man where you find him. Though empathetic to how you feel when you start, we love you too much to let you stay there.

When I look back at the Leaders who have most IMPACTed me in my life, I see that they were all a bunch of jerks. Not jerks in that they abused me, but in the sense that they declined to let me wallow in my own excuses for non-Movement and jerked me out of my cloud of self-deceit. They were the kind of jerks who called bullshit on my desire to procrastinate by forcing my lips off of the Crackpipe Of MaÃ±ana so that I could inhale the clear pure air of right-the-heck-now. They Dynamically Shame-Goaded me to set aside my fear of Hardship so that I could feel Pain and Chaos for myself and learn that it wasn’t strong enough to stop me. By jerking away my crutches they freed me to walk boldly.

When you try to picture a guy like that in your life do you find yourself resorting to movie characters? We ask that because true Exhortation is a very rare thing. It is much more common for people who call themselves leaders and mentors to accept excuses rather than reject them. What we lack in real life we create for ourselves in fantasy life.

Thus the question about Exhortation. Can you name a man in your life who is an Exhorter who exists outside of a celluloid fantasy? If you can, you are lucky. If you can’t, maybe its high time you became that kind of man yourself.

They are in short supply. 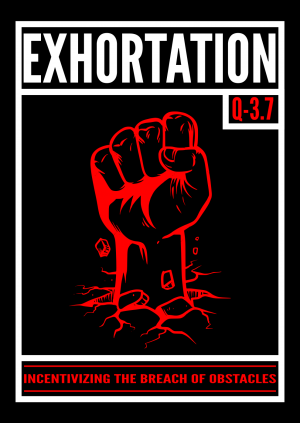