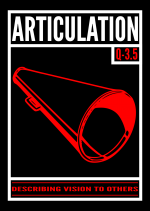 Describing Vision To Others

Every person can Articulate, but most most people choose not to

An Articulated Purpose is a Visualized end-state that is substantively distinct from the Status Quo. Its accomplishment requires certain actions that, cumulatively, form a Movement along a pathway of Waypoints toward the end-state.

The more radically unique the Vision is the more Movement it will take to see it through–which will require the participation of other people. The Virtuous Leader Influences others to work cooperatively toward the accomplishment of his Vision by igniting a palpable desire for action in their hearts. But first, before they will take a single step, he must tell them where they are going by Articulating his Vision in a way that can be easily understood and remembered.

Articulation is a skill that is distinct from Visualization. Unlike Visualization, Articulation is not something that every person can and does do. Regardless of how compelling they are, very few Visions make it outside of the heads of the people who have them. This is not due to people being incapable of explaining their ideas. Every person with a functioning tongue in their head has the capability of Articulating. It is not can thing, it is a won’t thing. The great majority of people don’t Articulate what they have Visualized because they simply choose not to do so.

We don’t mean to imply that people who choose not to Articulate do so out of selfish or feckless reasons. In fact, we think most people would rather share their beliefs, but are obstructed from doing so by the self-defeating perceptions that: 1) they aren’t very good at it, and 2) people will reject their Vision.

You might expect us to say now that these Articulation-obstructions are mythical and throw out some Oprah Bomb like “yes little Snowflake you are good at it” or “there are no stupid ideas”. But that would be unhelpful because there is quite a bit of truth in both obstructions. Most people are not very good at Articulation (when they first start out) and people (at least initially) are resistant to change. But while these obstructions do exist, they can both be overcome by any person determined enough to do so.

Articulation is a Skill that improves with Practice

A basic premise of F3 is that as we are a self-led Organization of Leaders. We do not bring in and pay personal trainers to lead our Workouts. We are so adamant about this principle that it forms one of the five Core Principles that form the Guardrails of our Organization. Putting this principle into practice means that every man who joins F3 ultimately finds himself leading a Workout for the first time, an event we affectionately refer to as his Virgin-Q .

Because he has never done it before, a man’s Virgin-Q is usually a Failure, an undesirable Outcome that builds his Leadership Foundation . He may be embarrassed by his performance, but the men he is leading (who have already put their Virgin-Qs behind them) are certainly not. They have walked in those crazy shoes and know how it feels. So they tell him the truth: “yeah, that was bad, but it gets nothing but better if you are willing to keep trying”. Every time a man takes the Q, every time he Leads, he improves incrementally. All that is required is the willingness to press on and keep trying. Through Practice, the practical application of a Skill to turn head knowledge into heart knowledge, he becomes increasingly Competent. It is what a Pro does to increase his Preparedness.

In Freed To Lead we call this process “The Museum Of Failure” because that is what the man who trained me called my own dumpster-fire of a Virgin-Q in the Army. He knew it was bad. I knew it was bad. Every man present knew it was bad. So that captain of mine was only being honest when he said “if we had a Museum Of Failure that performance would have its own wing.” Then he made me do it again, and again, and again until I had attained mediocrity. At which point he said, “congratulations, you have achieved minimal competence. Now go get better on your own.” And I did. I got a lot better at doing it through Practice. My Failure didn’t lead me to quit, it led me to grow.

The same principle applies to Articulation. Every man starts off with a dumpster-fire worthy of a special exhibit in the Museum Of Failure. If he stops trying, that is where he stays. If he keeps doing it, he gets better at it. Later, we will explain how Failure is an indispensable component of the F3 Leadership Development Process. For now, be assured that with Articulation, it is an absolute must.

Let’s take F3 as example of this premise. F3’s Articulated Purpose is the invigoration of Male Community Leadership. Given the Status Quo of present day America, we recognize that this is a big and radically unique end-state. Male Community Leadership has never been at a lower ebb in our nation than it is right now. We intend to invigorate it through a Visualized series of Waypoints. Each new Workout we Plant is one of those Waypoints.

When we first began Articulating the Purpose of F3 we were not very good at it. Actually, we were horrible. But we kept at it. At this point, we have probably explained it ten-thousand times and ten-thousand times more. This morning, as chance would have it, I explained it to two women, one of whom immediately demanded that I drag her husband to a Workout. I told her that I’d be happy to, and handed her my business card (I’m an attorney) with the F3 Logo and contact information printed on the back. If he calls me, I’ll Articulate it to him all over again. If he doesn’t call me, I might just track him down to do it. The only way I can fail is if I don’t try. And I’m way past that point.

A few years ago, we realized all this verbal Articulating wasn’t enough, so we started writing it all down. Ultimately, what we wrote became Freed To Lead. And, that apparently not being enough, we have written the QSource in a further attempt to Articulate our Vision. Given where we have been, we are not expecting this to be enough either. There will probably be more Articulating to be done and (we hope and expect) we will continue to improve in our doing of it. Frankly, we think we have nowhere to go but up.

So, to every person who has Visualized an Advantage (and we believe that to be literally every person), but has failed to Articulate that Advantage to other people due to the belief that they are not good at it, we say this: go get good at it! Get your Virgin-Q behind you and then continue to improve through Practice.

There is really no other way, not for a person who wants to do what a Leader does.

Articulation is about understanding, not liking

When I was in Special Forces at Fort Bragg I commanded one of the eighteen A-Teams that were in my battalion. One evening, my battalion commander called all of the A-Team commanders together and briefed us on a significant change in our training philosophy. Because we were soldiers, we listened politely, asked a few questions and left the briefing. Then, because we were soldiers, we stood around in the parking lot outside battalion headquarters and bitched about it to each other. All of us being captains of the same rank, that was acceptable.

Because it was dark, we didn’t notice when the battalion commander walked up behind us and started listening to our conversation, the central theme of which was that “only a fool fixes something that isn’t broken”. Finally, one of us saw him standing there and apologized on all our behalf for the bitch session. During the awkward silence that followed, I assumed the colonel would be mad and deliver a pretty solid group-level ass-chewing. But he wasn’t, and he didn’t.

“That’s OK men,” he said instead (and calmly). “It’s a big change and I don’t expect anyone to like it. In fact, it’s not my job to make you like it. It’s my job to make sure you understand it. Does everyone understand it?” After we all said yes, he walked over to his car and drove away. We hadn’t misled him. We did understand him because he had Articulated the change clearly. As he had said, we just didn’t like it.

Years later I realized what an important and liberating lesson I had learned from that colonel–Articulation is about understanding, not liking. Nobody likes to hear about a significant change to their Status Quo because that triggers fear of two things that human nature desperately seeks to avoid: Pain and Chaos. It is the reason that Inertia reigns supreme in the heart of man.

When a Leader Articulates his Vision of Advantage to his Group, and the Movement required to achieve it, he must focus primarily (if not wholly) on ensuring that the Members understand what he is saying and concern himself only secondarily (if at all) on whether they like it. Then he should expect them to complain, and treat their grousing like my colonel treated our bitch session, as the natural reaction of people who are afraid of the Pain and Chaos that comes with change to the Status Quo.

A Leader can’t Influence Movement to Advantage if he doesn’t clearly Articulate what it is by describing his Vision to others. Once they understand it, then he can set about Persuading them to follow him there. 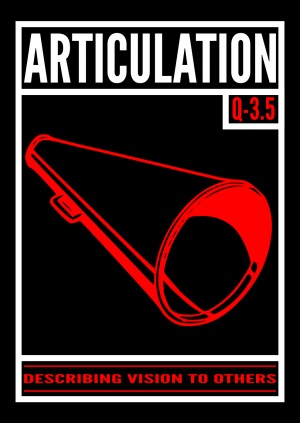