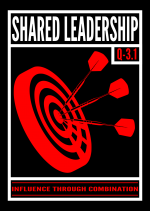 Shared Leadership is a conspiracy to Influence Movement to Advantage

A conspiracy is an agreement between two or more people to act in harmony toward a common end.

If that common end is an illegal activity (bank robbery for example), then the very act of conspiring to commit the crime is a crime itself–separate and apart from actually committing it. To establish a conspiracy to commit bank robbery, the state need only prove the existence of an agreement between the coconspirators and a single action in furtherance of their plot, like the purchase of a gun. The fact that they never manage to rob the bank, or even walk through its doors, does not diminish their guilt for simply conspiring to do so. Likewise, the criminal penalty for conspiracy is very severe, typically only a single level lower than the act itself. Thus, if bank robbery is a class A felony, than conspiracy to commit bank robber is a class B felony.

This may seem draconian given that the intended victim is never actually harmed in the manner intended, but it is considered a just and necessary deterrent to the destructive power of men who combine to act in concerted evil. A four-man crew working together is far more likely to possess the range of skills necessary to rob a bank than four men acting individually. By pooling their efforts, they greatly increase their likelihood of success because each man can focus on the proper performance of his particular role rather than trying to do everything at once. Concerted action toward evil ends is a powerfully Disruptive.

But so is concerted action towards Advantage. Men who combine in furtherance of positive Outcomes are far more likely to achieve their common objective than they would be if they acted alone, because the sum of their individual efforts is greatly exceeded by the product of their concerted action. As with a criminal conspiracy, each man is free to focus on the proper performance of his individual role which (if the conspiracy is well formed) will be within his own D2X. A conspiracy of men working together within their individual High Impact Zones to achieve a specific Advantage will have a dynamic IMPACT on their Community or Organization. Groups seeking Prosperity should encourage men to conspire to Advantage.

For a conspiracy of Shared Leadership to be successful, its Members must be part of a Team–a Proximate combination of two or more people formed to perform a specific Mission for the benefit of a Community, an Organization or both. Only a Team, because it is both Proximate and Purposeful, can provide the requisite organizational basis for Shared Leadership.

A Shared Leadership Team is formed by the Members of a Community or Organization to provide the larger Group with the Virtuous Leadership it needs to Prosper.

Trust is reliance between Team Members. Together with Equipping , Accountibity-TEAM and Missionality-TEAM , it is one of the four necessary components of Team Development .

Without Trust, Teamwork is impossible. Men cannot act in concert without reliance upon one another because they will spend valuable time and energy watching their back instead of focusing on their individual role. The rowers cannot abandon themselves to their oars without faith in their coxswain.

Trust is critical within a Shared Leadership Team (a SLT) because the decisions the Team makes will result in Outcomes that affect the larger Group. The SLT of a Community or Organization is ultimately responsible for the well-being of all its Members. As the proverb goes, for lack of guidance, a nation falls. If the SLT provides poor guidance the Group cannot Prosper. Knowing that, the Members of a SLT must have absolute Trust in each other’s motives and judgment. If they cannot rely on each other, the Group they serve cannot rely upon them.

The universal Essentials for all SLTs are F3’s Leadership Virtues:

Hopefully, not much needs to be said in explanation of why the Leadership Virtues are Essential to every SLT. Just imagine trying to share Leadership with a man who does not tell the Truth, is constantly changing his Standards or is emotionally unstable. It simply cannot be done.

Nor can Leadership be shared with someone who lacks the Virtues that are specific to a particular SLT. Punctuality (while not a universal Essential) would be a specific Habit and Ethic of moral excellence that is Essential to a SLT within an infantry rifle company (for example). An infantry company commander can not share Leadership with a platoon leader who is habitually late or, more precisely, lacks the Habit of always being on time.

As my company commander told me the very first time I was late for something fairly unimportant: “if you cannot be here on time, nothing you do afterward will matter at all.” He was unwavering in his insistence that I never be late–for events both big and small. Habits are regular tendencies that are hard to give up because they become ingrained through Practice. By instilling the Habit of punctuality in me in small things he made sure I would adhere to it in big things, during periods of Chaos when lives were on the line. He helped me do that by graciously telling me the hard Truth and Enforcing a Standard of punctuality that was Essential to our Team’s Mission. In turn, by proving to him that I had adopted that Habit, I made it possible for him to share Leadership with me.

Competence is the ability to Skillfully perform Mission-essential Tasks (the METs) These are the actions that must be done for the Group to accomplish its Mission. As with Virtue, some METs are universal and some are specific. For a SLT, the Leadership Skills of Vision, Articulation, Persuasion and Exhortation are a universal MET.

If a Member of a SLT cannot Competently apply the Leadership Skills, then he cannot Influence Movement to Advantage. As such, it is less that Leadership can’t be shared with him than that there is no point in doing so because he cannot assist in the heavy Task of Leadership that is the Mission of the SLT. He is like a rower without an oar–dead weight.

Nor is a man much use in a SLT if he cannot Competently perform the METs that are specific to the Group that the SLT serves. As with Virtue, these will be directly related to the nature and Mission of Group.

In the case of the infantry, its Mission being to close with and destroy the enemy, the most basic METs are to shoot, move and communicate. My company commander could not have shared Leadership with me if I failed to qualify on the rifle range, was incapable of carrying my rucksack on a ten-mile road march or couldn’t properly communicate on the radio. Although these are not universal Leadership Tasks, they are actions that every infantryman must perform because they are essential to the Mission.

Trust, Shared Virtue and Mutual Competence are the non-negotiable elements that must be present between the Members of a Shared Leadership Team. The Q of the SLT, the Leader who is ultimately responsible for the Outcome, must ensure that it is so. If a SLT Member is lacking in any of the essential elements, then the Q can either try to help the man improve to meet the Standard (as my company commander did with me in terms of punctuality) or (if the man can’t or won’t improve) he has to execute a Black Tahoe and remove him from the SLT.

That determination, to help or remove, is a responsibility that belongs to the Q of the SLT and one that he must discharge for the Group to Prosper. It will generally be one of the most difficult things he has to do as a Leader.

The Shield Lock is the horizontal relationship between men. It is the means by which we fight the Flux, those emotional peaks and valleys that regularly roll through our lives. The Members of a SLT are Pros who get ready for the Flux through Preparedness. Knowing that it will happen, but just not when, they get ready for the expected and stay ready for the unexpected through the development of their Shield Lock.

Leadership has its dark nights of the soul, times when a Leader doubts that he has made the right decision or fears that, despite his best efforts, the Outcome for his Group might be adverse. It is then that the Flux can drag him down into the mire, sap his Hope and leave him Inert, staring fearfully at Obstacles rather than Exhorting his followers to breach them. If dependent upon his Leadership alone, the Group would lose Momentum and start Decelerating toward the Disadvantage that results from Inertia. The Flux will render even the strongest Leader in-Effective if he insists on Leading as a singleton.

Combination is a Leader’s best Guardrail against the Flux because the odds are low that four men Leading together will simultaneously be afflicted by it. If one man is down, the other three will pull him along until he is up again. Knowing this, a Virtuous Leader never tries to Lead alone. He is a Pro, for whom Preparedness is an Essential in everything he does throughout the G3L. He constantly builds and strengthens his SLT through the same principles that guide the development of his Shield Lock. Ultimately, it is from his Shield Lock that he Leads.

This is a radical proposition in a culture that pays lip-service to collaborative leadership in theory but doesn’t reward it in practice. In practice, it is the Steve Jobs and Mike Krzyzewskis who alone wear the garlands of Organizational triumph. We may know (intellectually) that there is a Team behind these men, that their accomplishments are the product of a conspiracy to Advantage, but they alone remain the primary focus of our adulation because solo leadership is a cultural Habit.

To flip that would require more than what most “good” Leaders do from the stage, which is to humbly thank all of the people without whom their success would not be possible. That’s fine, laudable even, but it’s not Shared Leadership. Shared Leadership requires that that there be no stage. Or, if the stage cannot be avoided, that the man in the spotlight on the stage not be the Member of the SLT who bears ultimate responsibility for the Organization’s Outcome.

A mere Effective Leader may not be able to see the Virtue in that kind of anonymity. But a Virtuous Leader, Pro that he is, would see it as a necessary prophylactic against the magnification of the peaks and valleys that public success and failure will have upon his Flux. It dampens the volatility of the undulation.

It is true that success has many fathers, but that failure is an orphan. By Leading from the Shield Lock, the Pro shares both with his Brothers of his SLT–for the benefit of the people who depend upon him. 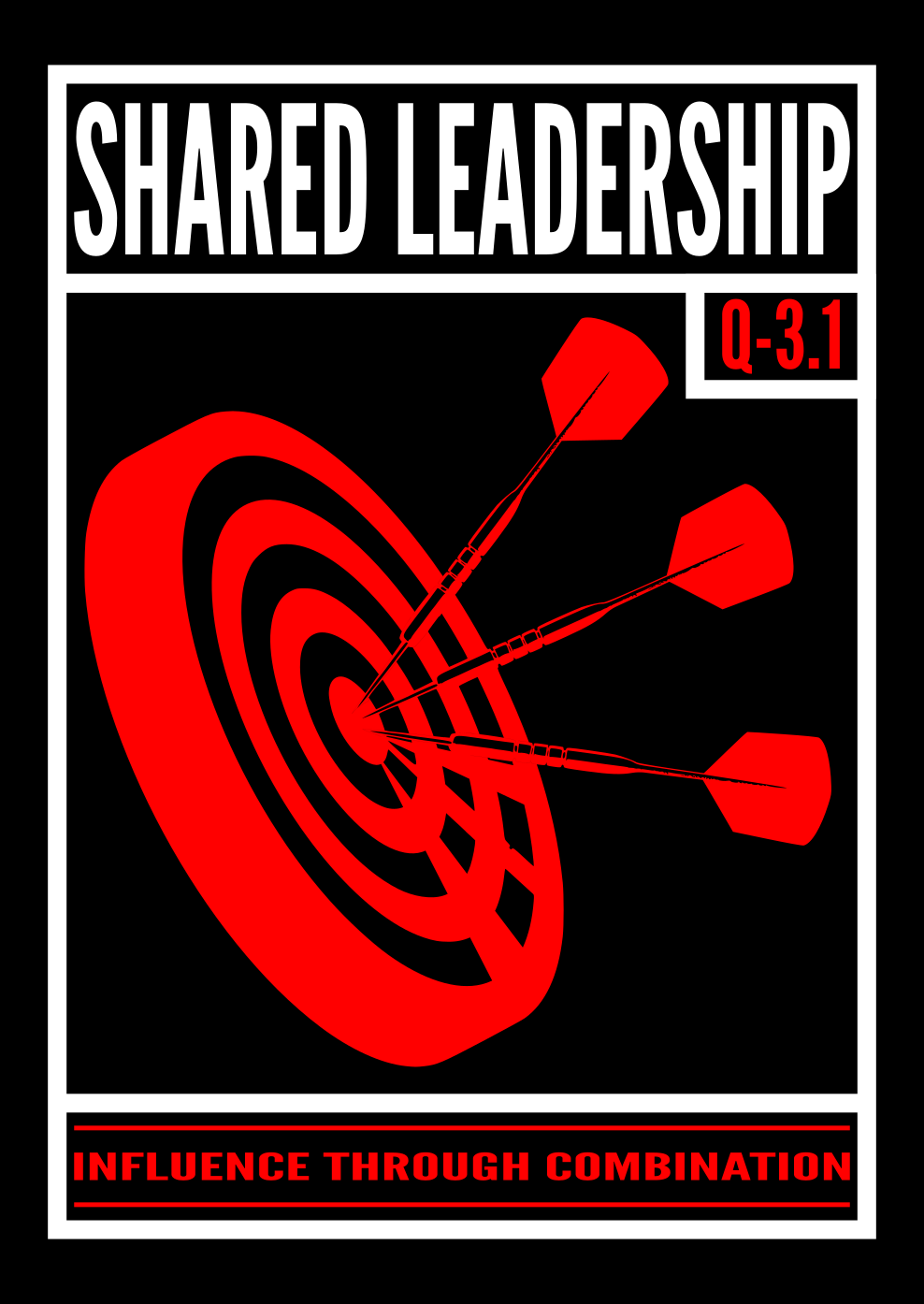 For lack of guidance a nation falls, but victory is won through many advisers.