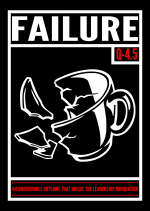 An Undesirable Outcome That Builds The Leadership Foundation

Failure is the crucible of the Leadership Development Process

From Schooling, a man obtains the head-knowledge of what a Leader is supposed to do and be. Through Apprenticeship, he turns this head-knowledge into the heart-knowledge that he will need to Influence Movement to Advantage. Opportunity then provides him with the Practice necessary for him to exert Virtuous Leadership in positions of increasing responsibility and importance to the Groups of which he is a Member.

So where does Failure fit into the Leadership development equation? What does it add to a man’s Leadership Foundation? If he already knows what a Virtuous Leader does and is–and is able is able to do and be those things himself–why must a Leader also Fail?

The reason is that Failure is a crucible. It is the forge by which a Leader is purified through the burning away of his me-first self-regarding nature. It matures him. Without Failure (and lots of it), a Leader will retain too much of who he was and keep doing what he did, rather than being fully transformed into what a Virtuous Leader is and consistently do what a Virtuous Leader does. A man cannot become a Virtuous Leader without the chance to Fail and learn from it. Through Failure he learns how to truly sacrifice and subordinate himself to needs of the Group and its Members. It is Failure that teaches a man to Live Third.

– Finally, when given his Opportunity to Lead, he will put pass praise/take blame into Practice himself, outside of the protective bubble of the Apprenticeship where the Outcome is his sole responsibility

Not until he has failed to properly pass praise/take blame under stress will the developing Leader become an instinctive practitioner of this Leadership Principle. While the first three phases of the LDP may teach him everything he needs to know about pass praise/take blame, only Failure will teach him what he needs to feel about it. And it is the feeling that a man needs to be able to do what is necessary instinctively under the circumstances that it is most needed.

Failure forges the intellectual knowing of what must be done into the tangible instinct of doing of it consistently under periods of extreme stress and limited visibility. For the Virtuous Leader, that is indispensable.

Failure works the best when it stings the most

In my own application of pass praise/take blame I had a good number of Failures before it became instinctive, but there is one occasion that really set the block in place for me. It happened when my boss sent me to a meeting with his boss, the other company commanders and the battalion staff. It was about fifteen men, all of whom had more rank or experience than I did. In an infantry battalion, the battalion commander is like the President and his staff is like the cabinet. In going to that meeting, I was like a wet-behind-the-ears (very) under-under-secretary of the interior.

Ironically, one of the issues raised during the meeting was the performance (or the lack of it really) of my own platoon during a previous training event. The battalion commander asked me why this had happened. In other words, he asked me why my platoon had failed. Even though I was wearing the company commander’s “hat” at the meeting, the substance of the question was directed to me. There was only one acceptable response: my unit failed because I (as the Leader) had failed–followed by what I was doing to fix what I had learned from the experience. If my boss had been there instead of me he would have said that he failed, even though it was my platoon. That is the only correct response under the pass praise/take blame formula. The platoon failed because I failed. No other man is at fault. Here is what we have learned and the corrective action we are implementing so that it will not happen again.

At the time, I knew all about pass praise/take blame from Schooling, so I had the head-knowledge. I had also had ample opportunity to practice it as part of my Apprenticeship. So, I had a good idea of what it looked like when it was done properly. I had even had the Opportunity to do it myself a few times, but never under the kind of stress that I felt at this meeting. So I opened my stupid mouth and this came out: well Sir, we will do better next time if don’t get stuck with the all the battalion’s ash and trash. In other words, in Army-speak, I didn’t have the best soldiers in the battalion so the performance of my platoon was not ideal. I passed the blame to my “faulty” soldiers instead of bearing it upon my faulty shoulders.

In fact, I was not only blaming just my soldiers. I was also blaming the battalion sergeant-major (who was sitting right there at the table with us) for assigning what I saw as problem soldiers to my platoon. Since the assigning of soldiers within the battalion was his job, my platoon failed not because I failed to Lead my men properly, but because my men weren’t good, and the sergeant-major had failed to give me good men. It was his fault and their fault, and not my fault at all. I also need to point out that despite the fact that he had thirty years in the Army and I had less than two, the sergeant-major was still technically my subordinate. He was an NCO (of the highest grade) and I was an officer (of the lowest grade). Therefore, everyone I had blamed for my failure was below me in grade. I had completely passed the blame through to my subordinates in the worst way possible in front of God and everybody. This Failure of mine was truly epic.

From the stunned and utter silence that immediately descended upon the conference room I knew that what I had said was not even close to being the right thing to say. I hadn’t thought about what I said before I said it. I had just spoken impulsively under stress and from the fleshly instinct of my own intuitive desire to avoid blame. The stress of being in that meeting had revealed the true me, an immature and self-oriented neophyte-Leader–not a Virtuous Leader. Not even close.

The battalion commander regarded me impassively for about three seconds, three very long seconds, during which the officers seated to my right and left edged slowly away to avoid any part of the soon-to-be-dismembered me landing accidentally on them. I then became the beneficiary of the worst (and best) ass-chewing I would ever get, right in front of just about every man that mattered to me in my young world at the time.

I can’t remember exactly what that Colonel said (it was over thirty years ago), but it boiled down to this:

“you (as in me) are responsible for everything that happens and fails to happen in your platoon; if your platoon fails it is because you failed and for no other reason; if I ever hear again you pass the blame for your failure to any other man in this battalion I will fire you on the spot and end your misbegotten career right at that moment. Have I (as in him) made myself clear to you (as in me) Lieutenant Redding?”

He didn’t expect an answer, but the answer would have been yes, yes he had. Perfectly clear. And I don’t recall ever making that mistake again. Failure, abject and horrible, had burned pass praise/take blame indelibly into my heart for good. Like a piece of beef jerky, I had been cured.

Oh what a wonderful teacher Failure is, but only if you can take the Pain required to learn from it. And, just as importantly, only if there are men willing to deliver the Pain. Failure only works if the Consequences are allowed to land full-force on the head of the developing Leader who steps on his own crank. The stress must be externally applied and it must fall heavily.

Failure is not terminal within a Lizard

Despite the fact that Failure must sting to work, for it to be useful for the Group it cannot be terminal (unless of course it must be). When I saw my battalion commander a few days after he had hand-delivered me that epic ass-chewing it was as if nothing had happened. He was the same crusty and impossible to please guy he had been before, but I wasn’t in any kind of doghouse with him. He didn’t have a doghouse, just an Organization with Standards it was his job to Enforce and (although I didn’t realize this until far later) he did it because he had to, because the Outcome of my development was his responsibility. It was his job to develop me into a Virtuous Leader. The lives of our soldiers depended on it. He took no Joy (OK, maybe a little, but I deserved it) in dressing me down in that meeting. He did it so that my Failure would mean something to me, so that I would learn from it and develop. But he didn’t make it a terminal event for me, so that the Group would benefit (hopefully) from what I had learned.

Within the Lizard, Failure is not a terminal event. Sure, there are certain Failures that are intolerable because they betray an unacceptable lack of Competence or moral turpitude, something so difficult to Correct that it puts the Organization at risk. But that is (or should be) rare. On the great majority of occasions, Failure is simply a phase of a Lizard’s Leadership Development Process, not its terminating Event.

A Bullfrog is a far different animal. Being a zero-Failure-allowed Group, the Bullfrog has no choice but to ignore a Leader’s progressively worsening Failures until it is forced to recognize (in mock horror) a Failure so foul that it exposes the full fecklessness of the Governance’s mismanagement. Then, out of self-preservation, it throws the Failed Leader (or his unlucky subordinate) under the bus rather than using it as a part of the man’s development process. In such Organizations there is neither room to Fail nor any way to grow from it. That is one reason that Bullfrogs eventually morph into Leeches. Afraid to Fail, the Governance Decelerates into Inert and focuses its energy on Existential Continuity rather than Acceleration.

Because Failure is an essential phase of the LDP an Effective Organization not only allows for it, it courts it. 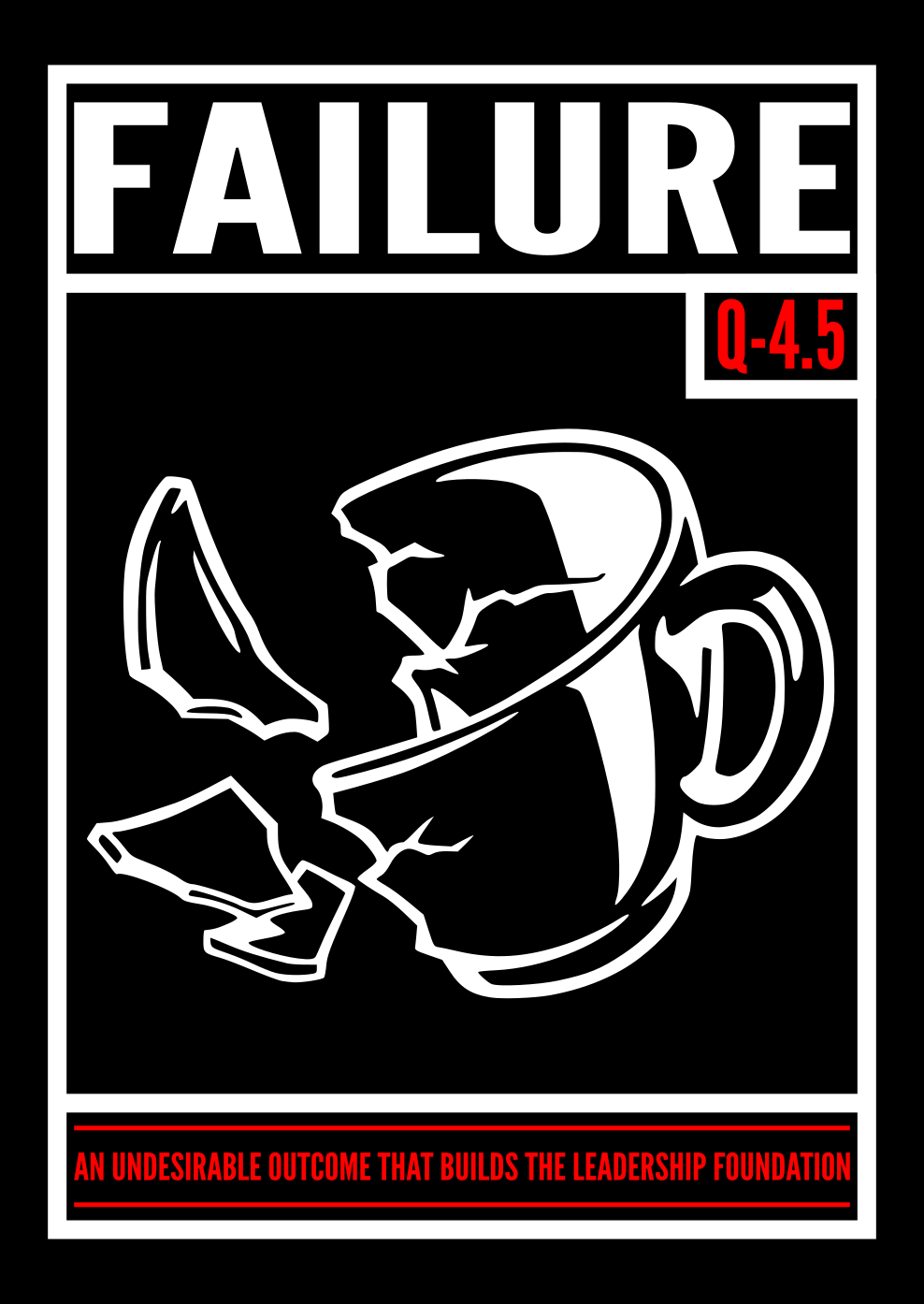