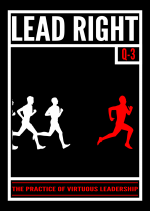 The Practice Of Virtuous Leadership

Leadership is Influencing Movement to Advantage. To do that Effectively, a man must Competently apply the Leadership Skills:

First, he must have Vision, which is the ability to recognize Advantage and the Movement required to achieve it. If he does not know where he is going and why, then he will not be able to Influence anyone else to follow him there.

Second, he must be capable of Articulation, which is the act of describing his Vision to others. People will not abandon their Status Quo for a superior position unless they understand where they are going.

Â Third, he possess the means of Persuasion, which is the initiation of first Movement. Despite their recognition that a Leader’s Vision is Advantageous, human nature is to cling to the Status Quo even it is inferior. Through Persuasion, a Leader convinces people to begin Movement and gain Momentum.

Fourth, because Movement produces uncontrollable circumstances, the Leader knows that Obstacles (Problems that impede Movement) will inevitably arise. An Effective Leader is ready to use Exhortation to incentivize his followers to breach Obstacles and maintain Momentum toward Advantage.

Advantage is a superior circumstance achieved by Movement. For any Group to Prosper it must be in a constant state of Advantage-seeking. If it isn’t, then it is sliding toward Disadvantage, which is an inferior circumstance caused by Inertia . For both men and Groups, Advantage and Disadvantage are binary and antonymic conditions, like peaks and valleys. There is no in-between state, no Static Plateau where stasis can be maintained. Either you are Moving forward toward Advantage or sliding backward to Disadvantage. Either you are Prosperous or you are not.

Goo Nation believes in the non-existent Static Plateau because it is so heavily invested in the cultural myth that people can be protected from the pain and Chaos that accompany Movement and Dynamic action. The Gooist is not wrong that Movement causes pain, and it is true that pain causes un-Happiness (at least in the short run). But he is dead wrong about the Static Plateau. It does not exist and the quest to find it is a futile as the desire to achieve work-life balance. They are both un-Truths that lead to non-Prosperity.

Yet, like many un-Truths erected to shield people from pain and discomfort, it is one that is widely held. As a result, most people truly believe in the myth of the Static Plateau as a safe harbor of Personal Comfort where they can control their circumstances and be free from the short-term un-Happiness that Movement toward Advantage produces. Since Groups are comprised of people, this desire for Personal Comfort is transmitted into a corporate longing. It is what turns a Purposeful Lizard into a bloated Bullfrog focused on nothing more than safety and existential continuity.

That is, absent a Leader who is a Competent Influencer of Movement to Advantage who sees pain and Chaos as the shells that need to be cracked open to get to the nuts that lie within. The Effective Leader knows that Advantage is critical to the Prosperity of the Group and that the Movement required to achieve it will cause some Chaos. He not only accepts that Chaos but also recognizes it as a sign of positive Movement.

An Effective Leader is not necessarily a Virtuous Leader. For that, he must also possess the Leadership Virtues:

First, he must have Candor, which is the Habit of graciously telling the hard truth and demanding to hear it from others. For a Group’s Movement to be truly voluntarily, its Members must know the truth. If their acquiescence is premised upon the chicanery of the Group’s Leader, the Outcome will not be Virtuous even if it is Advantageous.

Second, he must have Commitment, which is unwavering loyalty to the Group and unflinching determination to accomplish its Mission. Effective Leadership alone may achieve short-term results, but it takes a Committed Leader to obtain long-term Advantage for the Group.

Third, he must be Consistent, in that he is unchanging in nature, standard or effect over time. In-Consistent Leaders cannot be fully relied upon and ultimately produce inconsistent results.

Fourth, he must possess Contentment, which is the stability of emotion engendered by the consistent pursuit of Joy rather than happiness. Only a Contented man can abandon the pursuit of his own Personal Comfort.

Fifth, he must be a man with Courage, which is the Habit of setting aside fear to turn hardship into grace. While a Leader may be Effective by pretending that fear does not exist (at least in him), the Virtuous Leader accepts fear as the natural and necessary human emotion that it is and overcomes it through Preparedness and self-control.

In the First Quadrant of the QSource, the Get Right, we addressed man’s pursuit of proper personal alignment through the Acceleration of his relationship with himself, his Concentrica and his Creator. In the Second Quadrant, the Live Right, we explored man’s dedication to Purposefulness through the IMPACT he has by living in Relational Rhythm toward Missionality. Now, in the Third Quadrant, we focus on how to Lead Right, which is the Practice of Virtuous Leadership.

The Quadrants are in sequential order because a man cannot Live Right until he has achieved proper personal alignment through the Get Right. To illustrate this point, picture a man who must row a boat across a swiftly moving river to get to the far bank. If he is not Right his boat will capsize, leaving him clinging to its inverted keel as the current pushes him downstream and away from his objective. Before he can begin making headway, he must flip his boat into the proper upright position.

Likewise, a man cannot begin to Lead Right unless he is first Living Right. Picture the river now full of boats being rowed in circles by men who would benefit from the superior circumstance of gaining the far bank. To Influence them to make headway and Move there together requires the Leadership of a HIM who has both Gotten Right and is Living Right.

Leading Right is the deliberate and disciplined lifetime Practice of both the Leadership Skills (those capabilities that enable a man to do what an Effective Leader does) and the Leadership Virtues (those Habits and Ethics that make him what a Virtuous Leader is). It is not enough that he is Effective–he must also be Virtuous.

This invokes one of the most difficult aspects F3’s Leadership philosophy to understand: the difference between Effective and Virtuous Leadership. This difficulty arises from the cultural tendency to confuse and conflate the Leadership Skills with the Leadership Virtues and view all Leaders from the general perspective of whether they are “good” or “bad”. At best this viewpoint is childish and unhelpful, and at worst it is dangerous. Leaders are neither good or bad, they either are capable of doing what an Effective Leader does (or not), and are either what a Virtuous Leader is (or not). That is the true measure of Leading Right.

Simply put, Effectiveness concerns actions performed, while Virtue is about character possessed. Describing a Leader as Effective is only an observation of his actions–it says nothing of his character. But describing a Leader as Virtuous is an observation that he is both Competent and also guided and restrained by the Habits and Ethics of moral excellence. It is the Virtuous Leader alone who can Lead Right and leave a Legacy by Consistently Influencing his Groups to Move toward Advantage.

While an Effective Leader who lacks Virtue is capable of Influencing Movement to Advantage, he can also (and usually does) Influence Movement to Disadvantage, either through Inertia arising from his in-Consistency or by flawed vision. Because he has neither Gotten Right nor Lives Right, this kind of man is out of the Relational Rhythm required to be Consistent who lacks a Belief System that serves as both moral compass and governor to his application of the power that accumulates in those who successfully Influence Movement.

It is a mistake to dismiss Effective but low-Virtue Leaders as “bad”, as this leads to the minimization of their power to Influence. Because they are Effective but un-Virtuous, the Movement they initiate can produce disastrous circumstances for the Groups they Lead if the Members think in such simplistic terms. Because they lack internal Guardrails, un-Virtuous Leaders must be subjected to powerful external restraint, like the checks and balances written into the United States Constitution.

Likewise, it is a mistake to think of high-Virtue but in-Competent Leaders as “good”. A man may possess some or all of the Leaderships Virtues but still lack the Skills required to be Effective. In fact, it is just this type of person who occupies the Governance of most Groups. Their rise to power is fueled by the assumption that “good” character will translate into “good” Leadership.

Jimmy Carter would be an example of this kind of man. While seemingly in possession of many of the Leadership Virtues, his failed presidency was the direct result of his lack of Leadership Skill. Although he did not Influence Movement to Disadvantage because he lacked the Skill to do so, his Governance resulted in Disadvantage for the United States due to the Inertia engendered by his lack of Competence.

To Lead Right, a person must be capable of applying the Leadership Skills and possess the Leadership Virtues. Anything less will result in disaster, Disadvantage and lack of Prosperity for the Group he Leads.

And David shepherded them with integrity of heart; with skillful hands he led them.