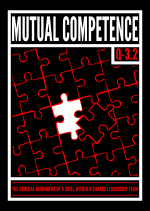 The General Alignment Of Skill Within A Shared Leadership Team

Competence is critical to Group Prosperity

To be Effective, a Group must be in constant motion toward the accomplishment of the underlying Purpose that initially brought its Members into combination. Loss of Momentum transforms Lizard Organizations into Bullfrogs and causes Teams to morph into Clubs. Because Bullfrogs and Clubs are Groups that focus on existential continuity rather than Advantage they are not Effective.

A Group’s Momentum is initiated and maintained by its Mission, which is the designated course of action taken to achieve its Articulated Purpose. A Course Of Action (a COA) is an integrated scheme of Tasks and Events. A Task is an action performed while an Event is something that occurs, whether planned or not. So (for example) baking a wedding cake is a Task, while the wedding reception is an Event.

Successful performance of a Task is based upon individual Skill: a particular ability that requires Practice to Accelerate. A successful Event is the culmination of a series of Tasks executed in concert at a particular time and place. While Tasks require Practice, Events depend on planning and execution. So, the cake will be good if it is Skillfully baked, but the reception will only succeed if the baker delivers it to the right place at the right time.

All Groups have several Tasks that are performed by the Members as part of a COA, both as individuals and in combination with each other. While all these Tasks may be important, only a few of them are Mission-essential, in the sense that they must be Competently performed by the individual Members for the Group to accomplish its collective Mission. The Q of a Team must be able to discern the METs from those that are merely important so that he can prioritize their accomplishment and ensure that they are performed Competently. If he doesn’t, the Group will not accomplish its Mission.

Mutual Competence is an essential element of Shared Leadership

While all Teams have a set of METs that are unique to their Mission, all SLTs share a common MET–the application of the Leadership Skills: Vision, Articulation, Persuasion and Exhortation. The Members of a SLT must be Mutually Competent in their application for it to Effectively perform its Mission of providing Virtuous Leadership to the larger Group. Because it is one of the one of the essential elements of a SLT, it must be present among the Members for them to Effectively conspire to the Advantage of providing Virtuous Leadership to the Group they Serve. Without Mutual Competence, the SLT will be in-Effective.

Mutual Competence does not mean that the Skill level of every Member of the Team must be exactly or precisely equal. That would be impossible, as every Team will always have its Flesh Anchor at the Six and its lead dog at the Twelve . As long as the Skill gap between the Flesh Anchor and the Twelve is not so great that it hinders the Team’s Acceleration, the Members will be generally aligned in Mutual Competence.

It is the Q’s job to constantly Equip the SLT’s Members so that the Skill gap becomes progressively smaller. He always does this by Influencing Acceleration in the Flesh Anchor and never by Deceleration of the Twelve. In fact, within a Dynamic SLT that exhibits a high degree of Teamwork, Acceleration of the Six will be something in which every Member engages as a matter of individual initiative–without the need of direct Influence from the Q. But this will only happen if the Q sets and maintains high Standards within the SLT. If the Q tolerates a Decelerating Flesh Anchor through low or un-Enforced Standards, he will engender bitterness within the Members and that will destroy Teamwork.

Exacerbating the difficulty of Accelerating Mutual Competence is the fact that the Skill gap between the Flesh Anchor and the Twelve is never in stasis. The same man who is the Twelve today may become the Flesh Anchor tomorrow if some of the Team Members change or begin to Accelerate at a faster pace. Likewise, a man might be the Flesh Anchor in one of the Team’s Mission Essential Tasks, while simultaneously being the Twelve in another. Finally, there is the Flux, those undulations in the pace of Movement that are brought on by the unavoidable emotional peaks and valleys that appear throughout the life of every man. Due to the Flux every Twelve has his days as the Flesh Anchor. The Q of the SLT has to take all of that in account to do his job.

Inculcating Mutual Competence within a SLT begins with the Q. He cannot set and maintain high Standards for his Team unless he can meet them himself. This is a basic premise of Leadership by example that is reflected in the F3 admonition don’t Q it if you can’t do it. A Leader must be individually Competent to call his followers forth to Mutual Competence.

On paper, this sounds both obvious and necessary, but in practice it is one of the most difficult challenges a Leader faces. As a man rises through the Leadership ranks of a Group, he will find an ever increasing amounts of this time being taken by things that have little to do with Group’s Missional-essential Tasks. As his responsibilities grow, his opportunities to stay Competent shrink. To ensure that he is able to Skillfully perform his METs, he needs to build Routines that enable him to continually Practice the Skills that made him a Leader in the first place.

Nowhere is this more true than in the military. The higher the rank, the more time spent behind a desk instead of out in the field shooting, moving and communicating. In that environment it would be easy to slide into in-Competence.

When I was a young infantry lieutenant the colonel who commanded my battalion was a powerful Leader. One day, I had my platoon assembling and disassembling the 50 Caliber Machine Gun, which was a MET for us. The colonel was observing this training when one of my sergeants asked him if he wanted to “give it a shot”. I thought it was kind of a wiseass move, given that the man may not have touched a 50 Cal in the twenty years since he had been a young lieutenant. Given the amount of responsibility he had as a battalion commander, he had bigger fish to fry. I hoped he would just laugh it off.

But I was wrong. Without a word, the colonel dropped down next to the sergeant, disassembled the gun and put it back together like he had done it just yesterday. When he was done, he stood back up, told me to “carry on” and walked calmly away. His Competence amazed my men and gave us all great confidence in his Leadership.

Maybe a year later (with that incident long forgotten), I found myself as the battalion duty officer, which meant I had to spend the night at battalion headquarters. Hearing a noise from the colonel’s office, I walked down the hallway to investigate and found him sitting on his floor with the components of a 50 Cal spread around him. Since he spent most of his day pushing paper I couldn’t understand why he was messing around with a machine gun in his office at midnight, but it not being my place to question the commander, I wished him a good night and went back to my desk.

Which is when it hit me. That’s how the colonel was able to “amaze” my platoon the year before. There was nothing amazing about it at all. The man worked at it. He Practiced to remain Competent. The reason he did it at night was that his day was taken up with his other duties, the ones that kept him behind a desk.

Something else occurred to me too, but I couldn’t test my theory until I saw my old sergeant the next day. “Hey,” I asked him, “do you remember that time you asked the colonel if he wanted a turn on the 50 Cal and he blew us all away?”

“Yes sir,” the sergeant answered. “What about it?”

“At the time I thought you might have been messing with him a little. But it’s the opposite isn’t it? You did it because you knew he could do it just like he did it. You did that to give our platoon confidence in the chain of command.”

That sergeant just smiled at me and walked away. That’s how Shared Leadership is supposed to work. 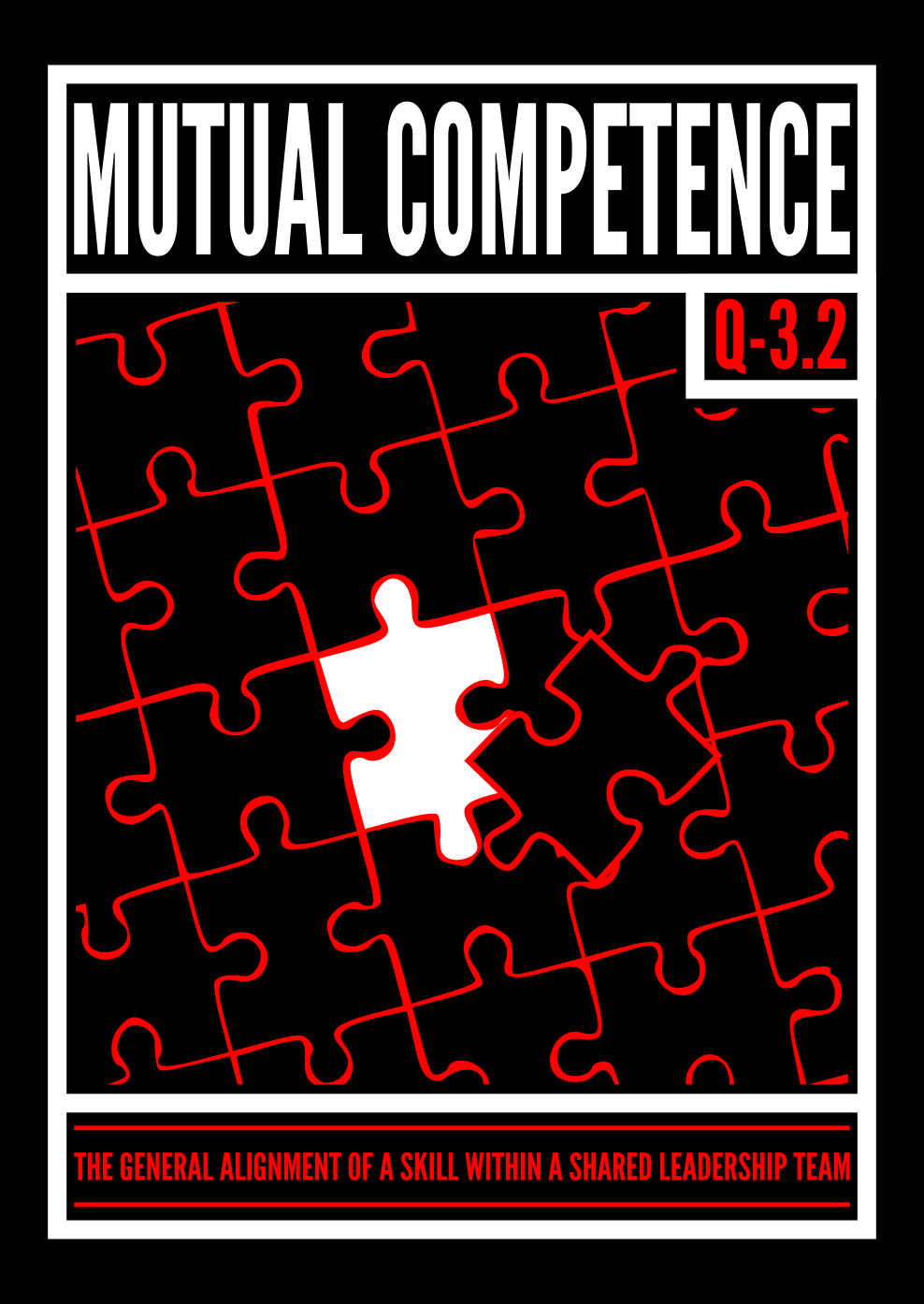 All who are skilled among you are to come and make everything the Lord has commanded.