The HIM preaches what he Practices

An advocate is a public champion of a particular cause or policy. Zealous advocacy is the voicing of full-throated support for that cause even in (especially in) the face of bitter opposition. Zeal requires passion, which is born both of a strong belief and a willingness to personally suffer for it for the benefit of others. A lawyer is ethically obligated to zealously advocate for his client’s rights and position. That means he must continue to do so even where it is personally detrimental. If he can’t do that, then he has to go find another job.

Correction is zealous advocacy for Shared Virtue, which are the standards of moral excellence that are Essential to the Group. These are the individual Habits and Ethics that cannot be compromised. A Group cannot prosper if its Members lack Shared Virtue. Without Correction, it will ultimately wither and die.

Some Virtues are universal, in that they apply to all Groups regardless of their type and Purpose. Honesty is a universal Virtue. The Ethic of honesty and Habit of truthfullnes is just as Advantageous to the Community of Huntersville, North Carolina as it is to the Organization of the FBI. Rampant dishonesty in either Group will lead it to dis-Advantage.

Some Virtues are not universal, in that they related specifically to a Group’s Mission or circumstance. Punctuality is a specific Virtue that is far more important to an infantry platoon than it is to a rock band. While neither Group can prosper without honesty, only the infantry platoon requires its Members to be consistently on time for it to accomplish its Mission.

A HIM’s positive Habits are what he develops through the Get Right. Together with his his Ethics, they reflect and reinforce the Shared Virtues of the Groups of which he is a Member. These are the Essentials, the general and specific Virtues that cannot be compromised without harming the Group. Because there must be unity in the Essentials, the HIM puts them into Practice in his daily life through his Guardrails. For those Essentials that are threatened by his Blind Spots, he seeks Accountability from his Shield Lock to keep him Right.

In this way, the HIM is a Practitioner of Shared Virtues. To Live Right he also must be a Corrector in that he is willing and able to preach what he Practices.

Hypocrisy is the practice of claiming a particular moral Standard to which one’s behavior does not fully conform. Hypocrisy is universal, in that we all succumb to it to one degree or another. For the HIM it is just an Obstacle, a Problem that impedes his Movement which can and must be remedied. In his efforts to do so, the HIM is focused upon behavior conformance, on closing the gap between his Standards and his actions. He does this through the Practice of building better Guardrails and seeking Accountability.

For Goo Nation, hypocrisy is not a mere Problem–it is a dire cultural sin that is second in severity only to judgment. For the Gooist , it is not the gap between a man’s Standards and his actions that is the issue, it is the very existence of the Standards themselves. In the land of Goo, where Happiness reigns supreme, only aspirations are acceptable because Standards lead to un-Happiness. As a result, when faced with the ever-present Problem of hypocrisy, the HIM seeks to better Practice what he preaches while the Gooist adamantly opposes the preaching of what anyone Practices.

Because Goo Nation dominates the culture, its opposition to Standard-bearing is a powerful deterrent to Correction for most men. Even though they may be actively conforming their own behavior to the Habits and Ethics that are Advantageous to their Group, they decline to be a zealous advocate on Virtue’s behalf. This type of man is unwilling to share his convictions even though he is Committed to living them out in his own life. He is a goose too timid to call the gander into account.

To be fair, It takes great Courage to be a Corrector who stands athwart timeless Truths in the face of the ever-shifting tsunami of popular culture. Popular culture is popular because its ideals (as such) capture (if only momentarily) the attention and allegiance of the majority who trail sheepishly behind. The mandarins of Goo Nation know well when to hoist their dampened fingers into the wind of popular culture to discern its sudden shifts so that they can lead the stampede to that newest and greatest thing. Very few men are willing to be left behind in the cultural rush toward universal Happiness, or worse, get trampled by the flashing hooves of progress.

Nobody, that is, but the lonely Corrector. He holds fast against the tide, advocating zealously for Shared Virtue and encouraging resistance to what Goo Nation is doing, saying and demanding that everybody else do and say. That makes him a “regressive” in the Gooist’s eyes, anti-progress, a man who has placed himself on the wrong side of history–an object of mockery.

A HIM does not like being mocked any more than any other man, but he takes it like a man for the benefit of his Group. It is through Courage borne out of his determination to Live Right that he is able to stand up to it. This is not the kind of “courage” that will get him feted as a Kennedy Center honoree. It is the opposite of that. The Corrector’s Courage gets him him branded as a regressive hypocrite.

Preaching what you practice is a culturally thankless job–but one that is absolutely necessary for the ultimate Advantage of the Group.

Truth is a transcendent fundamental or spiritual reality. It is something that exists outside of time and place, unaffected by evolving human notions. Although we may be able to better understand Truth over time, we can never change it. We can only deny it.

From the words of the second paragraph of the Declaration Of Independence it is clear that our nation owes its very existence to our founders’ belief in the fundamental certainty of Truth:

We hold these truths to be self-evident, that all men are created equal, that they are endowed by their Creator with certain unalienable Rights, that among these are Life, Liberty and the Pursuit of Happiness.

Truth is self-evident. You know it because it is what it is. It requires no proof or justification, only acceptance. In this way, Truth is different than Wisdom, which is practical insight with spiritual implications. Unlike Truth, Wisdom is not self-evident. It has to be revealed, either didactically or experientially, but usually (and best) through a process that involves both forms of learning through Positive Habit Transfer.

Correction requires a man to be Candid, meaning that he must graciously tell the hard Truth and demand to hear it from others. Easy Truths, like the sun will come up tomorrow, don’t require much Candor because they are spoken to a welcome ear. But hard Truths, the ones that are likely to instill Shame (if only for a moment), are hard to tell. They are at the heart of Correction, because conformity with hard Truth is what people by nature seek to avoid. It’s why the need for Correction exists in the first place.

But Candor is only half of Correction. A HIM must also be willing to share Wisdom by preaching what he Practices. You can tell a man that a tomato is a fruit. That’s Truth. But that knowledge won’t do him much good unless you also teach him why he shouldn’t use a tomato in a fruit salad. That’s Wisdom.

Fear, while unwelcome, is a necessary mechanism for survival. Without it, we would not have life. Shame is equally necessary, in that it makes the life we preserve through fear worth living. It spurs us on toward Virtuous behavior that is Advantageous to others rather than just ourselves. Without Shame, human beings could not combine together in Groups because it is the glue of Shared Virtue that holds people fast.

Because it views Shame-inducement as bullying, regardless of intent, Correction invites the wrath of Goo Nation. In his demonization of Shame, the Gooist ignores one of the first Virtues that he himself advocates to his own children–generosity.

When a boy refuses to share his toy trucks with his friend who doesn’t have any he is being governed by his natural instinct to look out for himself first. The boy knows that the decision to share his trucks belongs to him alone because the disposition of one’s private property is a form of liberty, and liberty is a self-evident Truth. But the father knows that the boy must also learn the Wisdom of generosity. Because he lacks experience, the boy doesn’t realize that there will be a day soon when it is he who has no toys.

Teaching the boy to temper the Truth of his liberty with the Wisdom of generosity requires Correction. Because it is a vitally important lesson, in that a child who never learns to share will be a very un-Joyful adult, the father not only repeatedly explains the Virtue of generosity to his son, he also uses Shame to Goad him into Practicing it.

Although he would deny it, the Gooist does the same thing when he seeks to pry the truck from his own son’s clutches by telling him that he should be ashamed of himself for playing with two trucks while his friend has none. Adverse to Shame as he claims to be, the Gooist knows that for generosity to become a positive Habit its antithesis, selfishness, must trigger a feeling of Shame in the heart of the son when the father is not there to Goad him. This method of Shame-Goading is vital in the process of Positive Habit Transfer. Without it, Advantageous tendencies cannot be ingrained in others.

Because he is a zealous advocate for Shared Virtue, the HIM engages in Dynamic Shame-Goading with with energetic and vigorous force. But Effective as it is at teaching others to voluntarily do what they should do rather than just instinctively doing what they can do, Dynamic Shame-Goading would be mere bullying if it were not for love. It doesn’t matter if a man speaks of unassailable Truth and invaluable Wisdom, if his intent is to diminish another man rather than build him up he is a bully not a HIM.

For without love, even a man who speaks like an angel is nothing but a banging gong. 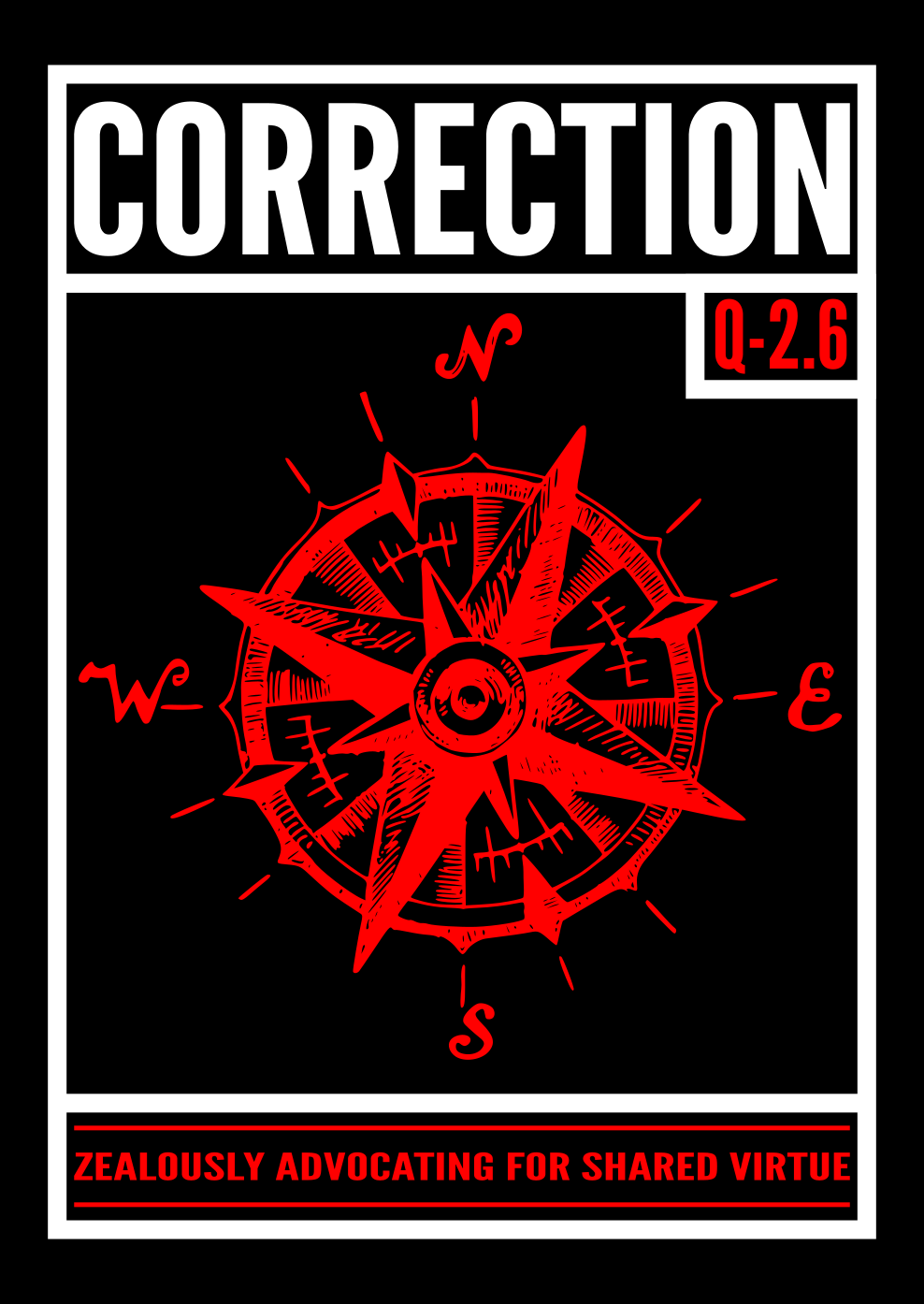 If a brother or sister sins go and point out their fault, just between the two of you. If they listen to you, you have won them over.