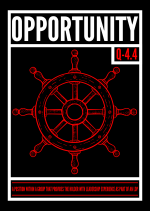 Opportunity is the third phase of the LDP. While Schooling and Apprenticeship are critical building blocks in the Leadership Foundation, no man will ever become the Virtuous Leader he was born to be unless he has the Opportunity to actually Lead. The more Opportunities a Leader has, the better at it he will be, and the more the Groups of which he is a Member will benefit from the Leadership he provides.

Although they are similar, the primary difference between Opportunity and the do-stage of Apprenticeship is responsibility for Outcome. Upon emerging from Apprenticeship to Opportunity a Leader takes on full responsibility for the success or failure of his efforts. He can no longer look to his master, but must now pass on all of the praise and fully shoulder the entirety of the blame.

The success with which a Leader performs in his Opportunities should provide insight into whether he can be depended upon for increasingly important Leadership positions. We say “should” because this is an assessment that many Communities and most Organizations are unwilling or incapable of making properly. Despite the importance of Leadership to Community health and Organizational Effectiveness, the search for Leaders is often conducted without the customary due diligence performed for virtually any other job.

The one question an applicant can count on being asked in any employment interview is “what experience do you have with this kind of thing?” No matter what the actual job is, the interviewer is surely going to inquire into the degree to which the applicant has previously performed the same or similar function elsewhere. All other things being equal, past performance is the best indicator of future outcome. Experience always matters. Except, that is, when the search is for Leaders. In that case, Organizations and Communities consistently disregard a man’s inexperience (often to their detriment), relying instead upon their perception of his character rather than his demonstrated Skill.

It should be the opposite. Any Group that truly understands and values Leadership should insist that its Leaders have multiple and progressive Opportunities to Lead and would be very deliberate about both providing and assessing them. The process would be similar to the development of a pilot’s skills. Pilots first learn to fly on single-engine propellor-driven aircraft. From there (if successful), they move progressively upward to bigger aircraft, dual-props, instrument conditions, jet engines and ultimately (if competent) find themselves behind the yoke of a commercial aircraft with hundreds of passengers.

What passenger would place his life in the hands of a pilot who had skipped over some or all of those progressive steps in his development? No sane person would take that kind of risk with a pilot. But Communities and Organizations take it all the time with Leaders. Without passing any judgment on how he ultimately performed, there is little dispute that the forty-fourth President of the United States was elected despite having virtually no demonstrable Leadership experience of any kind. There could hardly be a bigger (and more challenging) Opportunity than chief executive of the United States of America, and yet that Community placed itself in the hands of a pilot who had never flown before.

How could that have happened? Here are the three reasons, which apply to any Group that hires Leaders:

1. Demand Exceeds Supply. The demand for Leaders so exceeds the available supply that Groups are forced to abandon experience as a screening criteria. When it comes to Leadership, Organizations are beggars who cannot really afford to be choosers.

2. Leadership Experience Is Too Rare To Matter. Since most people don’t have any Leadership experience there is no real point in asking about it. In other words, where all applicants are equally inexperienced, experience devolves into an irrelevant comparative criteria.

3. Ignorance Abounds. Most Groups don’t know how to look for Leadership experience because they don’t really know what a Leader is and does. In contrast, if an airline is looking for a pilot, it can ask an applicant how many hours he has in the cockpit of a particular aircraft. If a church is seeking a pastor, it can ask an applicant how many sermons he has given. But when an Organization needs a Leader, it doesn’t ask such specific questions to determine an applicant’s experience because the people asking the questions don’t know what to ask. As a result, airlines and churches, being Organizations that need Leaders just as much as they need pilots and pastors, just end up relying on those same pilots and pastors for Leadership as well, with predictably mixed results.

The best players do not always make the best coaches

Leadership Opportunities are easy to find within a Lizard. The culture of such an Organization makes experience an indispensable criteria for Governance. The most obvious example is the military.

My service was in the Army, but I saw enough of the other services to believe it equally true across the board. In the military, the Governance is appointed by a selection process that is largely dependent upon demonstrated Leadership performance in a man’s prior Opportunities.

In between each of those Leadership positions an NCO will likely have staff jobs that are more administrative in nature, but even there his Leadership Skills and Virtue are evaluated. An NCO’s career is spent in one successive Opportunity after another, during which his capability to shoulder increasing responsibility is evaluated, honed and developed. Based on the results of that development he is selected for increased responsibility. He is systematically given bigger planes to pilot.

The Opportunities for commissioned officers proceeds along a parallel course. In my nine years in the Army, two were spent in Schooling of some kind and the remaining seven were spread across six very different Opportunities. My performance in each of those Opportunities was evaluated annually in writing by both my boss and his boss.

Among the things that the Army required my bosses to evaluate were these eight specific character traits that are inherent to Leadership:

For each of my six Opportunities I received a written evaluation report (called an OER) that addressed these Leadership characteristics. I still have all of my OERs in a loose-leaf notebook with the title The Good, The Bad and The Ugly written on the spine. I wrote that there 30 years ago because what I was reading in my OERs about myself was sometimes good, sometimes bad and often ugly, just like my performance as a Leader was. Just as it is now.

Rereading my OERs as I write this QPoint I can see how the younger version of me was having his Leadership Foundation constructed by the Organization in which I was a Member and Leader. It also reminds me of the Pain involved in doing so. There were times when I questioned whether I had any of the eight characteristics in sufficient quantity to have been entrusted with the invaluable lives of young soldiers and the (merely) very valuable equipment that our nation purchased for our use in its defense.

At 22 years old I was a platoon leader with 24 men and $2MM worth of gear. At 54 (as I write this), I am older than every man in my entire battalion was at the time and wonder if I had any business with that much responsibility at that age. On the other hand, I was not trying to do it alone. I was part of a Lizard whose Leaders were watching over me and my development. And that Organization was nothing if not Effective.

After my first Leadership position as a platoon leader, I had five more Opportunities, each with progressively more responsibility and complexity. Each job was very different but the evaluative criteria the Organization applied to my performance never changed. The same OER form was used by my boss and my boss’ boss regardless of the nature of the job I was doing.

Interestingly, the OER form does not provide a place to assess any of the actual skills associated with being a soldier. Thus, there is no block to grade how accurately I could shoot my rifle, how far I could throw a grenade or how far and fast I could march with a rucksack on my back. How could that be?

The reason is that the Army assumes its Leaders will be Competent in soldiering skills, while it promotes its Leaders on the basis of their Leadership Skills and Virtue. Almost every other Organization does the opposite. Promotion to Governance within most Organizations is usually based upon perceived character or demonstrated Competence within the skill set inherent to the Organization’s Articulated Purpose. So, the president of the Cordwainer Guild will likely be the guy who has an even temperament and makes the most shoes. There is some logic in that, but it does not fully follow that a man who is good at making shoes will be good at Leading an Organization of shoemakers. Making shoes and Leading shoemakers are two different skill sets, like playing basketball and coaching it.

Because the best players do not always make the best coaches, a Lizard separates its evaluation on Leadership Skills from its assessment on the Skills that are inherent to its Mission.

The Virtuous Leader encourages other men to Lead early and often

One of the Leadership Principles I was taught in my LDP was that Opportunities should be provided early and often. Like any Skill, the more reps you get the faster you will develop. Moreover, there is no perfect time to start Leading and no good reason to wait. As a result, I often found myself encouraged into positions for which I wasn’t quite sure I was ready. Every new Opportunity I received felt like a stretch for me. Without being pushed by more experienced men, I might have shied away to avoid Failure. The willingness to Lead early and often was an important lesson in my development.

Later, when I was compelled by circumstance to Collision Learn the Skill of litigation, that lesson was invaluable. Just as with Leadership, every new experience I encountered as a trial lawyer felt like a stretch for which I was not quite ready. And, because I had no one to push me I might have shied away. But, because I had learned from my LDP that stretching is how you grow the fastest, I was able to push myself. I knew that the Pain and Chaos of a new courtroom situation would be both a great teacher and increase my Durability. So I welcomed it. I also knew from my LDP that I while I was more likely than not to succeed if I gave it my all, even if I failed the world would not stop turning. I’m just not that important.

Now, whether I am developing new lawyers in my own firm or new Leaders in F3, I encourage them to Lead early and often. This is a critical step in the growth of a Sua Sponte Leader. A man cannot embrace taking charge in the absence of direct authority until he learns to accept the Opportunities with which he is presented–regardless of whether he feels fully prepared. If he shies away, he might miss out on an important step of his development into a Virtuous Leader. Because I am a Virtuous Leader, it is my responsibility to see otherwise.

In order to Leave Right, the Virtuous Leader encourages other men to Lead early and often. 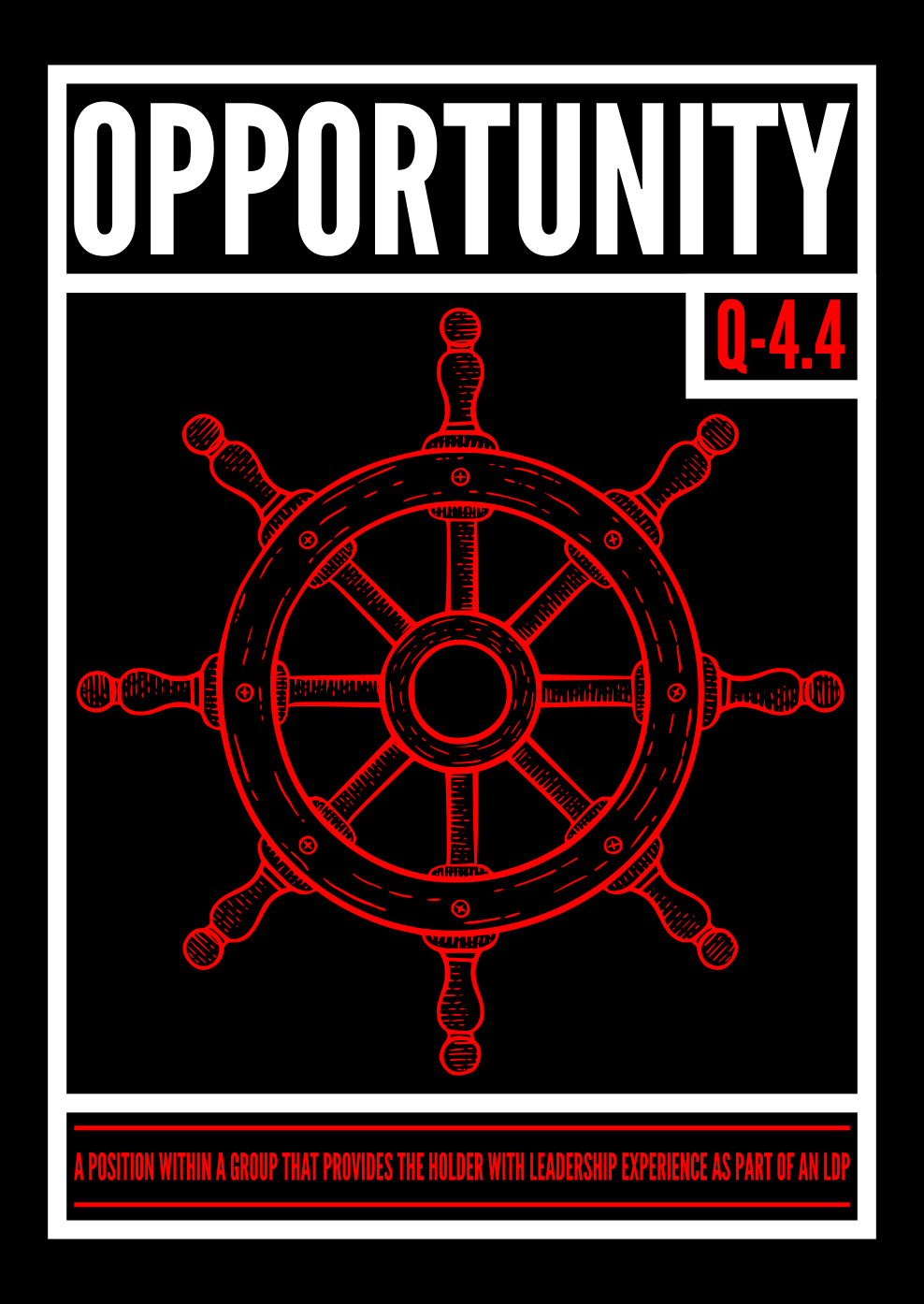 If anyone does not know how to manage his own family, how can he take care of God’s church?