For Suburban Texas Men, a Workout Craze With a Side of Faith

In Katy, outside Houston, many men have taken up F3, a no-frills fitness group where members push themselves physically but also bond emotionally. 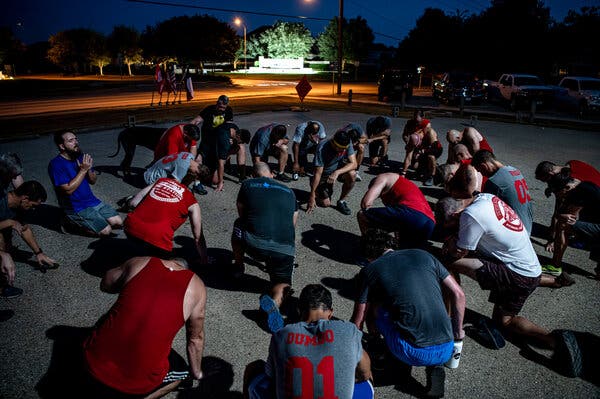 About 30 men praying together after an F3 workout at Katy City Park in Katy, Texas. Although F3 is ostensibly nonsectarian, many groups have a Christian emphasis.

KATY, Texas — By day, Glenn Ayala is a 50-something account manager who spends much of his time behind a desk. But at Rick Rice Park in the early morning darkness, doing push-ups and jogging with a 20-pound rucksack on his back, he is known as K9, and he is with his people.

One Friday in August, Mr. Ayala joined about 20 other men in what they called the predawn “gloom” for the group’s regular workout. They grunted and hooted un-self-consciously, razzing one another and shouting encouragements, using nicknames generated by the group. (Mr. Ayala got his because he trains dogs in his spare time.)

The members also often gather to pray together and talk, building friendships that have extended into their daily lives: When Mr. Ayala separated from his wife, members of the group helped him move. When his relationship with his adult son floundered, they texted him Garth Brooks songs to buoy him. 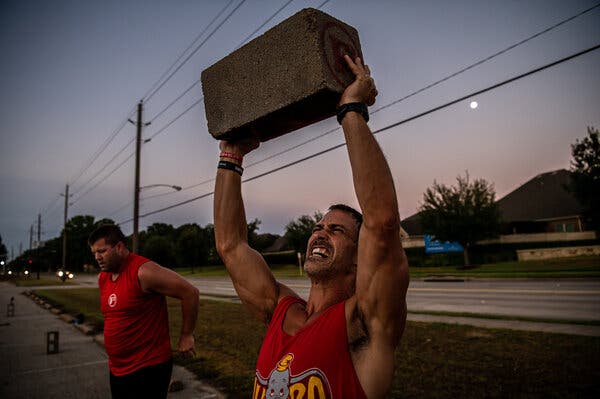 F3 stands for fitness, fellowship and faith and is a fast-growing network of men’s workouts that combine exercise with spiritually inflected camaraderie. 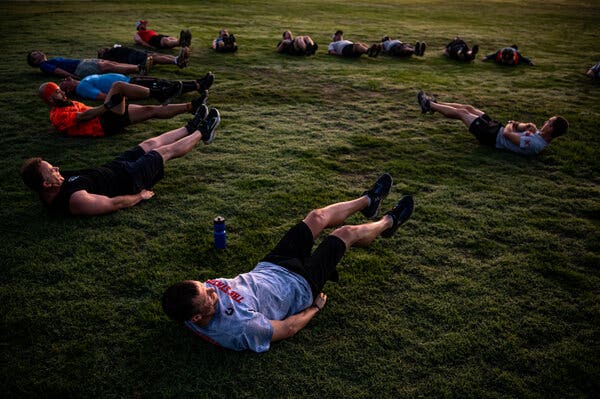 In Katy, Texas, just west of Houston, the F3 model has thrived. 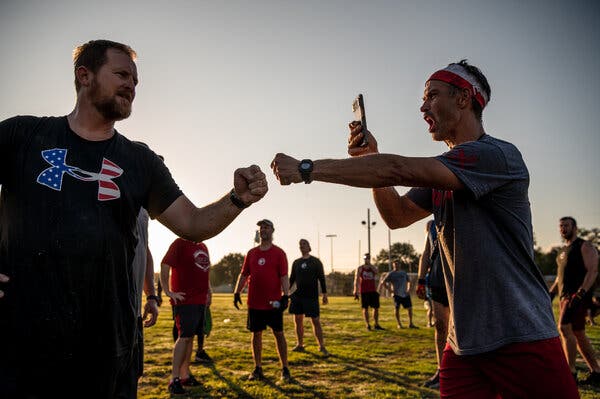 Founded in 2011 as a free, outdoor group workout, F3 exploded in popularity during the pandemic, expanding to some 3,400 groups across the country from 1,900.

This is F3 — that’s fitness, fellowship and faith — a fast-growing network of men’s workouts that combine exercise with spiritually inflected camaraderie. After its founding in 2011 as a free, outdoor group workout, its popularity exploded during the pandemic, expanding to some 3,400 groups across the country from 1,900, aiming to solve, as John Lambert, a.k.a. Slaughter, the network’s chief executive, put it, “a problem that society at large and men definitely didn’t even know they had: middle-age male loneliness.”

In Katy, a booming upper-middle-class suburb just west of Houston bursting with office parks, new housing developments and the most expensive high school stadium in the nation, the F3 model has thrived. The former railroad town now has 18 workout locations, compared with four in Houston proper.

I first heard about F3 through a few acquaintances in Texas, men who spoke about their local groups with the zeal of evangelists. It reminded me of how urban women would talk about SoulCycle in the early 2000s, only these guys were suburban fathers.

Its no-frills formula inspires fervent devotion. “F3 has changed my life,” Mr. Ayala said. He first attended last year, when a friend repeatedly nudged him to try it — or in F3’s baroque jargon, put him in an “emotional headlock.” He was hooked immediately. About a year ago, he got an F3 tattoo on his chest. 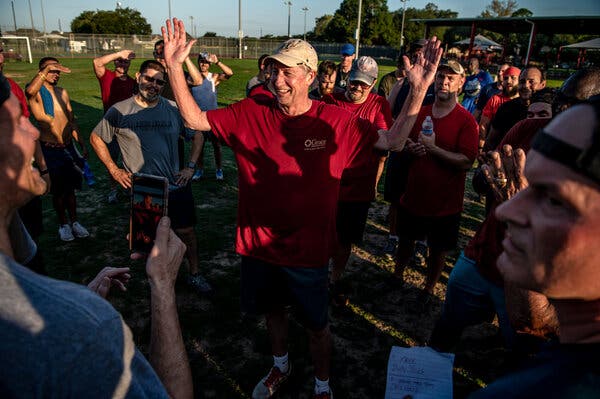 Dusty Thiele, the mayor of Katy, Texas, laughing as men shout out potential nicknames during the customary naming — held after someone completes his first F3 workout. 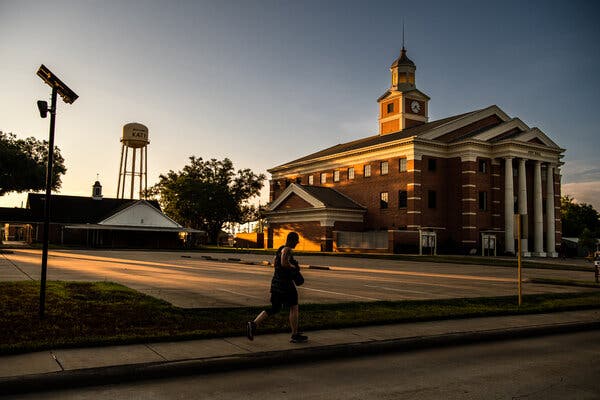 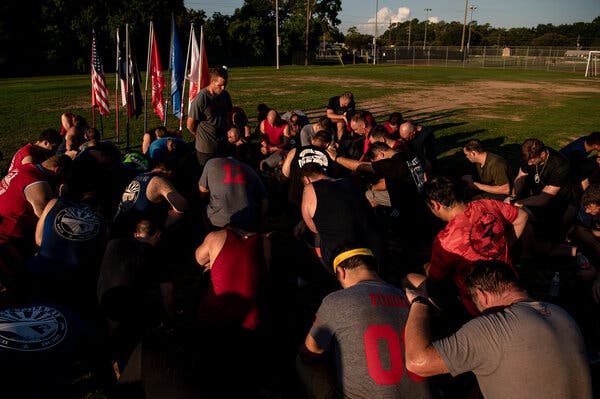 The straightforward approach of the workouts and fellowship has drawn a fervent following.

A few miles away from Mr. Ayala’s regular workout location, about 30 men had assembled in the middle of a summer heat wave for an F3 workout at Katy City Park. It was 5:15 a.m. and already 80 degrees.

The men jogged to a soccer field for the meat of the workout, a paired exercise where one partner sprinted across the field and back while the other lifted a cinder-block like a weight; when the sprinter returned, they switched, with the team goal of counting up to a collective 200 lifts. Occasional shouts punctuated the heavy breathing: “Be a man!” and “Let’s go, Double Play, you freakin’ stud!”

In F3, there are no facilities, no formal gear and no membership fees. Popular in the South, where outdoor workouts are pleasant most months of the year, the groups are ostensibly nonsectarian, in the style of Alcoholics Anonymous, though many have a Christian emphasis. Some men describe the group as complementing and expanding on their experiences in church.

F3 is also the rare setting devoted to male bonding. It means you “have guys to do life with,” said Pastor Giraud a.k.a. Baby Shark, who works out with Mr. Ayala. “To really care for others and be cared for, to acknowledge others and be acknowledged.”

The F3 ethos “embraces healthy male masculinity,” said Kevin Weaver a.k.a. Camo, who started F3 in Katy in 2017. “It’s OK to be to be masculine and to embrace that side of yourself as long as it’s channeled in a healthy way with love and for positive effect.” 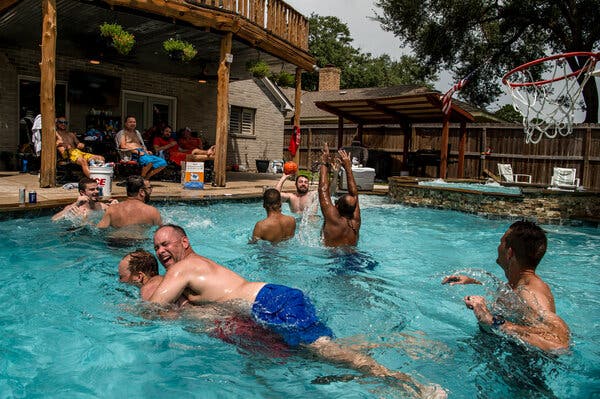 One F3 group celebrated its one-year anniversary with a pool party. 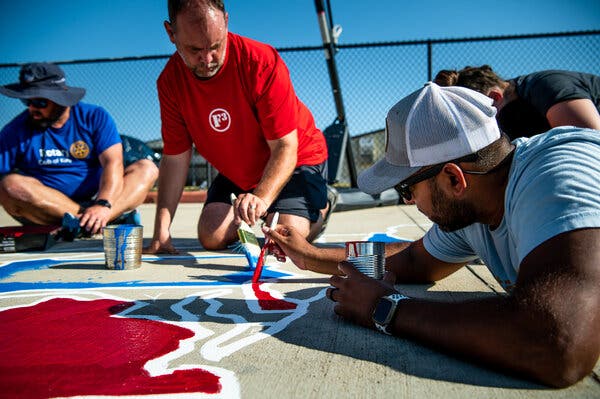 After an early morning workout together, some F3 members volunteered with the Rotary Club of Katy, working on a painting of the United States at a local school. 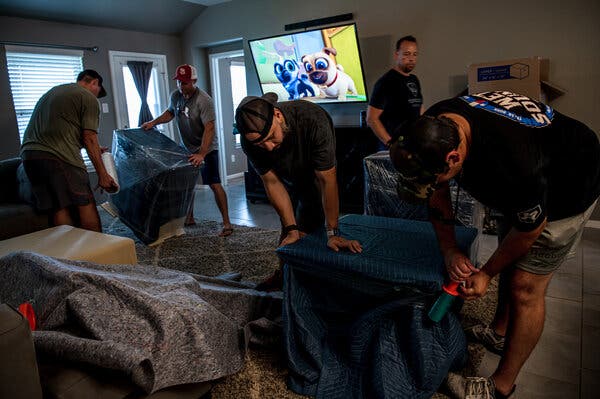 Men from a group helping a fellow member move.

Mr. Weaver, 42, played football in high school. But after college, marriage and children, it was hard to find time to work out, and even harder to make and maintain deep friendships. It was a “long season of acquaintances,” he said.

When a friend invited him to an F3 workout, he was put off by the impenetrable jargon he saw online, where insiders may use sentences like “At the COT, the Q gives the FNG his F3 Name in front of the PAX.” (Roughly: At the end of the workout, the leader gives the first-time attendee his nickname in front of the group.) Mr. Weaver teased his friend about “your workout cult.”

Now he jokes that “you can’t spell ‘culture’ without ‘cult.’”

Clay Folloder, a.k.a. Happy Meal, had been working out with Mr. Weaver’s group for just a few months when his father died by suicide. He messaged the group for support.

“You think you’re alone, but we’re all dealing with the same things,” Mr. Folloder said.

Many F3 men want to be traditionally strong providers, but also be more active and attentive in their family lives than their own fathers were. 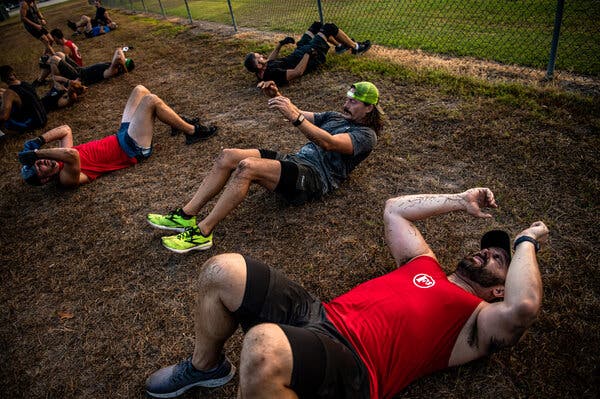 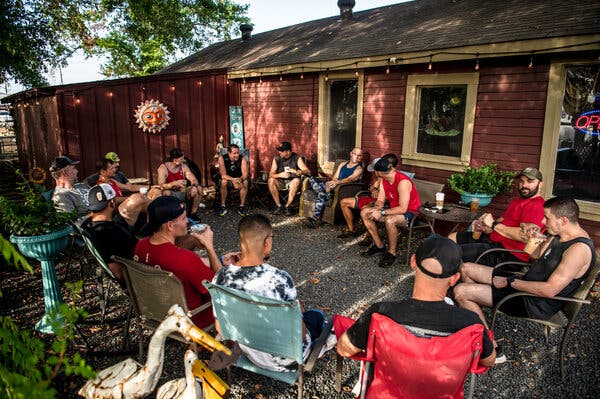 The gatherings after the workouts help build friendships that have extended into members’ daily lives.

On Fridays, Mr. Ayala’s group ends its workout with members talking about their lives for 30 minutes, led by Todd Pendergrass, a.k.a. Papa John, an executive pastor at Kingsland Baptist Church in Katy.

On that muggy morning in August, one man said he had been laid off recently; he happened to be with Mr. Weaver when he got the call, he said, and he was able to stay calm. A man in his 20s said he was thankful for the older men in the group who he could look to for help navigating marriage and fatherhood. As the conversation progressed, there were back slaps and heavy nods.

Mr. Ayala was among the dozen or so men who milled around after the circle broke up, having one more cup of coffee before dispersing to their jobs as engineers and fund-raisers and insurance agents.

“I’m not the same person I was when I started,” Mr. Ayala said. “I’m not where I want to be, but I would definitely say I’m a better version of myself.”

The gloom had lifted, and the sun was rising over the park.

Ruth Graham is a Dallas-based national correspondent covering religion, faith and values. She previously reported on religion for Slate. @publicroad