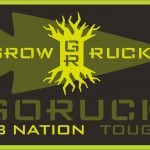 I was asked recently, what could I say to someone who is sitting on the fence when considering whether or not to sign up for GrowRuck. Why should we GrowRuck? was the question asked of me. My first thought was to reply with something that sounded like, “If you are afraid of doing something equally tough and totally rewarding, don’t sign up.” Participating in GrowRuck is only possible by making the first click on the GrowRuck 15 Georgia Pre-blast or theÂ  GrowRuck 16 Naperville Pre-BlastÂ and that is a decision you will have to make. It’s like deciding to take what Dredd calls the DRP (Daily Red Pill). You have to make a choice to take the difficult path knowing that the rewards lead to something better. If you are curious about what GrowRuck looks like, the Pre-Blast link contains a ton of information for you (the weekend schedule, gear, what GORUCK is all about, how to train, etc). Taking the first click is all it requires and here’s a preview about what’s available when you make the first click.

I’ve been a Boy Scout all my life, from being a Cub Scout through an Eagle and on to Vigil Honor in the Order of the Arrow. One thing I learned about life was that “prior experience is the best predictor of future success.” It’s a lesson shared by many HR firms when we are looking for the best people to hire for a job. GrowRuck gives the leaders of F3 an opportunity to push and challenge ourselves through a challenging experience, so when the time comes to actually apply the leadership principles, we are ready and confident to do so.

GrowRuck is hard. GrowRuck is challenging. In fact, I might even recommend that you don’t sign up. I want to be clear about that, it’s like a regular F3 disclaimer. GrowRuck is not a challenge to enter into lightly, but as a member of F3, that does not frighten us. Instead it invigorates us. Knowing that the Cadre will push you past what you could ever do as an individual, is why we even enter into a CSAUP. It is, by the way, Completely Stupid And Utterly Pointless to walk around all night in the dark with some guys you have never met before from up and down the South or Midwest carrying a 30 lb plate or 6 bricks in a ruck. That’s before the Cadre finds an 800 lb log that drifted on the shore of some waterway and before he sets time hacks and challenges that continue to push yourself further than you could go as an individual …AND… that is why we GrowRuck as a team.

The GORUCK challenge is billed as the ultimate team building event. Because none of us could individually do what was asked of us during GrowRuck. We have to act as a team and I can tell you that the bonds of brotherhood formed during a GrowRuck, will remain strong the rest of your life, esp during a time of chaos and natural disaster. Â

This lesson came true to me after GrowRuck 03 in New Orleans. We had a band of hairy Texans from Houston who made the 5+ hr trip in a huge van to lunge down Bourbon St at 0200 during the middle of Gay Pride Week. Needless to say, the stories we shared will stay in N’awlins and formed close bonds. What it meant was that when the flood hit Houston a few months later, trust and connection already existed. I knew who to call and what to share with them because 12 months earlier, we went through our own 500 year flood in Eastern NC. We shared the lessons we learned from the pax of Columbia, SC when they shared what they learned during their flood 12 months before our flood. You see, no band of brothers would ever be prepared for a flood of that magnitude, AND they were still ready for whatever God had in store for them. When you are challenged as a team the way you are challenged at a GrowRuck, no obstacle seems too large. You are prepared for expected and stay prepared for the unexpected after completing a GrowRuck.

You see my brothers, you don’t sign up for a GrowRuck just to carry heavy stuff around for 12+ hours through the dark and gloomy waters of the gloom. You will do that, but that’s not why you GrowRuck. Instead, you GrowRuck in order to know that you have brothers, from around the region who will be there for you, because they were already there for you during the GrowRuck. You know they know how to lead. You were vulnerable as a leader in front of them. You learned lessons. You carried their burdens. You talked to them. You learned some crazy Pink Floyd lyrics together because Dredd asked you. You learned their name and will always remember why they were calledÂ  Dreamliner, FIAB, Jingle Vader, or Hug It Out.