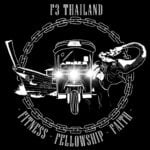 Italian Job recently discussed F3 Thailand with Cookies. Learn more about the ups, downs, and how we can support his efforts in Chiang Mai, Thailand.

C: A little over two years ago, I was really struggling for community and trying to find some male accountability. I was talking with a friend of mine (Da Vinci – F3 Wheaton) about connecting and he said that unfortunately he really didn’t have any margin in his life to get together regularly. However, if I was interested there was this workout group thing that he did in the mornings and maybe I would be interested.

My first post was not particularly memorable, I showed up one September morning followed along with what everyone else was doing, but I really didn’t understand what was happening until we got to COT. It was an overall good experience though I can’t really put my finger on the exact reason I kept coming back. I think I felt something worth encountering, something I hadn’t experienced before with a group of men.

To add to the overall learning curve, it was IronPAX month and F3 Wheaton had layered something called “ShredTember” on top of that. So it took me a few weeks to really understand what was going on. The hook was finally set when I saw how the PAX rallied around a brother in need later that fall. That’s when I knew that this was the camaraderie I needed in my life.

From there my journey was fairly typical, I got crazy motivated to participate in any challenge put forward. The goal I identified pretty quickly was to have the most stenciled coupon in the region, which I achieved partly through foolish perseverance, but also through getting lucky that I didn’t break my coupon before the competition broke theirs. I also set my sights on winning the ShredTember competition the next year, so I posted to every workout available in the region the month of my Manniversary (except for a couple of days of travel) to clinch that.

IJ: How did you get your name?

C: My last name is Tehan with a silent H so teaching people to say it properly has always been a challenge. When introducing myself I would often say “Daniel Tehan, like ‘Tea ’n Cookies,’” which made complete sense to the internationally diverse community I grew up in. But on that gloomy morning the phrase fell completely flat and most of the PAX thought I was talking about a brand of cookies they didn’t know about. I was spared all of the questions about embarrassing stories or anything like that. “Cookies” it was.

IJ: Tell us about F3 Thailand

C: F3 Thailand is just getting started. I am the only one with F3 experience from the homeland, so it has been a great experience starting to build the culture of the group from the ground up. We currently have seven regular PAX (including my 13-year old 2.0 who posts about once a week). We are currently in Chiang Mai, the second largest city in the country. We work out four times a week at two different AOs. Right now, YHC is Qing most workouts but the PAX are starting to step up and lead as well.

IJ: When and how did it start?

C: It was through the leadership, encouragement, prayers, and even some regular financial support for our ministry from PAX in F3 Wheaton, F3 Dayton, and F3 Spacecoast that made it possible. Cookies is just the messenger. There are a lot of things we have had to adapt and I really appreciate the advice of these HIMS, and F3 Dayton pulled together and sent us a box of nice work gloves, which are really hard to find here. Imagine living somewhere that doesn’t have F3 established. I couldn’t NOT start a region here. The trick was really finding out where there were PAX who would be willing to grind out building a new region with me. It’s one thing to join a group of 10 and be asked to lead shortly thereafter, it is another thing to join a group of one and be an anchor for a new group (huge shout out to Archive and Captain Crunch who spent many months as the two starting F3 Wheaton before I knew about it). Through some social media connections, I found Old Faithful and we tested out a two times a week cadence at a municipal athletic field near his house. This worked well through the summer and in September, we decided to do an official launch. A social media push brought another PAX out of the woodwork down south, but also three more very interested on the North side of town. Since I live in the middle of town I figured I could drive the 20-30 minutes each way to help both groups get established.

IJ: How many PAX do you have?

C: Six adults and my older 2.0 are regulars. We have had three other FNGs come who were traveling here for short trips. I imagine they will be back.

IJ: Where do you work out?

C: I live in the center of the city and the PAX live mostly North and South of the city, so I drive to both AOs. My hope is that they become well enough attended and established that I can look to establish an AO in the city as well as on the West side. One AO is a municipal athletic field (soccer, running track, unfortunately no hills), the other is a local university. One nice thing for now is that they are very similar to each other so I can re-use workout plans at both locations without having to adapt too much. This is really helpful since I am Qing at least 3 days a week.

IJ: What Thai names do you have for some exercises? Burpees? Merkins? Side straddle hops?

C: Not many yet. I anticipate quite a few of the animal movements will start to be called using their Thai names. “Ling” is monkey, I haven’t asked anyone what is the least rude translation of “Humper” yet. Instead of standard CMU coupons we use other things. One of my favorite are large red bricks (about 12lbs), we call them BOGOs.

C: There have been a few equipment challenges, but “modify as necessary” has pretty much covered that. Probably the biggest challenge is trying to reach the Thai community. So far we are a bunch of foreigners working out in the mornings that the Thai folks point and smile at. We have been asking a lot of folks about how to invite Thais to join, and that seems to be a common difficulty with this type of thing. I am hoping to get some more traction at schools and universities (particularly the one where we are already working out) to bridge the gap. If there are a few Thai men in our group that will invite their friends then we can improve our diversity a lot.

C: So far, I haven’t had the margin to do much EHing. In the next few months we will be discussing an SLT instead of a “King Cookies,” so that will make a difference. These are great men and they are all quite busy with their lives, so we are moving forward slowly.

C: 1: Pray for us. If you think the Sad Clown epidemic is bad in the US you should see it here. There are even fewer HIMs as role models to young men and there have been generations of broken homes. We need wisdom in how to engage the community.

2: Buy shirts. We have our logo finished and just need to get a pre-order put together. Remind yourselves to pray for Thailand in the Gloom.

3: If you or anyone you know is coming this way, reach out to us and let us know you are coming. Any infusion of culture from the mothership will bolster these men. Also, if you can carry some F3 merchandise (Q source books, F3 flags, Patches, Shirts, etc.) with you when you come, that’s helpful too (shipping is pretty ridiculous to send stuff here, so if we can order and ship to someone in the US to hand carry over it saves a lot of money). 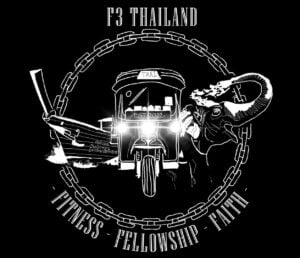 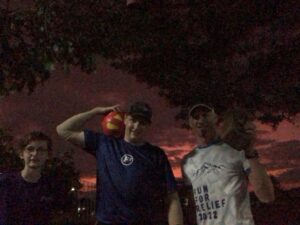