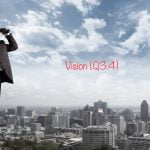 Recognizing Advantage And The Movement Required To Achieve It

Through Vision, the Effective Leader charts his Group’s pathway forward

Through his Vision, the Effective Leader can see the Waypoints that form the pathway to the accomplishing the Group’s Articulated Purpose. He can see the way forward for the Group.

Some Visions are bigger than others

Because Visualization is inherent in Leadership, describing a man as a “visionary leader” is like saying that a lake is full of “wet water”. Water is by definition wet, so a substance that is not wet cannot be water. It is the same for a Leader. A man who does not Visualize cannot do what a Leader does. Of course, as with any other Skill, some men are more Visionary than others. Therefore, a person can still be a Leader without the Vision of a Martin Luther or a Martin Luther King. They will just be a different kind of Leader.

A Leader’s Vision is unique to him. But that does need mean that it must be the product of high genius or blinding and devine inspiration (although it might be). Unique can mean nothing more than a small change required to build the slightly better mousetrap, something incrementally different and better than the Status Quo.

In fact, while there may be a few great leaps forward in history, most Movements are built upon a series of incremental changes within a metamorphosis so slow that it would take time-lapse photography for the human eye to discern it. So, while the Wright Brothers’ Articulated Purpose of creating a machine capable of flight was the product of a Vision, so was the idea of putting flaps on the wings to help airplanes take off and land more efficiently.

A Virtuous Leader does not assess Vision through the prism of his own Virtue. This is not because he tolerates evil any more than he tolerates evil men, but only because it is dangerous to the Group to ignore the big and radically unique Outcomes that are periodically Visualized by evil and radically twisted minds. Hitler and Stalin were great (as in big, not as in good) Visualizers and there is little point in pretending otherwise. In fact, it is a critical mistake to soft-pedal the threat posed by Leaders based on judgments about their lack of character. This is what results from the confusion and conflation of the Leadership Skills with the Leadership Virtues. A man of low character can be (and often is) a man of high Skill.

Bad men are able to Influence Movement to Move toward horrific Outcomes all the time. A Movement led by an evil man will not fail solely because its foundational elements are immoral. Nazi Germany and the Soviet Union reside in history’s dumpster because the United States tore them down and put them there, not because the world waited patiently for them to rot from within for lack of Virtue. Had we done so, the world would be speaking German or Russian right now.

Vision is a Skill possessed by every person

Without trying to launch an eschatological argument, let us agree that (whether by devine spark or random selection) every person is empowered to Visualize. Man alone among sentient beasts can reason. While our individual natures and nurtures connect each of us in varying degrees to the perceived safety and comfort of our own Status Quo, we all nonetheless are able to Visualize something different, some better Outcome that is unique to our perception. To be incapable of that is to be not-human.

The question then is why do most people keep their Visions to themselves rather than putting them into action? The answer depends upon our placement on the Sur-Ser Continuum. A Survivor is too busy trying to live through the day to think of anything outside of himself. A Sad Clown is too consumed with trying to achieve a perfect balance between what he takes and what he gives to do anything but daydream of a better place. Only the Servant, the person whose Purpose it is to seek Advantage for others, has the capacity to transcend his own material and spiritual needs long enough to put Vision into action.

To Lead Right, a man must first Get Right and then Live Right. Then, and only then, can he capture his Vision to the Advantage of his Community.

Preblast for the week of August 2nd – F3 Memphis

[…] Source Topic of the Week:VISION (Q3.4) Recognizing Advantage And The Movement Required To Achieve It. Checkout the link and use it as talking points for shield locks, COTs, and on the slack […]