Seouled Out for F3 in Korea 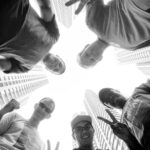 Did you know F3 has been active in South Korea for almost a year? How’d we get there and how can we support our brothers in the Land of the Morning Calm? Italian Job recently sat down with Lassie to learn more about this awesome group of men, half a globe away.


Italian Job: What is your F3 story?

Lassie: My journey with F3 began in 2019.  I received a random email from Bart Walker (HIPPA) asking if I would be interested in helping launch F3 in Boone, NC. Being a part of the fitness community, I had heard of the F3 movement and was very interested in seeing it brought to the High Country, so on January 19, 2019 I made my first appearance in the gloom alongside HIPPA, Chunder, and Zippy for the inaugural F3 Boone beatdown.  I was an avid runner and spent a decent amount of time in the gym, but on January 19, I was humbled.  That morning, I not only experienced a fitness routine that would push me to my limits, I also was introduced to a community of men who would transform my life.

I was a faithful member of this community until my family relocated to Seoul, Korea during the pandemic in 2020.  I’ve been downrange to a few AOs in SC and TN, but the bulk of my F3 story has been told in Boone and Seoul.

IJ: How did you get your name?

L: My F3 name is Lassie.  My hospital name is Steve Collie.  With a last name like that, naming me Lassie was low-hanging fruit at best.  But HIPPA had come locked and loaded with the name Lassie in the chamber.

IJ: Tell us about F3 Seoul. When and how did it start?

L: As I mentioned before, my family and I moved here during the pandemic.  While Korea did an excellent job of fighting Covid 19, the restrictions placed upon gathering together made community difficult to find.  To put things in perspective, when we arrived in January 2021 you could not leave your house without a mask, gatherings of more than four people were not allowed, movement was tracked through QR code check-ins, 14-day quarantines were required when you arrived in country and for anyone determined as a close contact.  Overall, it was a challenging time to make a new home in a new country.

By August 2021, we had met a handful of Ex-Pats and were slowly building community.  The restrictions were slowly lifting.  Gyms were reopening, but there were restrictions placed upon the type of music they could play.  I’m not kidding, it was illegal to play anything over 100 beats/minute.

In an effort to build a fitness community, I began mentioning F3 to my new friends.  We decided that in spite of the restrictions, we should give this a shot and on August 14, 2021, we launched F3 Seoul with myself and three FNGs – Buddy the Elf, Shoeless Joel, and Diplomat.

IJ: How many PAX do you have?

L: Because of the restrictions on public gatherings, we have kept our community small.  We average six to eight PAX.

IJ: Where do you workout?

L: We launch in the downtown Seoul in a neighborhood called Yongsan-gu.  It’s a great location because of it’s proximity to the Korea National Museum, the Yongsan Family Park, and even riverfront workouts along the Han.  Additionally, we’re close to a main subway line. This is important because most people in the city don’t drive.

We will be launching our second AO this Fall.  It will be a late evening workout that will hopefully bring out a few guys who have trouble with the early morning Gloom.

IJ: What Korean names do you have for some exercises? Burpees? Merkins? Side Straddle Hops?

L: Nothing original.  We use the standard F3 vernacular, but there is often quite a bit of mumblechatter every time we call for American Hammers.

L: COMMUNITY/CULTURE/LANGUAGE: In a city of 25.6 million, you wouldn’t think building community would be a problem.  However, it has been quite challenging to figure out how to build community among the Korean nationals.  Currently we are a merry band of expatriates. We draw from people from North and South America, Europe, and Africa.  After nearly a year of F3 Seoul, we have discovered that the challenge has been two-fold.  First is simply a language barrier.  Sadly our Korean is rudimentary at best and the majority of our relationships exist in the expat community.  Secondly, we are fighting an uphill battle in regards to gathering in the gloom.  The Korean work/school culture begins late in the morning and goes late into the night.  It is not uncommon for people to work until 9:00-10:00 PM.  Students will go to public schools until 3:00 PM and then attend their specialty schools (Hagwons) until 9:00.  There is a strong cultural drive for success and most Koreans will put in whatever time it takes to be the best.  That said, an early morning launch is not designed for success in this culture. As we have come to recognize this, we have been experimenting with a late evening launch.  At our first ever 9:00 PM launch, we had record numbers (six FNGs and three Korean nationals). Needless to say, this Fall we will be launching an evening AO that will hopefully open the door for our Korean friends.

AIR QUALITY: Another challenge has been environmental.  There are seasons when the air quality in Korea is toxic. This is not hyperbole. There are many days when you should avoid any outdoor activity and keep your windows and doors shut tight.  The ultrafine, yellow dust which originates from the deserts of Mongolia, northern China has been regarded as the cause for serious health problems.  When the AQI (Air Quality Index) is over 100, we are forced into creative options that do not allow us to abide by the 3rd F3 Core principle of meeting outdoors.  Several times we have worked out underground in parking garages or simply a large gathering space for an indoor workout.  Who would have thought that checking air quality would be such an important part of your Q preparations?

COVID: Covid has been challenging for all of us, but Korea has taken it to the next level.  When we launched F3 Seoul in 2021, the western world had begun to relax Covid procedures, but Korea was still adhering to very strict protocols.  The communal expectations limited gathering size and masks were absolutely mandatory.  Attempting an hour-long bootcamp workout in a mask is no joke.  In order to respect the culture and build a good name for F3 in our community, we have strictly adhered to the majority of the protocols and this has been the primary reason for our slower than anticipated growth.  The good news is that Korea has recently been slowly lifting the restrictions.  We are now allowed to be mask-free outside and to gather in larger groups.

L: Because we are a smaller group it has been quite easy to build quality relationships.  Not only are we regularly meeting for workouts, coffee, or lunch, it’s common for many of our men to communicate regularly through Kakao (the Korean version of Slack).

L: Come visit! Now that the mandatory quarantine restrictions have been lifted, we have already hosted a few downrange guys from the US (Spartan, C3PO, and Livestrong).  Follow us on Twitter @F3Seoul.