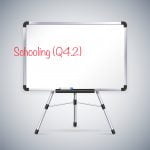 The principles of Leadership are both universal and timeless

Schooling is the first phase of the the LDP. It is where a man is provided with the head-knowledge he will need to be a Virtuous Leader. This head-knowledge is universal in the sense that it applies to every kind of Group regardless of its structure or the composition of its Membership. It is also timeless because it is premised upon a set of principles that have not changed over the many centuries of human history. What was True about Leadership for Moses as he traversed the Sinai at the head of the Israelites is true for you today at work or in the driver seat of your minivan full of Shorties.

Within the continuum of formal Leadership instruction that comprises Schooling there is a broad bandwidth of quality and intensity. Spending four years at West Point and reading Leadership For Dummies in one’s spare time are both examples of Schooling. Although they dwell at opposite ends of the quality/intensity continuum, they share the characteristic of the didactic dissemination of the Leadership Principles.

Schooling provides the common denominator all Leaders need to be Effective by imparting the timeless principles that Leaders need for the varying conditions which they will face. For example, Lead By Example is a universal Leadership principle that applies as much to a guy placed in charge of a church picnic as it does to a CEO of a Fortune 500 company. A Leader will lose credibility with the lady who volunteered to bring the potato salad just as quickly as he will with his board of directors if he does not lead by example. It is simply a must-do when it comes to Leadership, a precept that is both universal and timeless.

Which is not to say that a man should Lead a church picnic in the same exact manner that he would his business. A Virtuous Leader constantly micro-adjusts his style and approach to the prevailing conditions of his Group and its Mission in order to be as Effective as possible.

Thus, when a Virtuous Leader claims to treat everyone “the same” what he really means is that he treats everyone fairly, because one cannot get the best out of people by treating them all the exact same way. A highly trained and motivated Sua Sponte Leader needs little more than a nudge in the right direction and access to resources. Too much guidance will do nothing but frustrate or slow him down. In contrast, a novice Leader may need significant guidance and feedback to stay on track. The Virtuous Leader gives both people what they need without violating any of the Leadership Principles .

To do this well, a man must have a fully developed Leadership Foundation, which is the integration of his thought and action. If he truly believes (i.e., thought) in the Leadership Principle of Lead By Example (for example), then that belief will be borne out by his actions. In other words, because his Leadership Foundation is sturdy he will lead by example even when (especially when) he is in the grip of the Flux or encountering Hardship. Through Practice and submission to Pain and Chaos, he will have both Accelerated his Durability and deeply integrated his thought and action such that he can Lead Right regardless of the circumstances in which he finds himself.

One reason that Schooling is so critical to a man’s Leadership Foundation is that so much of what a Virtuous Leader must be and do is counterintuitive. For example, it is our human nature to seek full Control over all our efforts and to garner praise while avoiding blame for the results they produce. But the Virtuous Leader must learn to completely invert this formula. Because he is a man who Influences Movement to Advantage, his IMPACT and the change he effectuates will largely be through the actions of others that he has inspired and guided. The more men he Influences, the more Movement he initiates and (ultimately) the more Effective his Leadership he is.

While the results of a Virtuous Leader’s Influence will usually be Advantageous to the Group, there will be times that they are not, at least in the short run–not every venture is a success. But what is always true is that the particular Outcome obtained (whether Advantageous or not) will be greatly dependent upon the actions taken by the Group Members in response to the Leaders’s Influence–much of which is outside of his direct control.

If a Leader’s Influence results in an Advantageous Outcome the Virtuous Leader does not bask in the ensuing praise–he passes it on in full measure to the Group Members regardless of how little he thinks they did (in comparison to him) to pull it off. Likewise, the Virtuous Leader fully accepts the entire blame if the Outcome is unwanted, regardless of whose actual fault it was. Success belongs to the Group, but Failure is the burden that a Virtuous Leader must bear alone. This is the Leadership Principle of Pass Praise/Take Blame.

Because Pass Praise/Take Blame is contrary to human nature it is very difficult to apply, particularly under periods of high stress and limited visibility. Yet it is absolutely critical to what a Virtuous Leader is and what he does. Even though it is the hard-wired desire of every man to retain praise and pass blame, no man will follow another man for long who tries to Lead that way.

My initial Schooling in Pass Praise/Take Blame took place when I was an ROTC cadet in college. It was delivered to me in a classroom from a sergeant who wrote it on the chalkboard in big letters: PASS THE PRAISE AND TAKE THE BLAME. I was retaught the same Leadership Principle again (and again) in the several Leadership schools the Army sent me to during the nine years I was on active duty. The men who instructed me on this principle also told me why its application was critical and how it was likely that I would initially and repeatedly fail to apply it properly when confronted with the opportunity to do so, until the one day when I wouldn’t. And then I never would again. And, at least for me, that turned out to be so. I got it wrong (a lot) until I got it right, and then I never got it wrong again.

Because anything is possible I suppose that I could have learned Pass Praise/Take Blame without Schooling, but I doubt I would have. To do it wrong (as I often and initially did) and learn anything from the experience, it had to be first be instilled as a Leadership Principle in my mind. To know how to do it right, I had to first be taught what right was. And Schooling is the best place for that.

Before anything can be heart-knowledge, it must first be head-knowledge.

Although it occurs during the first phase of the LDP, Schooling never really ends in the life of a HIM who seeks to Lead Right through the Practice of Virtuous Leadership. Practice is the practical application of a Skill to turn head-knowledge into heart-knowledge. Earlier I used the example of my career as a lawyer to illustrate this process. Law school taught me what I needed to know to be an attorney, but it has been practicing law that has taught me how to do what an attorney does. Without Practice, what I learned in law school would have been useless or, at best, theoretical. I would have been incomplete.

Yet the inverse is true as well, in that I would not be much of a lawyer if I had never learned the law in school, didactically. At best I would be like a man who had learned the piano by ear and could play a few songs, but could neither read nor write music–not really a musician in the full sense. Likewise, without law school, my highest level would have been as a talented mimic, a simulacrum of a lawyer rather than the real thing. A Mascot.

Moreover, the Practice of law (the doing of it) also stoked a desire within me to learn more, to go back to school in a sense by reading about it on my own. The same has been true with my Faith. The more I have Practiced the application of its tenets, the more I have sought to understand the theology that underlies them through learning rather than just doing. For me, the schooling in my profession and Faith continues alongside the Practice of both.

At 25 I thought I had learned all there was to know about Leadership. By 55, even though I had learned so much more in thirty years, I could also see how much further I had to go, and that Schooling for me would never really end–that is, if I am truly Committed to Leave Right.