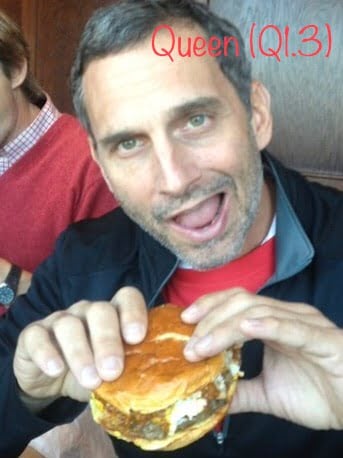 The Daily Discipline Over What Is Put Into The Body

Man does not stay Fit through exercise alone

The Queen is an integral Guardrail in the HIM’s pursuit of proper personal alignment. As with chess, if the Queen is taken off the board, it is not long before the King finds himself checkmated. No matter how hard and consistently a man may exercise, if his diet is haphazard his Fitness kingdom will not long stand. The Queen cannot be ignored, even by the strongest of Kings.

I have dreamt my entire adult life of that wonderful place where I could out-King my Queen. Surely, I’ve always thought, there is a magical number of miles I could run in a week that would enable me to eat whatever I want without gaining weight. Forty, fifty, sixty–whatever it is, once I had attained that mileage count, then I could abandon the grating discipline over what I put in my mouth. Repeatedly, I have had to relearn the same hard lesson that this wonderful place does not really exist, and that my belief that I could find it is a cruel self-generated hoax. It is a fool’s quest based upon a lie.

The truth is that to Get Right I have to exert daily discipline over what I put in mouth no matter how fast I am Accelerating my King. In fact, it is in those periods of Acceleration that I have to be more disciplined in my service to the Queen. The reason is simple: more exercise means more calorie burn and more calorie burn means more hunger. The harder I exercise, the hungrier I get–the hungrier I get, the more I eat. That is the reason I can’t out-King my Queen. The faster I go on the Fitness road the higher my Guardrail needs to be to keep out of the ditch.

The first step to serving the Queen is accepting that truth. The next step is doing something about it.

Portion control is the key to weight control

It is tempting to believe that some foods are bad for us, that If it tastes good we should spit it out . But the HIM is not an ascetic living in a monastery. He knows that while what he eats may often be outside of his control, how much he eats is always his responsibility. Besides, it takes too much time to learn the nutritional science required to properly demonize some foods for the glory of others. It’s far more realistic (and thus Effective) to simply accept that if the SkyQ saw fit to put something edible within our reach, he must have intended for us to eat it–just not so much of it. In other words, all food is good–the problem is one of portion and balance.

The Neolithic Revolution began about ten-thousand years ago. That was when man discovered agriculture, which led to the wheel and then the ability to write. Since then, recorded human history has been driven primarily by man’s effort to reliably feed himself. Even today, there are parts the world that suffer from periodic famine.

But not in America in the 21st Century. Here and now we have solved the age-old dilemma of hunger and replaced it with a wholly new problem: obesity.

Think about what a time traveler from 1870 would have to say about the drive-thru window at McDonalds. In his day, 80% of the American population farmed. That means that only two out of every ten people did not spend their day in pursuit of putting food on the table. Today, that effort only requires 2% of the American population. Now the overwhelming majority of us can feed ourselves by walking ten steps to the car, driving to a window in the side of a colorful building and exchanging six bucks for 1500 calories.

The time traveler would likely think this to be wonderful, incredible. To him, McDonalds would appear to be the answer to a dream, the solution to everything that has bedeviled man since the dawn of time. But that would only be his first thought. His second should be that there seems to be a lot of fat people rolling through that drive-thru lane, more fat people than he had ever seen back in 1870. Ultimately, he might just ask himself if there wasn’t something of value in the Hardship of having to struggle a bit to feed oneself.

Maybe, but let’s face it, the genie is out of that particular bottle. We are really good at producing food in abundance with less human effort than anyone ever thought possible. The reestablishment of an agrarian society full of skinny people is not a viable solution to the obesity problem. Nor is there much utility in enforcing utopian restrictions over the size of the Mountain Dew cup or forcing McDonalds to stamp every Big Mac with a useless warning that “eating this will make you fat!” When it comes to the Queen, rules don’t work. People find a workaround to get what their heart desires. What has to change is the heart. And this is done through Bricklaying.

Bricklaying is the formation of positive Habits–here the Habit of portion control and balance. To lay that Brick, the Q engages in trial and error to learn how much he can and must eat to maintain his ideal weight given the amount of calories he can burn through exercise. In my experience, this took some time but was not difficult. I started with the internet which told me I could ingest net-2100 calories per day to keep my weight at 175 pounds. So, for example, if I ate 3000 calories that was okay if I burned 900.

By counting and tracking my calories consumed against calories burned over time I found net-2100 to be accurate enough. If I went under 2100, I lost weight over time. If I exceeded it, I gained weight over time. But if I stayed consistently close to net-2100 my weight fluctuated around the mean a bit every day but remained steady over time.

The daily fluctuations I attributed first to the fact my body is dynamic, complicated and not subject to exact measurement. Secondly, the data isn’t exact, particularly calories burned, which I calculated with my Garmin. I found that it seemed to undercount calories burned during a bootcamp type workout, which is what I do half the time. But the bottom line is that I found net-2100 to be an accurate enough foundation to set my Brick on. At net-2100 I can maintain my ideal weight of 175 pounds.

Obtaining the knowledge I needed to practice portion control was something I did internally, by myself, like a science experiment I conducted with my own body. That I found to be the easy part of serving my Queen. The hard part is what came next, and that is daily discipline of doing it. For that, I need help.

First, let me acknowledge that not every man needs Accountability to maintain his ideal weight. Some men are ectomorphs who can’t gain weight even if they want to. Others are mesomorphs whose high metabolism turns extra calories into lean muscle. If you have either of those body types you can skip ahead to the next QPoint. Or, better yet, read this next section so you can help people in your Groups who fall into the third category: endomorphs.

Endomorphs are men (like your truly) whose bellies make great body-fat storage units. Because I am an endomorph my body reacts quickly and predictably when I lose portion control. When I eat too much, I get fat regardless of how much I am exercising. While I yearn to be a mesomorph who can out-King his Queen I have come to accept that I never can–and recognize that the yearning itself is a gilded ticket for a free ride on the ferry boat of self-delusion. Trying to out-King my Queen leads me to abandon the daily discipline over what I put in my body, which leads me to get fat–every time I try it. The ferry boat only has one destination, and that is fat-guy island.

The truth is that I need help to resist accepting the golden ticket. I need the external enforcement mechanism of Accountability to maintain the Queen. And, ectomorphs and mesomorphs notwithstanding, so do the majority of other men.

The first step in Queen/Accountability is to set a Standard. While that can be difficult in other areas of a man’s life, with the Queen it’s simple, it is his ideal weight and his ideal FUPA . These two measures are both objective and truthful. They don’t lie or coddle, they just deliver data. I know they work because whenever I take the golden ticket and try to out-King my Queen my first step is to abandon them in favor of the subjective untruthful “standards” of how I look and how I feel. The mirror and my feelings lie to me–they are the dock workers on the ferry boat of self-delusion. Their job is to get me on the boat. Listening to them is a mistake.

The second step is Enforcement, the external force that applies the Standard. That too is simple with Queen/Accountability, it starts with a daily weigh-in and FUPA-taping, what we call the LBZ . To be Effective, the LBZ has to be done at the same time every day (it doesn’t matter when, but first thing in the morning is best) with the same measurement devices. This takes out the fluctuations as much as possible.

For a highly disciplined man, the single Brick of the LBZ might be enough. For me, it’s not. I also need the second Brick of conveying the results of my LBZ to men to whom I have delegated the authority of Enforcement. They know (because I told them) that if I don’t convey my LBZ (or a legitimate reason why I couldn’t do so that day) then it is probable that I have accepted the golden ticket and am en-route to fat-guy island. If so, their job is simple. They are to grab me by the collar and yank me back to the dry ground of reality. The harder the yank and the closer I still am to the dock the better.

The final step is Consequence, which is the result of Enforcement. If my LBZ pushes up above my ideal weight/FUPA I reduce my daily calories from net-2100 to net-1500 until I get back below it. Experience has shown me that net-1500 is where I lose weight. Your results may vary. Net-1500 is a hungry and miserable place for me. I don’t like it and don’t want to stay there any longer than necessary. Which is a great motivator to keep laying that Brick of the LBZ every single day. It reduces the length of the misery of the Consequence.

Now would be a good time to anticipate some pushback my views on Queen/Accountability that I frequently encounter by saying this: the Bricklaying system I just described is what works for me. If you have a different system, particularly one in which is not reliant up net-calories and the LBZ, I am not arguing with you. If your system works, use your system. My only contention is that for most men weight control requires a systematic approach because we have too much food that is too easy to get at too cheap a price to rely on exercise alone to stay Fit.

To Get Right, we have to serve the Queen.