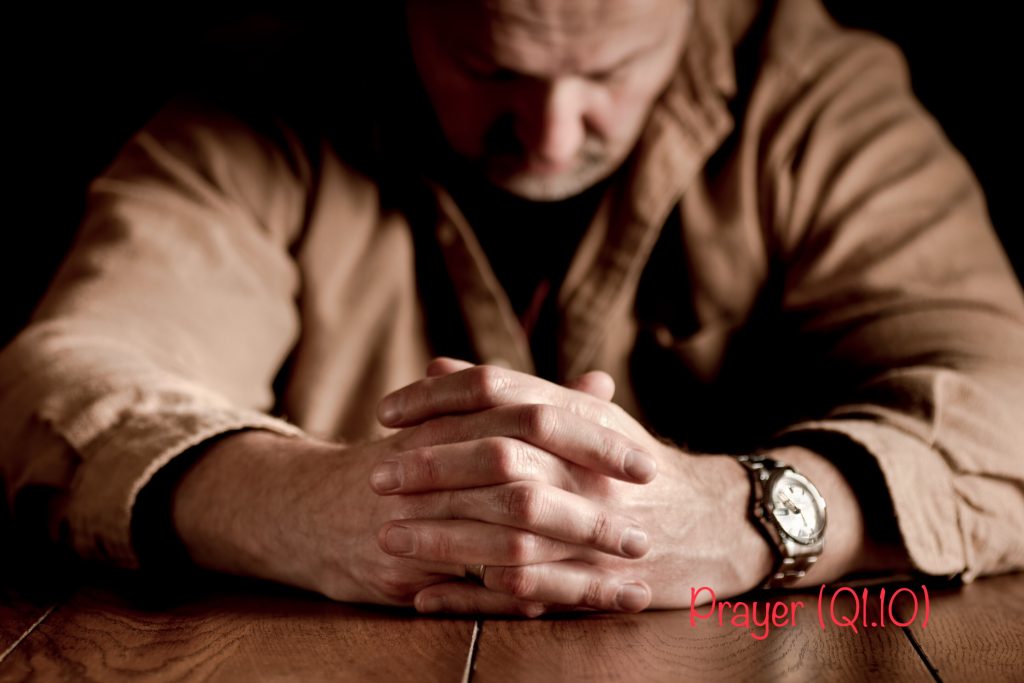 A Virtuous Leader must have Faith

The third component of the Get Right is Faith, which is a man’s Right relationship with his Creator, the SkyQ.

Recall that the Get Right is the first of the four quadrants of the QSource. It is the pursuit of proper personal alignment. The Get Right is a condition precedent to the other three quadrants, such that a man who is not properly aligned cannot Live Right, Lead Right or Leave Right. To do those things he must first Get Right. To be Right is to be in the normal and upright position–where a man should be. This is achieved through the DRP, the daily Commitment to Accelerate Fitness, Fellowship and Faith.

Faith is the third component of the Get Right. Faith is a man’s Right relationship with his Creator. A man cannot Live, Lead or Leave Right unless he is Accelerating this relationship along with his Fitness and Fellowship. He does it in three ways, through Prayer , Study and Meeting . This QPoint and the next two are focused on Faith.

Before we get to the meat of Faith, I have a disclaimer of sorts. Because I am a Christian my understanding of Faith is informed and guided by that particular belief system. To represent otherwise would be dishonest. But that does not mean that the QSource views Faith strictly from the Christian perspective. Instead, we advocate for the Acceleration of Faith in men of all creeds because we have discovered that a man without Faith cannot Get Right. Without a belief in a power outside of himself a man will have no choice but to view himself as the king of the world. A man who believes that lie cannot be a Virtuous Leader because he will be incapable of seeing himself first as a servant. Instead, he will be a Jackass, a man who lives for himself rather than Living Third .

I can attest to this because it was once true of me. I was a Jackass who saw myself as the king of the world, accountable to no one and obligated only to follow a set of rules I wrote for myself. Living first, I ruled from a rickety throne built of toothpicks and Elmer’s glue. It wasn’t until that Jackass-throne of mine came tumbling down that I was able to begin to Live Third. It was then, and only then, that I was able to begin the hard work required to Get Right.

A Mascot can fake his Faith through mere attendance at church, synagogue or mosque and by mouthing of whatever pious-sounding dogmas that accompany his self-proclaimed or Goo-driven worldview. But that only works for the Mascot. The HIM needs more. He needs to know the truth so he can live it out. Like every other aspect of his life as a HIM, he demands the real thing, the EQV–to actually be rather than merely seem. Because he is a Pro, the HIM seeks the truth so that he can get prepared for the expected and be prepared for the unexpected.

The What-What is the amalgam of the two questions a Pro has asked from the time man first tried to associate what he was doing (the things he could Control) with what was happening in the world around him (the things he could not Control). The first WHAT is what will happen when I die? The second WHAT is what does that mean about the way I should live? To be in Right relationship with his Creator, the HIM continually seeks the answers to the What-What.

For a prehistoric man the fact that a lion had killed his oldest son while he was off hunting might have been the random product of the man’s bad luck. Or, he thinks, it might be something deeper, a punishment delivered by the nebulous force that directs the lion–a response to something the man has done (or not done) that has displeased that force. The man, reasoning and sentient being that he is, naturally begins to question his worldly happenstances. Were they the result of chaos or design? If there is a force at work that directs events, how can I appease it so that the lion doesn’t kill my my second son too? If there is something to expect, how can I best get prepared for it.

Maybe (he thinks) I should kill the lion, dry out its skull and mount it over the mouth of my cave. Maybe that homage to the lion would satisfy the force in some way that will keep at bay the other hungry beasts that surround me day and night. If it seems to work (or even if it doesn’t), the man comes to believe that he’s discovered a design in the force, that it is in fact The Force, with a logic that he can unlock to his Advantage if he can just discover precisely what it demands of him. So, he begins talking to The Force, seeking the clues to staying on its good side to preserve his life as long as possible. Even if the answers are few and far between, he finds a comfort in the asking.

But that comfort leads the man to a new question. If The Force directs the lion on earth what about the period after life has ended, when the man has shut his eyes for the final time. He has observed death in others. He has seen the light depart from their eyes as they draw their last breath. Where does it go? Does the light die with the flesh, or does it go somewhere beyond the material world? Does it join The Force, and if so, how can he make sure his light joins The Force as well? Should he be talking to The Force about the next life as well is this one?

Ultimately, the ancient man finds himself asking the same things that we still ask today:

Stripped of their dogmatic flourishes, every worldview boils down to the What-What. If I have been created, what of that which created me? These are the inherent questions of the Super Unknown.

Despite all that modern man has learned of the material world, the Pro’s quest for knowledge of what lies beyond it still persists. Though we seem to have unlocked so many of the secrets of what can be known of the world we can see around us, man alone cannot answer the What-What for himself. He can only do that through Prayer, by talking with his Creator in order to build his Faith.

Prayer is the Pro’s antidote to anxiety

All men are subject to the emotions of fear and worry. In proper measure, they are an important part of the bundle of instincts that protect us from danger. Fear keeps us clear of the lion and worry spurs us to teach our sons to do the same. As such, fear and worry are necessary for self-preservation. But, like all good things, fear and worry can become so excessive that they interfere with our daily lives. They can take over. At that point, our emotions have reached a state of anxiety and anxiety is a Jester that hinders Acceleration.

A man has four options when anxiety threatens to overwhelm him. He can 1) surrender to it; 2) confront the emotion himself; 3) seek help in battling it from another man; or 4) Pray.

Option one doesn’t work at all. Men who surrender to anxiety as a permanent condition of their lives are the Amateurs who end up as Mascots with their boats capsized in the river. They cannot hope to be Right. At best, they can only do their best to seem Right.

Option two is only marginally better. Unlike the surrendering Mascot, the man who confronts his anxiety by himself has at least joined the battle. However, he is unlikely to succeed. Anxiety is a powerful emotion. How can a man alone be sure that his fear and worry is not warranted by his circumstances? Maybe the lion really is at his door. A man alone cannot provide himself with the objective counsel required to determine whether his emotions have crossed the line from healthy self-preservation into unhealthy anxiety.

Option three, seeking help from another man to battle anxiety, is far better. It is a major Advantage arising from the Shield Lock–one may be overpowered, but two can defend themselves. However, if that is all a man does then he is still acting like an Amateur rather than a Pro because he will continue to try to Control his anxiety rather than getting ready for it through Preparedness. To truly overcome anxiety, he must also Pray.

Anxiety is an emotion that all men can expect periodically–it is part of the Flux. What is unexpected is the timing of it and the degree to which it will hinder Acceleration. As a result, anxiety is a condition that has elements of both the expected and unexpected. We can get ready for some aspects of it but must be ready for others. When anxiety arises unexpectedly it is the man who is in Right relationship with his Creator who is best able to withstand it because he will be equipped with Hope.

Hope is not self-generated. It starts with a firm belief that some force outside of oneself is directing Events and that the force has our best interests in mind. Through Prayer, the HIM builds his relationship with that force, the Creator, to disabuse himself of the fatuous notion that the force is distant, uninvolved or capricious.

To have Hope in the Creator, a man must speak to him every day through Prayer. It is a positive Habit, one of the Bricks that comprise a HIM’s Guardrails–the foundational precepts that protect and incentive his Acceleration to Advantage. They make the difference between the Pro and the Amateur.

Scroll back to top