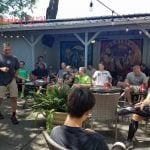 The Public Manifestation Of Faith

Faith is best Accelerated in the company of others

However he seeks answers to the WHAT-WHAT, the HIM does not go about it alone. He recognizes that a man who believes in the efficacy of Prayer and seeks Truth through Study must externally proclaim his allegiance to the promulgator of both. He does this through Meeting, the public manifestation of his Faith.

There are logistical obstacles to Meeting. A man has to get his family up in time, fed and in the car. He then has to park and find a place in the pew without killing one of his children first.

Having fought through the logistical obstacles, he may then ask himself why he bothered. He often finds himself sitting next to someone he doesn’t much like, someone with whom he would never voluntarily socialize. He may not like the way the service is conducted or the message that is disseminated. He has other things he could be doing–maybe things that he should be doing. Why must he work so hard to get to a place that aggravates him so much?

The HIM knows all these reasons not to Meet (and many others), yet he persists in doing so because he also knows that Meeting has a Purpose of its own that has little to do with his Happiness and everything to do with the Outcome for which he is responsible as a Leader.

Because of the Flux, all men have have their ups and downs. We spend some of our time on the mountaintop of our Faith-life, when we want to share our Joy with every stranger we meet. But we also have to slog through valleys of spiritual dryness, when all we really want is to be is left alone to lick our wounds.

Ironically, it’s those latter times (when Meeting is the last thing we want to do) that are the instances in which we most need to be there, so that we can share the strength of our Brothers who might just be on their own mountaintop. How much easier it is to reach up from the pit when a Brother is reaching down to meet us.

The odd thing that a HIM discovers when he summons the discipline to Meet despite being in a valley is that there will be inevitably be a man there for whom the valley is an even darker and deeper place. Confronted by that Brother more direly in need than himself the HIM will forget his own woe just long enough to minister to him–and in the momentary forgetting of himself, POOF, find that he has returned to his own mountaintop.

This is the power of Faith and the secret sauce to why F3 is an Effective Organization. The Joy of forgetting oneself in service of another surpasses all understanding. It is the foundation of Hope.

To leave a legacy, a man must be competent in the practice of his Belief System

To be competent in one’s Faith requires Skill, which results from Practice–practical application that turns head-knowledge into heart-knowledge. Meeting (like Prayer and Study) is a Brick in the Practice of Faith. It is a positive Habit that increases a HIM’s Skill. Because a Virtuous Leader lives according to a particular Belief System, he regards the Acceleration of his Faith as a Mission-essential Task , something that must be done Competently .

A man who is an Effective Leader will be followed while he physically present to apply direct and Proximate influence. If he is very Effective, he may also be able to exert indirect and less Proximate influence outside of his physical presence. However, for his influence to outlast his lifetime requires a Legacy , and only a Virtuous Leader will create that through the consistent application the Leadership Skills in a manner that is both guided and governed by his Belief System.

Meeting holds the shepherd Accountable to the truth

Candor is graciously telling the hard Truth and demanding to hear it from others. It is one of the Leadership Virtues. Without Candor, a man cannot be a Virtuous Leader.

Candor is a rare quality, because people are hard-wired to avoid the adverse consequences that often arise from knowledge of the Truth, whether it is their own knowledge or the knowledge of those around them. Leaders will hide the Truth from their followers to avoid Accountability for their own failures, but also for a less selfish reason: to avoid bringing them pain. Because Truth is Disruptive, a weak Leader will shy away from telling it. He will be less than Candid with his followers and justify it with the delusion that he is sparing them out of love. But it’s an odd kind of love that leads a man to tell a Brother that he is Right when his boat is actually capsized.

This is especially true with Shepherds, those who are the spiritual Leaders of a Faith Group. Shepherds are charged with the duty to disclose the Truth of the Group’s Belief System to its Members. If the Belief System is one that requires subordination of one’s will to a higher power, then the Truth will be confrontational to those Members who find that undesirable. It will result in disagreement and pain. Yet, to be Candid–to be what a Leader is, a Shepherd must do it boldly.

Every musician plays to his audience whether he realizes it or not. What effect on the heart of a Shepherd to look into the front row of his flock and see the strongest men he knows in his Group sitting there attentively? Would that not make him bold, to know that he has the support of the men upon whom he would most be able to rely in the confrontation of Hardship? Would that not make him more likely to be Candid and graciously tell the hard Truth?

Conversely, the absence of HIMs in the pews leads the Shepherd to grow timid in his willingness to speak boldly and provide Truth to his flock. It leads him to reshape his message to appeal to those who are there, those for whom subordination of their will is not a choice that they are capable of making without the influence of a Leader.

The presence of the HIM holds the Shepherd Accountable to the Truth.