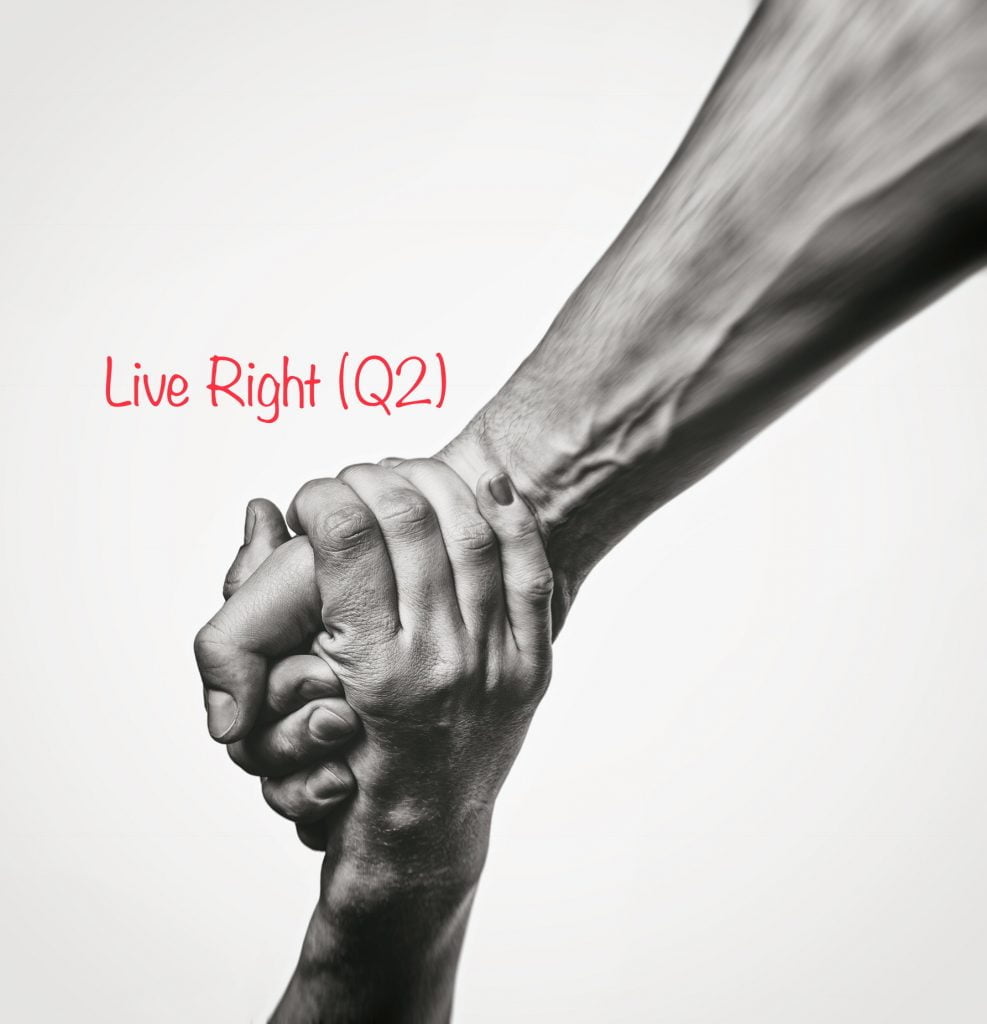 The Dedication To Purposefulness

Live Right is the second quadrant of the QSource. It is the HIM’s dedication to Purposefulness.

Purpose is an Advantage sought. To be Purposeful is to Commit oneself to bringing an Advantage into fruition. An Advantage, which is a superior circumstance achieved by Movement, is by implication a thing external to a man in that it requires the involvement of other people to achieve. Whereas the first quadrant, the Get Right, was focused on what a man must do to achieve proper personal alignment and Accelerate himself, the Live Right is focused on the HIM’s IMPACT on the lives of other people and how he helps them to Accelerate.

To Accelerate is to increase the pace of Movement away from the Status Quo and towards Advantage. Advantage cannot be achieved by a single Movement, but must be obtained progressively by traveling through a series of Waypoints, which are the stepping stones along the path. Waypoints are things done with Deliberatude by a HIM who has an Ultimate Purpose in mind.

Because Purpose is outside of oneself, living Purposefully requires self-sacrifice. A man who Commits to Purpose abandons service to himself because he finds that he cannot serve two masters. But a man who has not yet gotten Right, whose boat is still capsized in the river, can only serve himself because he is consumed with his own survival. Treading water and fighting the current, he will have nothing left for anyone else. Stuck in his Status Quo, he cannot have IMPACT on others.

But that changes with the Red Pill, the decision to be a HIM who is rather than just a Mascot who seems to be. Once a man takes the Red Pill, and if he keeps on taking it every day, he begins to Accelerate his Fitness, Fellowship and Faith and move towards proper personal alignment. Ultimately, he becomes Right, a man who is in the normal and upright position, fulfilling the role that was designed for him by the SkyQ.

A man who has gotten Right is no longer expending most of his energy to merely survive. As his personal Guardrails increase in strength through the building of positive Habits, he finds himself gradually thinking less about his own Existential Continuity and more about what the SkyQ has planned for him and how he can be a Servant to those around him. At this point, he has started to Live Third, which is to consistently and deliberately place oneself behind Creator and Community.

This is how a man is supposed to live. It is the Right life for a man.

In the Q1.10 (Prayer) we defined a Jackass as a man who lives for himself rather than Living Third. This is a man with no belief in a higher power outside of himself who has no choice but to think he is the king of the world.

Having once been a Jackass, I can attest that this is a dangerous belief for a man to have, both for himself and the people who depend upon him. It leads a man to make up his own self-serving rules for living. But that is only one part (the smaller part) of the danger. The bigger problem is that without the influence of a Belief System to guide him, a man ends up living on the wrong end of the Sur-Ser Continuum, which is the span between a Survivor and a Servant.

On the Survivor end of the Sur-Ser Continuum are those men can who only stay alive by feeding off of their Community. It’s not just that the boat of their lives has been capsized, but that they have actually given up trying to stay afloat on their own and have been hauled into some other guy’s boat to keep them from drowning.

At the opposite end of the continuum are the Servants, those men who have gotten Right and now Live Right to the Advantage of their Groups while expecting nothing in return. These are the HIM in whose boats the Survivors are riding.

While the Survivor and the Servant anchor the extreme ends of the Sur-Ser Continuum, the great majority of men live their lives in quiet desperation somewhere towards the middle. This is the province of the Sad Clowns who, while not Right, still manage to cling to Existential Continuity without much Community intervention. Externally, Mascots that they are, they may even appear to be Servants themselves–but that’s only part of the pose. Internally, they are gulping air and silently screaming as their capsized boats are buffeted madly by the chaotic currents of their lives. They are men determined to keep secret the fact that they have lost Hope.

The bad news for a Sad Clown is that the Sur-Ser Continuum is not static. If he lives long enough (absent something else interceding) the Sad Clown will likely slide downward into Survivorship because the effort to live life as a Mascot is exhausting. The closer he gets to meeting the SkyQ face-to-face, the less a Sad Clown will find that he is able to keep up the pose.

The good news for a Sad Clown is that the Sur-Ser Continuum is not static. No matter how long he has been a Sad Clown, any man can begin Movement toward Servanthood, but only through the IMPACT brought about by something else interceding. The HIM, because he lives to Purposefulness, is the agent of that intercession.

The HIM is also a man who finds that in his effort to Live Right by carrying the Survivors and IMPACTing the Sad Clowns he gets an unexpected benefit–he himself is kept Right. It’s ironic, but having abandoned Existential Continuity in order to Serve , the HIM finds that he is kept personally aligned.

Although the HIM must Get Right to Live Right, once he begins Living Right, it is far easier for him to stay Right.