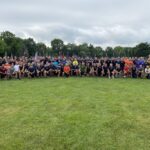 GTE 30 kicked off Friday, July 15, 2022 at 1800 with The Rally which took place at the Joliet Union Station Grand Ballroom located in Joliet, IL. PAX from across the country converged on this location where we had the opportunity to enjoy some fellowship with other men participating in GTE 30.  It was a great opportunity to share stories, put some faces with names, and let our guard down a bit prior to all the planned weekend activities.  There were a few welcome speeches from some of the local F3 Plainfield PAX SLT and then the GTE 30 Trainers provided the men with some motivation reiterating the F3 Mission as well as providing PAX some perspective on the importance of GrowRuck and how to take what we learn (head knowledge) over the  weekend and apply it (heart knowledge) not only in the planned GTE 30 ruck events, but also apply in our own lives and share this experiential learning opportunity with the PAX that were unable to attend the event.

For most PAX (a few of us went to a local F3 Plainfield Early Boot Camp (EBC) at 0515) Saturday July 16, 2022 kicked off at 0630 with the KingBuilder which is essentially a one-hour beatdown Qed by the GTE 30 trainers. Each of the three trainers (Dark Helmet, Bartman, and Urkel) had the opportunity to Q a portion of the beatdown and they certainly succeeded in getting the juices flowing for the 130 plus PAX in attendance.

There were several moments over the course of the GTE weekend that stood out, but one that most of the PAX in attendance likely won’t forget was the Flying EH that took place at the KingBuilder. While the GTE PAX were getting their sweat on, a local resident happened to be taking a stroll through the park. Without hesitation, a few PAX coerced the guy to join us and he finished along with the rest of the GTE PAX. After a brief moment of confusion about when an FNG is named (F3 Plainfield names FNGs before the NOR), Dark Helmet had the pleasure of introducing Pimp My Ride to the rest of the GTE 30 participants. 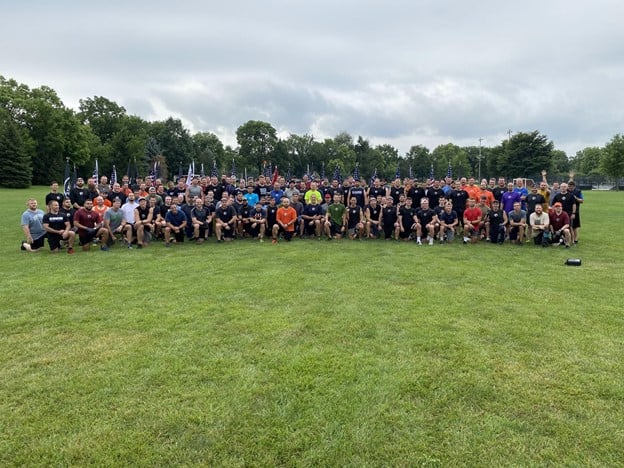 At the conclusion of the KingBuilder, most of the PAX traveled about 20 minutes up the road returning to the Grand Ballroom at Joliet Union Station where a breakfast fit for kings was served starting at 0800. Once the PAX stuffed their gullets, they relocated to the outdoor patio at around 0830 and that’s where the head knowledge began (Grow School). For several hours, the GrowRuck trainers laid down some leadership knowledge covering numerous elements found in the QSource Manual of Virtual Leadership, specifically the Get Right, Lead Right, Live Right, and Leave Right quadrants. It would be impossible to articulate in writing how important this training was so it may be best summarized by stating, go read QSource (head knowledge) and then go put what you’ve learned into action (heart knowledge).

Just prior to the GrowRuck leadership school ending for the day, 15 PAX (YHC included) had to depart a little early (1230) to prepare ourselves for the first ever GrowRuck “Impact Ruck” of which we previously volunteered to attend.  The rest of the GTE PAX completed the leadership school and most of them headed out to rest, refuel, and mentally prepare for the impending overnight rucking event that kicked off at 1800. 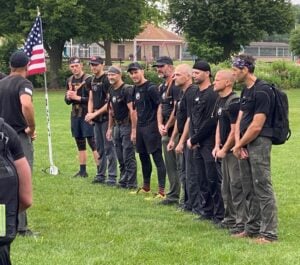 There was only one instance where a PAX didn’t have all the required gear (missing Photo ID) of which the PAX had to pay for near the end of the GTE. Upon completion of gear check, the PAX relocated to a nearby area where they participated in the previously announced Army Physical Fitness Test (APFT). PAX were graded on their success or failure of timed Pushups, Sit-ups, and a 2 mile run. A 60% passing score based on a PAX age range was required to continue moving forward with GTE 30. Once all the PAX completed all three phases of the APFT, those that failed any portion of the APFT were placed in a PT remedial group while the rest of the PAX assembled into platoons and began the painstaking, Welcome Party portion of GTE.

Beatdown after beatdown, each cadre had a chance to take the souls of each platoon as the PAX rotated from one cadre to the next. After what seemed like 2-3 hours of non-stop physical and mental strain, all the PAX to include those participating in the PT remedial group were reunited and the rucking portion of GTE began.

Each platoon (Red, White, and Blue) moved into position and took control of their first set of heavy objects that would accompany them along most of the 19-plus mile rucking excursion. Along the way, the PAX faced many obstacles, both mentally and physically.  Platoon Leaders (PLs), Assistant Platoon Leaders (APLs), and squad leaders were randomly selected by the cadre and those leaders had opportunities to put into action leadership throughout the various evolutions. After each evolution, After Action Reviews (AARs) were conducted on the PLs/APLs identifying both leadership successes and failures. Each passing of the leadership role resulted in PAX improving on what worked in the previous evolution and changing those things that didn’t work – we call this the Leadership Development feedback loop (Schooling, Apprenticeship, Opportunity, and Failure). Along the 19-plus miles, PAX picked up/or dropped off more heavy elements such as 10ft telephone poles connected to each other with three foot chains and 40ft, 500lb slosh pipes as well as various weighted sandbags.

The GTE 30 PAX were exposed to numerous elements such as submerging themselves and personal equipment in a local pond, rucking up hills, walking through farmland ditches and navigating along very narrow bridges and roadways. It was everyone’s responsibility to keep each other safe and accounted for and there was never a doubt that safety and accountability were paramount. The Cadre had planned stops along the way for PAX to briefly refuel and recover before starting the next evolution of the overnight rucking event.

As the morning light began to show itself, the GTE 30 PAX made their way to the Forgotten Warrior PTSD Memorial nestled in the Channahon State Park. It was there that the PAX had a moment for reflection. One among us (Brick – F3 Geneva) sang the National Anthem that truly ranked right up there with renditions you might hear at professional sporting events. Another among us (Dilly Dilly – F3 Plainfield) shared his personal story of hardship that turned into grace.  We honored those among us who currently serve or have served their country and then the PAX formed back up and headed out for the remainder of the rucking overnight event.

Enroute to our final destination, the GTE PAX stopped at the Channahon Fire Department where we thanked the men and women for their continued duty and sacrifice and then the PAX were blasted for several minutes with high pressure water hoses (it was actually reinvigorating to be honest). The PAX departed the firehouse and as we continued in formation to our final destination, the cadre identified several PAX within each respective platoon (at some point 4-5 at a time) who became simulated casualties and as such had to be carried along the final route. Leave No Man Behind, but Leave No Man Where You Found Him!  Aye! 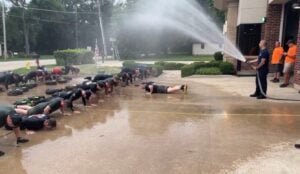 Upon arrival to where the 94 Pax had first departed several hours earlier, the area was secured and the simulated casualties were accounted for. The GTE 30 Cadre moved the Red, White, and Blue platoons into formation and at some point Cadre Danny relayed to the 91 PAX that completed the overnight ruck, congratulations GTE 30 is complete. The PAX did pay a due that was owed and completed a few sets of bodybuilders to account for the missing item found during gear check and then the patching of the 91 GTE commenced. Pictures were taken, the mumblechatter was strong, PAX were able to breathe a sigh of relief that GTE 30 was complete. GTE 30 PAX, We are stronger together!

For the first time GTE brothers, it was certainly reinforced that a GTE is not about you, but rather about the man to your left and right.  For the veteran GTE PAX, it was just another weekend under physical and mental stress where you get to help another brother out by unlocking some potential in another man that didn’t know they had in them. GTE 30 PAX and PAX of F3 Nation don’t just be consumers, don’t be about self!  Do hard stuff!  Give this gift we have away! Encourage and unlock other PAX and if you have not registered for a GTE do yourself a favor, go register and take advantage of this awesome experiential learning opportunity. You will not be sorry! What’s Next? 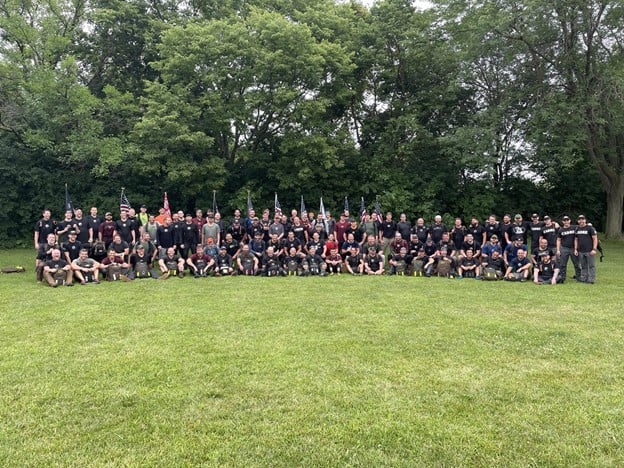 FYI… Pimp My Ride came out today to Three Rivers AO, where Kingbuilder beatdown happened, for his second official post.