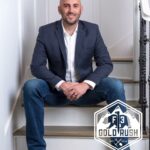 Italian Job recently caught up with ’88 out of F3 Gold Rush (Rocklin, CA) to discuss their expansive growth over the last year (from two AOs to 22 and single digit posts per week to over 60 per day, six days per week) and the secret sauce to EHing new men.

IJ: Formalities first, how’d you get the name ’88?

’88: After moving back to California after a six-year hiatus in the Carolinas, I posted for the first time in the Bay area in July 2017. I told them I was a Dodgers fan. Since 1988 was the last time they won the pennant at that time, ’88 was the name they gave me. Luckily, we took home the Championship in 2020.

IJ: How long before you joined the Rocklin PAX?

’88: F3 had zero presence in the area and I knew I wanted to plant as a Mustard Seed region when my family and I moved to Rocklin in June of 2018. Rocklin is 30 minutes northeast of Sacramento, two hours from San Francisco, and two hours from Lake Tahoe. I launched F3 Rocklin on November 3, 2018 as a Mustard Seed with a single Saturday AO and the support of F3 SF Peninsula and F3 Monterey. In June of 2020, we had grown to the point that a more regional name made sense. F3 Gold Rush became our name to include the surrounding towns we had grown into and still plan to expand to. In mid-August of last year, we were established as a full-fledged region within F3 Nation.

IJ: Speaking of growth, what has happened in Gold Rush in the past year?

’88: In our first 14 months, we were averaging single digit PAX totals each week. In February 2020 we started averaging double digits. By adding workouts on additional days of the week and diving into Q Source with purpose (thanks to our 1st F Q, Possum), our region really started to lean into F3. Layer in the pandemic beginning in March and the mixture of the three poured jet fuel to our growth. To show you the rate the PAX are EHing, February 2020 we were averaging 1 FNG a week. Six months later, the average went to 4.3 per week. Currently we are seeing 9.3 FNGs a week! This January brought us 35 FNGs and February added 35 more. Our current daily average of PAX who post to a workout is 65 PAX per day.

As far as AOs, we entered 2020 with two AOs. We then added 20 AOs from February-December of last year in order to keep pace with growth. We currently sit at 22 workouts a week (Monday-Saturday). By mid-March, we will add four more AOs to better serve our PAX and the men we have not met yet. In April, we are planting a shovel in Folsom, CA which will eventually become its own region once a local SLT is in place. This will be our first concentric growth region.

IJ: To what do you attribute the expansive growth?

’88: We view this growth a blessing and shows an obvious need by the men in our community for connection; as well as a place to belong and grow. The PAX on the SLT (Ponch, Rabbit, Possum, Hall Pass, Dinghy, Hydro, Bambino and YHC) have really focused on cementing the culture of building the 2nd and 3rd F. We feel like we do 1st F fairly well, training up greener PAX to Q, planting AOs, etc. We know that the 2nd and 3rd Fs are where the magic happens. The PAX also have seen value in the culture of F3. There is communication outside of the beatdowns, shieldlocks have formed and we’ve started a rucking culture here as we prep to host a GrowRuck in November. We have active COMZ – correction, very active COMZ – which is a good thing! We often remind our PAX that real connection is made outside the Gloom and not on a digital platform. January was 2nd F Month for us. Hall Pass (our 2nd F Q) lined up several chances for PAX to spend time together outside the Gloom and empowered PAX to Q these small events. To go along with F3 Mental Battle month, we are hosting two evening gatherings – one will discuss anxiety and depression the other will be focused on marriage (divorce, single dads, married to a M who has divorced in the past). Both nights will be hosted by PAX who are professionals in those areas. The past 12 months has all been word of mouth EHing and as men see value in what we have going on in Gold Rush and F3 as a Nation, they tell their friends. The more PAX there are, the more word gets around, the more FNGs posting. It’s fun to be a part of it.

IJ: It’s clear the 2nd F is booming. Tell us about your upcoming CSAUP.

’88: Saturday, March 6th is our first official CSAUP called “Hell Hole.” It’s named after a water reservoir in the area. We have a team of PAX who are planning and keeping everyone in a “need to know” status. What I know is it will be three plus hours of dirty, difficult, and dangerous. It will be held in the Auburn State Recreation Area about 25 minutes from the center of our region. This area is a mountainous state park often called the Confluence due to the two rivers that converge together. We will be on hiking trails, old fire roads, bridges, and even the remains of the old country roads. We will be running through streams that feed the rivers and up and down the terrain. Those who post at Hell Hole will be earning an exclusive patch. Afterwards, we will celebrate and tell stories of our experience at a 2nd F post-Hell Hole gathering over burritos. If you want to get an idea of where we will be, we have a promo video on our Twitter @f3goldrush. Be sure to check it out.

IJ: With Gold Rush rising, what kind of advice would you give other regions around the Nation looking to expand?

’88: For regions looking to expand within and grow, seek to develop your culture and make sure it’s in place. Start up a Q Source group locally if you are not doing it yet. If you are a newer region and have not set up a Shared Leadership Team (SLT), start that process today. For smaller regions, it might be to add another day of the week to establish a week-long schedule for your PAX, rather than this “thing” you do 1-2 days a week. If you are in an established region, work to develop highly capable Site Qs and plant shovel flags in new neighborhoods with an experienced Site Q. F3 is an organization that seeks to invigorate male community leadership, so by developing leadership within your region, you are better equipped to grow. If you are not currently on the SLT, you are not excluded from helping grow your region. Talk to your SLT or Expansion Q and see how you can help. They may ask you to Q more, plant a shovel flag in a new neighborhood, or share your ideas on how to grow. Be ready to accept the opportunity to lead. Growth is faster in some areas than others right now, but it is happening. Bing (the National Q of Expansion) gets multiple requests every week about how to get F3 in new areas. One of those areas might be near your region or our hometown where you might be in a great position to lead or support as needed.

IJ: Thank you for sharing and helping spread the culture of F3. If the men of F3 want to catch up and ask a few questions, how should they find you?

Outstanding, Gents. As the new 3rd F SLT member in F3 Puget Sound I am looking for 2nd F activities and events ideas, so thank you!
Cheers. Aye.
– Tardy

Great work to the men of Gold Rush and personally, a huge thank you to `88 as he’s always eager to help the F3 Nation SLT when looking to expand through-out all of the west coast. You are very much appreciated!

Outstanding ‘88 and the men of Gold Rush. Very inspiring. Thanks for the super charge to accelerate. GMO (St Louis)

I’m so lucky to be a part of this region. Our growth has been amazing and we are truly surrounded by high impact men.

Great job by all in the Gold Rush region. As a member of the SF Peninsula region who was present for the launch of Rocklin, it gives me great joy to see what you all have accomplished! SYITG!!

88 – awesome job. Glad i joined you a year and a half ago from Sunny coastal SSI GA.
you guys were hitting it hard then and to read how much growth since..amazing! hope to visit again soon. Chad Goehring 43, SIRI