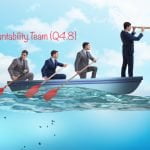 Setting And Maintaining High Standards Within The Team

In the Live Right we described how important individual Accountability is to the HIM in his effort to have IMPACT. There, we defined Accountability as submission to Standard through Enforcement and Consequence and explained that the HIM subjects himself to Accountability in order to continue his Acceleration. Through Accountability a man gets help in resisting his Jester, fighting through the Flux and avoiding the trap his Blind Spots set for him.

Team Accountability is based upon the same principle. Here, the Q applies the Team’s objective measures of performance to the Members by setting high Standards and maintaining them through Enforcement and Consequence. Teams, just like men, have Blind Spots–areas that they cannot protect without help. Teams, just like men, suffer from the Flux–the emotional peaks and valleys that periodically appear in our lives. Teams, just like men, are always in danger of becoming in-Effective unless they have strong Guardrails in place.

A Team without Standards will rapidly Decelerate and becomes static, which is the opposite of Dynamic. A static Team (at best) might morph into a Club (a Group that accomplishes nothing but continues to exist because its Members like each other) but will more likely disintegrate altogether, as it is the nature of the HIM to search for a Group that is Purposeful. Clubs are for Kimonos, men whose watchword is personal comfort rather than Mission accomplishment. They are not a likely place for HIMs to spend their valuable time.

To set effective Standards for his Team the Q must do more than just announce them or write them on the wall. He must weave them into the culture of the Team through constant repetition and reinforcement. It should also go without saying that the Q himself must be able to meet the Standards he has set for the Team. In fact, that’s too soft a statement. To Lead by example, the Q must exceed his Team’s Standards.

Exceeding Team Standards is no easy matter for the Q. Because he is responsible for Outcome, he has a higher level of obligation than that of the other Team Members and will have to spend much of his time Leading, making it harder for him to to engage in the daily Practices necessary to meet the Standard. It would be easy (and somewhat justified) for a Q to use that higher duty as an excuse to slip below Standard in a few places. He must have very strong Guardrails to avoid succumbing to that temptation. This is another example of why the four quadrants of the 3GL are progressive and sequential. The Bricklaying of positive Habits a HIM does in the Get Right is what will serve him in the Leave Right when his Leadership is tested by Pain and Chaos.

In Mutual Competence (Q3.2), I told the story of my battalion commander who maintained proficiency in the assembly and disassembly of the 50 caliber machine gun by working at it at night in his office when all of his other duties were done. Given all the pressure the man was under I would have certainly forgiven him for not going to that extent, but forgiveness is not really the point–follower-ship is, and he earned that from me in spades through his Commitment to the Standards of the unit.

Standards are meaningless if the Q will not Enforce them

If a Team does have Standards, but the Q can’t or won’t Enforce them, the Members will lose respect for his Leadership, which erodes the Trust necessary for the Team to Prosper. The same result occurs where the Q does not Enforce the Standards evenly between all the Members–loss of respect, leading to erosion of Trust, ending with disintegration of Team.

For Teamwork to thrive, it must be this way. Combined action that is efficient and potent requires each man to row the boat as hard as he can in the same direction. Any man who can’t or won’t meet the Team’s Standards is a threat to its Dynamism. If probation doesn’t work, then termination is necessary. The Q must absolutely be willing to apply a permanent Black Tahoe to a Member who can’t or won’t meet the Standard.

There are two broad types of Members who will test a Q’s willingness to execute a Black Tahoe. First there is the Kimono, the Member who places his personal comfort over the Mission. He is like a man with an oar in his hand who won’t row because it gives him blisters.

While the Kimono may not affect the health of a Community because that is a Group that is not going anywhere, he is an intolerable Flesh Anchor on a Dynamic Team. Because he won’t row, the other Members must row harder to carry him. Equally as bad, his presence in the boat keeps his seat from being filled by a man who will row. If a man can’t or won’t meet the Standard because he is focused primarily on his own comfort, he is a Kimono who the Q must Black Tahoe.

The second type of person who threatens a Team’s Dynamism is the Toxic, who is a Member whose Mission is misaligned with the Team. Unlike the Kimono, he is a man who will do something, just not the right something. He is like a man pulling powerfully on his oar in the wrong direction. In this sense, the Toxic is worse than a Flesh Anchor because he forces his Teammates to row against him rather just pull his dead weight along. As with the Kimono, the Q must subject the Toxic to the Consequence of the permanent Black Tahoe if probation does not work.

If the Q doesn’t prune Kimonos and Toxics from the branches of his Team, they will ultimately cause the tree to wither. Which is not to say that either is a “bad” guy. A Kimono might be a lovely person who remembers everybody else’s birthday without a LinkdIn prompt. But he’s weighing the Team down and will eventually cause it to Decelerate. The Toxic might be a highly skilled man with a Missional heart, but his lack of alignment makes him a football bat. On the right Team he might be a HIM, but the Q must recognize him for the menace he is to his Team’s Dynamism and take action.

The Q does not quit on the willing

Employment of probation and termination as the Consequences for failure to meet Team Standards may sound draconian on paper, and it would be in practice as well if not tempered by the desire of the Virtuous Leader to see every Member of his Team reach his potential. For the Q, there is a difference between a man who can’t–as opposed to a man who won’t–meet the Standard when it comes to the duration and objective of probation.

For the Member that wants to meet the Standard but can’t do so, the issue for the Q to determine is whether it is possible through training or reasonable accommodation to turn can’t into can. If he believes it is impossible (due to the man’s hard-wiring or the limits of the Team’s time or resources), then there is no point in dragging out the probation. It won’t help the man or the Team to delay the inevitable Black Tahoe. But if it is possible, then the Q employs Positive Habit Transfer to help the man Accelerate toward the Standard. In that case, the probation should last as long as the Acceleration does. The Q does not give up on a Member willing to Accelerate as long as it is possible that he might meet the Standard if he continues to work.

Won’t however is different than can’t because it does not give the Q much to work with. If a Member can meet the Standard but volitionally chooses not to because his determination to remain a Kimono or Toxic trumps his willingness to conform to Team Standards, then the Q has little choice but to try to Persuade him to change his priorities. In that case, the probation should last as long as the Persuasion seems to be having some effect.

In my experience (and this comes from both the Q and Member side), the won’t-probation need not last very long. I’ve seen a handful of Toxics conform, far fewer Kimonos, but very few of either. And, while I don’t think I’ve ever been a Kimono, I’ve certainly been a Toxic and the Black Tahoes I have received have been good for both me and the Team. In fact, I’ve become pretty quick to Black Tahoe myself when I see that my Purpose does not align with the Group because I don’t want to burden the Q with having to do it.

In the very first QPoint (Disruption), we pointed out that a great Leader’s Legacy is built on love. If a Leader does not love his followers his Influence will not outlast his physical presence. This is why the Q does not give up on the Members of his Team who are willing to Accelerate to Standard. Not only because he recognizes that it would be to the Advantage of the Team, but because he loves the man and wants the best for him.

a must read for every HIM! Papa Smurf