New pictures by TD and the video via Bunny added; this should be it!

When we finished this event not as three F3 teams but as one F3 team, I felt tears welling and a sense of peace, tranquility and love I can not describe. I have been blessed by being a part of this GORUCK group, by being a small part of F3, and this moment… a defining time for me and I hope others.

Many of you thanked me after and in your notes for the Backblast. I heard and am humbled by each one… it was you who carried me during 421.

Hope you enjoy this look back at what is truly an epic event. As anyone who is on the class 421 distribution list knows, there were some really long notes and personal tales of triumph. Between replies and notes sent to me personally, I got over 110.

I appreciated reading them all, and I’ve edited here for brevity and to try to weave the story like a conversation. (And yet if anyone makes it through all this BackBlast, that in itself is endurance reading.)

Contact me directly if you have questions or update suggestions.

The full video is at the page top — thank you Bunny (obviously the Bunny that was NOT doing the Challenge, since we haveÂ discovered we have two bunnies.)

Thank you for this trailer, Fonzie. Intro: Coordinating the three F3 teams required more spreadsheeting that I anticipated. We started with one team, then two, then added a third. Payments. Waivers. “Are you registered with GORUCK?” Oh, we can get free t-shirts? Don’t forget sizes! Email lists? Workout groups? Done, done, done, and done. All in, we would head to the starting line with 80.

#TClaps to @sleuth, who Qed effort to get #GORUCKers to the start with patience and perseverance. Think #cadre will show same #TLC?

Hour Leading Up to the Event ‘@trippdavis_f3td: I’m headed over to AG pretty soon to begin tailgating for the GRC festivities.’ I’m on my way with several beverages. – John Dillard (@johndillard) February 17, 2013

Good luck to all the F3 brothers about to crush #SnowRuck embrace the suck! – Joe Kenny (@JFK_Hyannis) February 17, 2013

#CadrePatrick telling the #GORUCKers to take their earmuffs off so they can hear the health & safety briefing. – F3 Nation (@F3Nation) February 17, 2013 Intro: Once we lined up for the first time, the Cadres threw the first surprise at us — we were not splitting up into the three teams AP had set up. And just like that, the SmokeFest was on… low crawls, planks, merkins, Jack Webbs, partner carries, etc. for two+ hours.

“@cadrepatrick: Warm and toasty in Charlotte. twitter.com/CadrePatrick/s…”And that was at the beginning. – DREDD (@DreddCNC) February 18, 2013 Intro: Not much was posted in the email threads about this sidebar, but the continued movement up and down the stairs was a painful “break” right after the AG SmokeFest.

March to Queens & Queens, then up to Panther Stadium 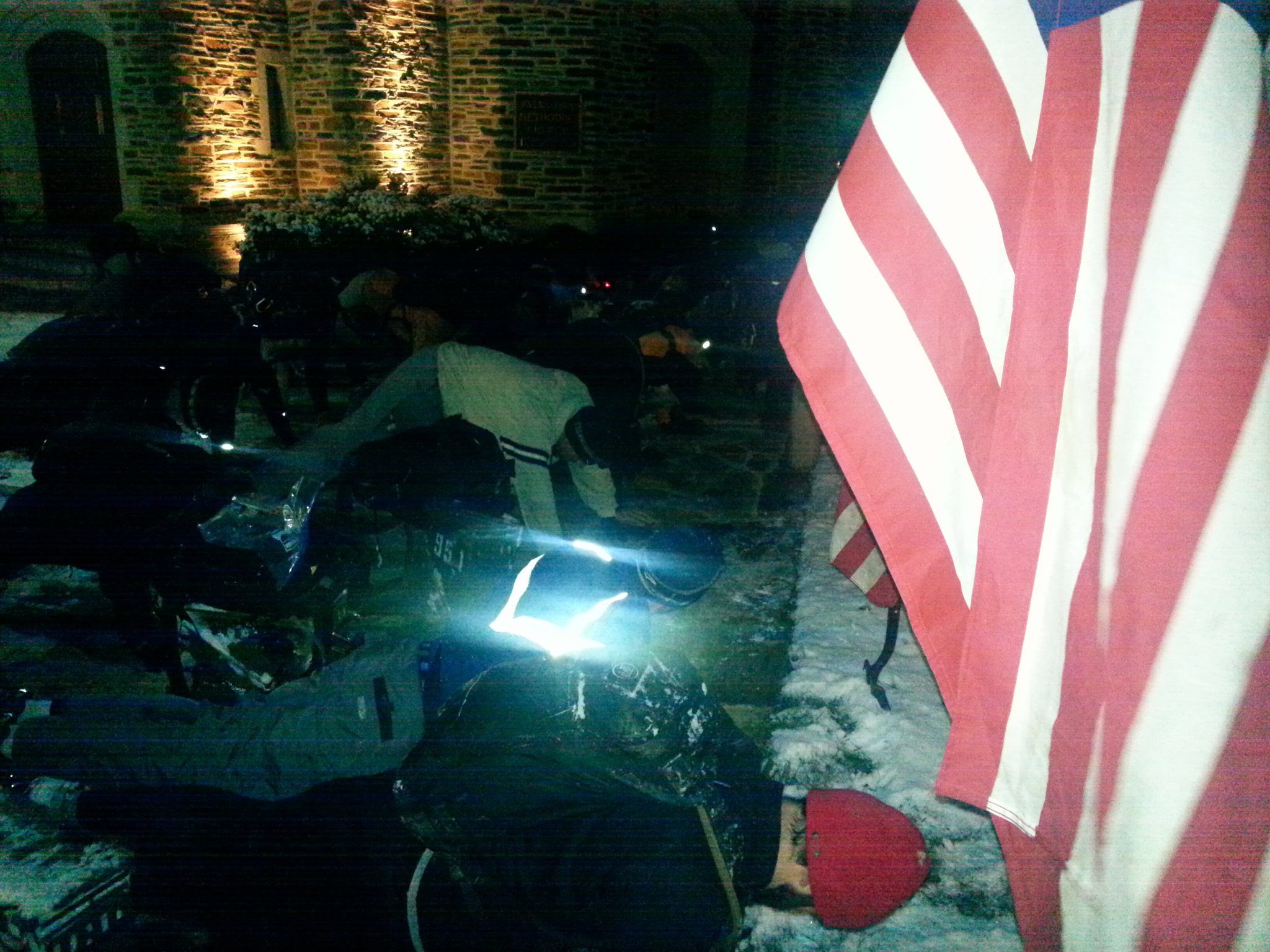 Intro: After the pain duo in Myers Park, the march to the “Gold Guy” statue was on. We were told only that another team was heading that way, and we better not lose. A quick break went bad briefly at MPUMC, and we were off up Morehead for what’s now being called the “Morehead St. Beatdown” aka “the Piss Party.”

Intro: We’d just been smoked and had a piss pep talk via Dredd, and yet it was very clear now no one was going to quit on anyone. But we still had miles to go, and a new leader emerged. Intro: One of the most familiar places and workout locations in Charlotte turned into five PAINstations, a rescue/recovery mission, snowmen, tree-hugging, and a dip into the cold. Intro: After a dip, the hike back to our original location seemed lighter in spirit for most. Charlotte was waking up, and our audience grew. Some PAX started having issues with the cold again while others started dying off (ok, GORUCK dying off).

Looks like they’re at the point in the game where the cadre is “killing” pax and making the others carry them in. – F3 Nation (@F3Nation) February 17, 2013 Intro: The general consensus was the waiting crowd saved us from yet another SmokeFest, especially given we stopped only 50 yards short of AG and families were watching.

Congrats all #GORUCKchallenge members of @f3nationCan’t wait to read the backblast and hear some stories. #GoodLiving aye. – Hawaii 5-0 (@F3_FiveO_jlay) February 18, 2013

In case you may wonder what it took today to become GORUCK tough twitter.com/sleuth/status/… Intro: So many had positive things to share I had to create a section just for shoutouts.

If you’re on Facebook make sure you join “GORUCK tough” and “GORUCK skymall” groups where you can get fun patches. twitter.com/SoCalF3/status…

I’ve always said to myself that I could accomplish whatever I set out to do.After last night @goruckchallenge, I believe it to my core. – Matt Martella (@mattmartella) February 18, 2013

Is anyone else who did @goruckchallenge a little sore today? And by “little” I mean “feels like you drove a Yugo off a cliff and survived.” – Kevin Lock (@TheKevinLock) February 18, 2013

Number of the bus that hit you was 421

Already Talk of an Upgrade Next Time? Intro: The BackBlast email thread got hijacked by Bunny and others getting ready for Heavy. I saw commits from Bogey, Ballistic, Evinrude, Durango, Caesar, Mutiny, Red Warrior, Ice9, Blue, and more were coming in. Good luck gents.

Scroll back to top